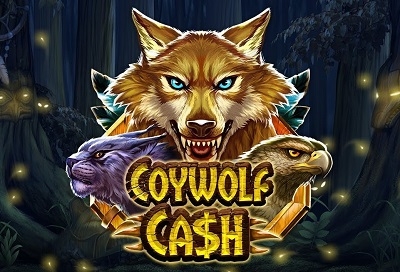 Play’n GO’s Coywolf Cash online slot gives players two different wild symbols with different payouts that can show up in different situations to give players various ways to get paid. This is because they are tied to special wild reel features that move across the game board horizontally to drop complete reels of matching wild symbols and more.

An Introduction to Coywolf Cash

The issue with many slots today is that they don’t go outside of the normal format or feature set all that often on average. Play’n GO’s Coywolf Cash video slot bucks this trend by offering a much different style of play thanks to some innovative features, but that’s not all:

These features break away from the super-rigid ideas that most people have about how video slots have to play on the format side, and this gives players a refreshing experience that’s different than most.

The theme here is a bit of a nature or Native American concept that’s focused on animals and imagery. It looks solid, and every symbol in the game has been crafted in a way that fits with the overall visual appeal.

Additionally, you get a play style that has a high level of volatility, which is different than what’s trendy with low-volatility titles with super-smooth swings that don’t really give you major chances to take down big pays.

Betting is made really easy to understand in this game, and that’s typical of what this software developer brings to the table. Here’s what to expect:

We also want to take this opportunity to point out that the convention for listing how big the payouts are comes from multiplying the total bet by the given prize. If you want to know what it would be if it was based on payline wins, then you can multiply the given value by 50.

The feature set is really what this title is all about, and in the Coywolf Cash online slot, you’ll find that the regular pay table is really eclipsed by how these features come into the gameplay.

There’s a mask scatter that only appears on the middle reel, and it has a blue-green face with golden features and its tongue hanging out. This symbol activates the Wild Reel feature no matter where it shows up.

The way this feature works is that the top row will turn into a rotating series of symbols that can bring up to three wilds.

You can get up to three wilds in this top reel, but when they appear, each of them will expand vertically to cover the entire reel.

What this means is that you can get up to three reels completely filled with wilds. With 50 paylines activated, you don’t need us to tell you how much value that is and how many really serious payouts you can get all at the same time from what this feature offers. That’s on top of the wilds that could appear otherwise.

Note that if you have scatters that these wilds cover up, then you’ll still have them counted. Also, it’s the alpha coywolf symbol that this wild becomes, which we’ll get into down below on the differences.

There’s a totem symbol that looks like a jackal sticking its tongue out, and he shows up on each of the five reels. The key thing to know here is that three or more will give you free spins in the following amounts:

During this feature, the mask scatter on the center reel works differently. Instead of giving up to three of the alpha coywolf expanding symbols, you can get up to four. On top of that, you’ll have a chance to hit a second tier of that horizontal reel by getting a mask on there that’s not normally there during the default game.

Once you get to this second tier, you can win wild multipliers worth up to 7x that will cover the entire center reel or an additional 2 or 4 free spins added to your total.

There are actually two wilds in this game. One is the alpha coywolf with the ice motif, and it gives you the following pays:

We also have the regular coywolf wins:

If you get mixed combinations of wilds, then they will simply count for the regular coywolf wins.

Note that these wilds do not count for either of the scatters in this game.

How to Win at Coywolf Cash

The volatility being so high is kind of misleading in this game because the hit-rate is so serious thanks to it having 50 paylines packed into a 5×3 grid of symbols. As a result, you may be tempted to increase your bet size because of the perception that this title will not have serious swings.

Unfortunately, it’s actually the opposite that’s true. Because of the tremendous amount of value held in the bonus features, you’ll have more serious swings than usual. There aren’t really anything like two of a kind wins to help temper this down a bit, so you can really only deal with it in one way.

That one way is anti-intuitive, but it’s actually to use bet sizes that are on the smaller end of the range that you would typically be comfortable with. This will help you to weather the big swings, though it can be paired with playing more spins than usual with the autoplay option or just spamming the space bar to get in the same amount in total wagers that you would have otherwise.

After the wilds, there are five animal symbols. The blue bear is worth 1.6x, and that’s the same win for five of the red badger symbol. The purple bobcat is worth a solid 1.2x win for five on a line, and five of a kind combinations of the green falcon is worth 1.2x as well. Five of the orange fox gets you 0.6x.

This is where things stand with 0.6x for five of the wooden A symbols. Finally, five of a kind combos of the wooden K, Q, J or 10 symbols are each worth 0.4x payouts.

The Coywolf Cash online slot by Play’n GO has a theme that isn’t particularly original, but it’s still executed in a really solid way. On top of that, the gameplay really stands out as being atypical and action packed. As long as you can handle the high volatility, this is most certainly a game that a lot of players will find appealing.