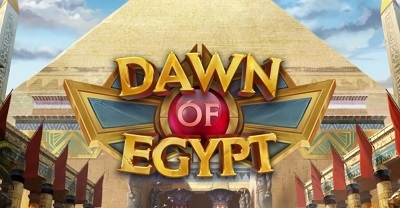 Play’n GO knows how to make a game really break out of a sub-genre, and that’s what they did with the Dawn of Egypt online slot and the Egyptian-themed genre of slots. This game features a different style of free spins with upgraded symbols along with a multi-tier bonus round that can give you much better payouts than the usual game.

An Introduction to Dawn of Egypt

If you’re the type of player who likes games with different approaches to features and gameplay, then the Dawn of Egypt video slot is definitely a title to check out.

Although this title uses an Egyptian theme, which is generally considered overused in the industry, Play’n GO was able to make players forget about that because of the exceptional graphics and gameplay.

The feature set is handled in an incredibly smart way, and it pairs up well with a balanced pay table that gives its own high hit-rate.

It’s also worth pointing out that the graphics are among the best in the sub-genre. It has a whole style and look that’s a bit different than what you usually see with how the animations and graphical representations of deities and other symbols are handled, and that’s something that stands out as well.

This is a slot that uses a format that lends itself to a moderate style of play in terms of it not having an overwhelming number of lines that are difficult to keep up with. However, with the high hit-rate this title has, it’s more than enough action for the vast majority of players.

In terms of volatility, this title is in the fairly low range. This comes from a combination of the balanced pay table and high hit-rate. With that said, there are still some big opportunities to take down serious paydays in this slot because of how the features work, and that’s the kind of thing that’s easy to look forward to.

The feature set for the Dawn of Egypt video slot centers around simply giving players a lot of ways to win while they try to hit the big payouts and the main bonus features.

First off, we have the scattered pyramid symbol. This is gold with the Eye of Ra on each side one with glowing blue corners.

It shows up on each one of the five reels, and it gives the following payouts:

As is the case with all payouts in this listing, the wins are all multiplied by your total bet size. You can multiply it by a factor of 10 if you would like to know what the equivalent bet line wager payout would be. Also, the wins for the scatters can be triggered no matter where they land on the game board.

There’s a scarab symbol in the Dawn of Egypt online slot that appears in a dark blue with red gems and a golden trim. This is the wild, and it also shows up on each of the five reels.

Here are the payouts for winning combinations that consist only of this wild symbol:

Something we want to point out is that the wild symbols will count for any of the other symbols in the game except for the scatter. However, this concept is played with in the bonus round, which we’ll get into down below.

If you get three or more scatters on the reels at once, then you’ll be taken to the Wheel of the Gods. This wheel will choose the number of free turns that you are initially awarded for the feature.

Players can pick up between three and 20 free spins, chosen at random, for this feature.

During the free spins mode, you get a special symbol upgrade feature. All of the mid-range and upper-tier symbols (ie: all non-card rank symbols) will be randomly upgraded to a better-paying symbol for better chances at larger winning combinations.

Also during the free spins, there’s a special red scattered pyramid that also appears as a wild symbol. It has special properties that include its own set of payouts and the ability to trigger a second stage to the bonus round. This wild scatter has the same wins as the regular wild.

Pick up just two or more of the wild scatters during the free spins mode to trigger a second round called Pyramid Spins. You’ll get up to 20 of these spins, and they will keep the symbol upgrade that you were granted from the free turn that activated this second feature.

Note that you an also re-trigger this feature over and over with just two or more of the wild scatter, and then you will go back into your normal free spins mode to pick up where you left off.

How to Win at Dawn of Egypt

The key thing to understand about this game is that there are two scenarios where you’ll usually walk away with a big win. The first is if you get five of the scatters, and the second is if you trigger one or both of the free spins mode.

To maximize the chances of getting bigger payouts while taking advantage of the low volatility, you can increase your bet size a little above what you would normally use. This will put you in a position to really take advantage of the big features or payouts when they hit without having to deal with big swings because the low volatility will keep things smoothed out.

Payout Structure for Dawn of Egypt

The two figureheads pay 100x for the golden square and 40x for the green square for five of a kind combinations. From there, the purple cobra emblem or green scorpions will be worth 20x when you line up five on a payline. Mid-range wins of 10x are available for five of the blue ankh or purple lotus as well.

Rounding out the bottom end of the pay table are four card rank symbols that all pay the same 5x win for five on a line. They include the red A, green K, blue Q and yellow J symbols.

There’s no shortage of things to look forward to in the Dawn of Egypt slot. The balanced pay table keeps the volatility pretty tame, but the bonus features and chances for a massive scatter win also give you opportunities to run up some serious payouts.

This title stands out in the Egyptian sub-genre for both the visual appeal and gameplay style. The tiered free spins in particular are much different than what players get to see, and having the scatters and wilds come together during the bonus feature (combined with the symbol improvement feature) give this title its own unique flavor.