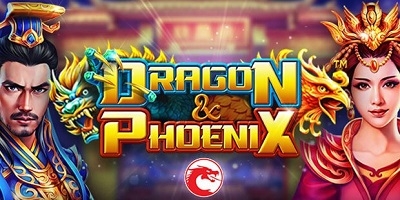 The Dragon and Phoenix online slot by BetSoft features an Asian theme with a royal couple signaled by these two mystical creatures. Filled with mythological imagery and references to luck- and wealth-based symbols, this title delivers both from an aesthetic viewpoint and from the strong gameplay that it provides.

An Introduction to Dragon and Phoenix

People love a real power couple in any kind of media, and that’s something that BetSoft has played on with their Dragon and Phoenix video slot. This title avoids focusing on just a single member of the monarchy, instead preferring to focus on the king and queen together as a mythological unit.

The dragon and phoenix from the title correspond to the king and queen, and this theme is sewn in and out of every single aspect of this title, giving it a very cohesive feel for an immersive experience.

The look of the title mixes traditional video slot motifs with an Asian appeal. The focus is on symbols of wealth and luck, which fits well with the overall theme. There’s also a gorgeous palace background that the reels are in front of that really pulls the aesthetic together.

In terms of gameplay, this is an action-oriented title that doesn’t go too far outside of the box to the point of being unfamiliar, but it does give a different way of handling key mechanics that give it a relatively unique flavor.

BetSoft has set up this title in a way that it’s pretty easy to jump right into without having to learn anything new. Here’s what you can expect from the overall format:

It’s worth pointing out that all of the wins in this game are multiples of the entire bet size. This is opposed to the system based on line bet wins that can make it confusing to know how much you’re actually winning when you line up a paying combination.

There is a lot of action to be had with the way the features work in the Dragon and Phoenix online slot. While there aren’t a huge number of features, the ones that are available are very important and put you in a position to engage with them often. This is the core of the gameplay for this title.

On the second, third, fourth and fifth reels, you can see a symbol appear that is the royal couple. The king is dressed in blue, and the queen is dressed in red. These are the characters referred to in the title of the Dragon and Phoenix video slot.

What’s important to note here is that these symbols have a random chance to expand to cover an entire reel. If that happens, then your chances of winning drastically increase.

It’s also important to point out that if the wild expands to cover a space on the game board where scatters had landed that the scatters will still count toward your total for what they bring to the table, which we’ll look at below.

These wild royal couple symbols do not get their own payouts since none of them appear on the first reel. However, they clearly make it much easier to get paid in general, and they specifically make it easier to hit multi-line wins if you get the expanding versions.

A lot of the gameplay for this title centers around the golden money tree scatter symbol. Unlike the wild noted above, this scatter does appear on all five reels. It can also appear stacked two or three spots high on the reels.

You will get paid for getting at least three of a kind of this symbol, and a large prize of 50x is yours for filling up the entire game board with them for a 15-of-a-kind combination.

As you’ll see below, they are also responsible for helping you to get free spins.

Whenever you get a minimum of three scatters on the game board at the same time, you will trigger the free spins mode for this game.

The number of free spins you get is determined by the number of scatters that appear on the board to trigger the feature.

This means that you’ll get from three to 15 total free spins at a time. However, you can re-trigger the free spins over and over again by getting three or more scatters while you’re already playing free turns. These will simply be added to your total number of free spins for the feature.

How to Win at Dragon and Phoenix

The real value in this game is tied up in the scatters and the resulting free spins. As such, you’ll want as much exposure to those features as possible, and that means getting in a lot of spins.

One way to facilitate this is through the auto-play option. This can play much quicker than usual for many players, and that allows you to get in more spins during a session of the same length. Some players find that dropping their bet size slightly makes them more comfortable with this type of approach.

Payout Structure for Dragon and Phoenix

The top of the pay structure for the Dragon and Phoenix online slot are, appropriately enough, the blue dragon and red phoenix symbols. They each pay along the following lines:

It’s worth noting that these are the only two symbols that pay out for just two of a kind in a combination. It’s also worth pointing out that they are treated equally here, which is a part of the overall theme of the game.

The mid-range symbols include the golden ingot for 25x for five of a kind, and you can also pick up 20x for the red and blue 88 symbols, which are a symbol of luck.

Finally, the blue A, purple K, green Q and red J symbols all pay values ranging from 4x to 2.5x for five of a kind combinations on a payline.

BetSoft’s work with the Dragon and Phoenix video slot shows what can happen when a game is produced in a way that all of its elements, gameplay and visual, are combined into one cohesive story and motif. This results in an excellent experience for players while maintaining lots of ways to get paid through the regular pay table and feature set.

If you like games with a reasonable volatility and a slightly different style of gameplay with the functionality of the scatters here, then this is a title that will likely appeal to you since that’s exactly what it brings to the table.