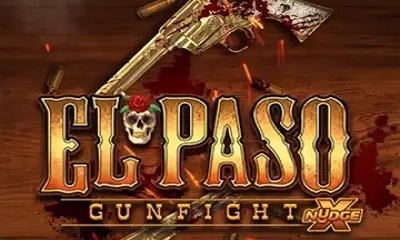 Nolimit City’s El Paso Gunfight online slot is a very immersive game with a lot going on. You can choose from different stances, which change the format of the game. On top of that, there are several features and ways to get paid, and that drives a ton of action.

An Introduction to El Paso Gunfight

Nolimit City has a lot of interesting games based on a variety of gritty themes. The El Paso Gunfight video slot fits this number in a major way. They’ve offered a game with the features, aesthetics and feel of the Wild West.

What’s most impressive about this game is how cohesive it is. Every single aspect of it comes together to offer players an experience that feels right.

On the visual end of things, you have a saloon bar background. Bullet holes and bottles line the shelves and the wall behind the reels. From there, the characters created for this game are designed in a way that makes them really pop out. The other symbols, even the card rank symbols, fit the theme perfectly as well.

This title’s gameplay is where most players will really put their focus, however. The reason for this is that the combination of the format, theme and features drive a serious amount of action. There’s no shortage of ways to win and features that can be around the corner at any time.

This game actually has two different formats that you can choose from. They offer two different levels of volatility because they line up some of the bonus symbols differently. With that said, it’s much less complicated than it sounds and is actually really easy to get started with. Here’s what to expect:

Your volatility options are described as “high” and “extreme” in the game. However, compared to other games, it’s more like “medium-low” and “medium-high,” respectively. We’ll get into how you can adjust to each of these volatility settings further down below. With that said, understand that these settings don’t fundamentally change anything else about the experience.

The El Paso Gunfight online slot has a lot of features. There are so many that we highly recommend learning about them before playing. Even a brief overview will give you so much more of an idea of what’s going on when bonuses hit.

The xNudge style feature has to do with nudges that happen to stacked symbols. In this game, it happens to stacked wilds that appear on the middle three reels. Stoudenmire is the man on the wilds, as it says at the bottom of the symbols. He’s wielding a pistol in those symbols sometimes, so he clearly means business.

When it appears on the reels in any capacity, it will always nudge into position to cover the entire reel. However, this is the key to a multiplier feature. Each nudge adds one to the multiplier value for that wild. From there, any winning combination that uses that wild will have its payout multiplier appropriately.

Note also that these wilds substitute for everything but the scatter symbols and the badge symbols.

There are two raid features in the El Paso Gunfight video slot. They’re each based on the badges that show up for the deputy (a silver star) and the marshal (a golden shield).

The same thing happens for the golden marshal badge. However, instead of acting on the low value symbols, it applies to the high-end ones.

If you’re able to land both badges at the same time, both of the above rules apply. However, there are two changes. First, the game format opens up to have four symbols on the first and last reels for 432 ways. Second, both badges will act as pure wilds instead of how they behave in the above.

Scatters in this game are skulls with golden decorations along with a rose and two pistols. If you land three of them across the middle three reels, you’ll trigger the Gunfight Spins feature. Note that it doesn’t matter the position of those scatters as long as they’re somewhere on those three middle reels. Additionally, you’ll always start with eight spins in this feature.

The main difference to start with in this bonus game has to do with the scatters. They become wild symbols that jump around to new positions on each and every spin. Also, getting either of the badge symbols will add an extra free spin to the total. Additionally, the stacked wild on a jumping wild will double the multiplier for each jumping wild it covers.

This is the base free spins feature, but it can be upgraded into other versions as follows.

If you get three scatters along with one of the badges in this bonus feature, you’ll upgrade your spins. They become Deputy or Marshal Gunfight Spins, respectively. They trigger with nine free spins, and you’ll have one major difference from the previous mode. When the badge features trigger, it stays in position and triggers that feature for the rest of the free spins.

However, if you get both of them, you open up to the Drunken Gunfighter Spins. This gives 10 free spins with the larger 4-3-3-3-4 format. The Stoudenmire wild will lock in place, keeping its multiplier, if it lands on a jumping wild in this feature. It stays in place for the rest of the spins, offering some major value.

A couple of other random features can be had in the main game. Here’s a brief description of what the El Paso Gunfight video slot has to offer in this arena:

These add a bit of flavor to the game without getting too far off into the depth that you see with the other features.

How to Win at El Paso Gunfight

Something really cool about the El Paso Gunfight video slot is that you can decide between two different volatility levels. Despite their in-game descriptions being “high” and “extreme,” neither are all that high. The “high” option is actually medium-low with all things considered. Similarly underwhelming is the fact that the “extreme” level is about medium-high with all things considered.

Adjusting to these volatility levels is all about adjusting your bet size to the change in swings. For the “high” option that’s actually medium-low, a good adjustment is to increase your bet size by about 33 to 50 percent. Likewise, for the “extreme” option, you should decrease it by this amount instead. These are really simple adjustments that will make your experience go much more smoothly.

Aside from the wild, there are four different character symbols. Campbell in red pays 6x for five of a kind. You can also earn 3.2x or 2.4x for five of the blue Krempau or green Hale symbols. Finally, the bystander in brown gets you 2x for five. What’s critical about these four symbols is that they are stacked three spots high. In a game with so many ways to win, that helps with getting multiple payouts per spin.

The five lower-level symbols are all card rank symbols that fit the theme with a font. They’re all in gold, and they start off with 1x for five of the A. The K and Q get you 0.92x and 0.88x. Finally, things wrap up with the J and 10 giving prizes of 0.84x and 0.8x for five of a kind.

Because the El Paso Gunfight video slot brings a serious degree of quality while still standing out on its own, this slot fits perfectly in Nolimit City’s portfolio as a whole. The driving concept used as the basis for this slot is a central launch pad for the gameplay experience and excitement, and what slot players will absolutely enjoy with this game is the additional padding that the plethora of features add to your bottom line.

The play style in this title gives a whole lot of fun. It’s also worth noting that the presentation and aesthetic appeal of this slot offers a lively vibe that’s definitely competitive with much that the online slots industry overall has going on.