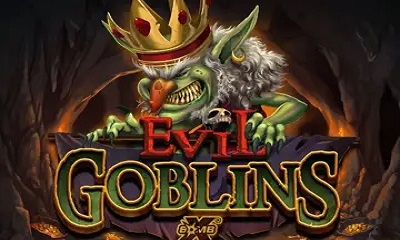 The Evil Goblins online slot by Nolimit City is a feature-filled high fantasy adventure. With 729 ways to win and a ton of action-oriented features, this is a game that’s definitely for players who like to have a lot going on in their play with many ways to win.

An Introduction to Evil Goblins

Goblins are one of the most important evil races of the high fantasy genre. While there are some exceptions, they are generally seen as living underground with lots of treasure. The Evil Goblins video slot from Nolimit City really plays on the characteristics of these little green individuals.

What we really like is how all of the features, format and gameplay come together around the goblin theme.

You’ll have lots of features in this game, as we mentioned above. Additionally, it’s what the gameplay is pretty much all about. However, the hit-rate of the regular pay table is pretty good thanks to the format. As a result, you’ll have a lot of opportunities for wins at the low, medium and high levels.

The presentation of this slot is up there with some of the best in the genre. You’ll find yourself in an underground cave with torches showing the way. Bags of treasure, skeletal remains and other spooky elements really make the game come alive. On top of that, the different types of goblins shown on the game board actually matter when it comes to the features, which is something we think is really well-done.

In many online slots, the format is a bit of an afterthought and isn’t particularly important. However, that’s not the case in this game. Instead, the format is a key part of how the gameplay works. Here’s what you can expect:

What you’ll notice when you start getting into this game is that there’s always something happening. Chances for features are constantly coming into play, and it can be a lot to keep up with. However, it also leads to a high hit-rate. Combined with the balanced overall pay schedule, you end up with a medium-low volatility overall.

We also want to point out that the wins in this game are all based on a multiple of the amount wagered, so it’s really easy to know exactly how much you stand to win with different combinations. This avoids the complications that coin-based and line-based win calculations can bring.

The wilds behave a bit differently in this title than what you normally see. However, for how they substitute for wins, it’s mostly the same. Three types of wilds can appear, and they are skeletons in three different orientations with different color sets.

First off, these wilds appear on the second through sixth reels only. They can substitute for everything but the scatters. However, since they do not appear on the first reel, they don’t get their own paying combinations.

With that said, they have a lot of value thanks to the 729 ways format. They can substitute for multiple symbols at the same time as well. This means they can help to get wins you wouldn’t have picked up without their help while also extending the length of existing wins depending on where they hit on the reels.

The second major thing the wilds do is called the Resurrection Wilds Feature. When you get three wilds on the game board at the same time in any position, they activate this feature. The idea here is that one of the wilds will be given a huge multiplier. Additionally, the size of this multiplier depends on the number of wilds that landed on the grid:

This is the largest source of variance in the game. However, because the rest of the pay schedule is so incredibly balanced, it doesn’t swing the game into higher levels of volatility.

An avalanche feature is used in the Evil Goblins video slot. On each spin, all winning combinations disappear after they are paid out. As a result, new symbols fall into place to give you chances for new wins. Additionally, the process continues over and over until you reach a position with no new wins.

Note that these avalanches are free, and you are not charged for additional spins for them.

You’ll notice that goblins randomly appear over four of the reels at the top of the game board. When this happens, you have chances for them to match up with a symbol on their respective reel. This occurs when you match the same goblin on the reels with the one over the game board.

If you get a match, it triggers the Goblin Sacrifice feature. Essentially, it turns those symbols into wilds.

When you match all four of them in this way, it triggers the Evil 4 Feature. This is essentially a chance to get multipliers for your spin and remaining avalanches. The multiplier starts at 4x and increases according to however many matching goblins you’re able to pick up for the king goblin symbol.

The bloody “S” symbol is scattered, and they only land on the middle four symbols. Getting three or four scatters will give you eight or nine free spins, respectively.

You start in the Fresh Meat Spins. This gives you guaranteed wild symbols and a higher chance of getting the Goblin Sacrifice feature. However, if you trigger the Evil 4, you’ll transition into the Goblins Feast free spins mode.

The main difference here is that the multipliers will stay activated for the remainder of the free spins mode.

How to Win at Evil Goblins

With the balanced play style, getting the most from this title is all about adjusting to the volatility. Additionally, since this volatility level is in the medium-low range, you have a straightforward adjustment.

For most players, we recommend slightly increasing the size of your wager above what your average typically is. A small increase of about 25 percent is sufficient for this adjustment. While it’s completely optional, the idea is easy to understand. You’re getting better payouts due to the wager being higher. However, your overall swings stay pretty reasonable since you’re starting with a below-average volatility to begin with.

Five goblin symbols make up the top payouts. You’ll notice that the pay table is super balanced, and the top pays are all actually pretty close to each other. It starts with the goblin king in red with his 3x win for six of a kind. You can also get 1.5x or 1.2x for six of the orange or green, respectively. Additionally, six of the blue gets 1.1x, and six of the purple earns players a 1x payout.

From there, the card rank pays round out the prizes. They have a really nice font that fits the high fantasy theme perfectly. However, their six of a kind wins also pay 0.9x down to 0.4x.

The gameplay style for this slot brings a ton of excitement. We also want to point out that the range of features includes plenty of different extra ways to win prizes outside of the normal pay table offering.

The aesthetic appeal of this title is top-notch and enhances the overall play style, and since this game gives a serious level of quality while still having a tremendous amount of value individually, this video slot fits tremendously in this developer’s selection of games as a whole. As if that wasn’t enough, the concept is put together in a really intelligent way in this video slot, as opposed to it only being a non-critical part of the game like what players see in most online slots.

Which online casinos have Evil Goblins?

What is the Return to Player (RTP) for Evil Goblins?