Fire in the Hole Casinos and Review 2021 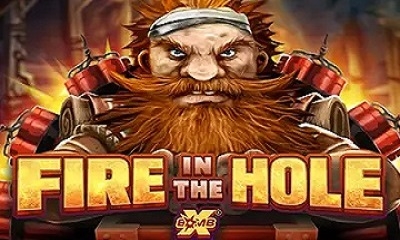 The Fire in the Hole video slot from Nolimit city takes you into a dwarven mining operation. This plays into the game mechanics as well as the features. Players get tons of ways to get paid between the regular pay table and the feature set in this game.

Casinos with Fire in the Hole

An Introduction to Fire in the Hole

Something we really like to see players enjoy is atypical game mechanics. So much has been done with the same old mechanics for so long that we love seeing something new. However, it can’t be too far outside of the box. Otherwise, players won’t really take to it.

The Fire in the Hole online slot from Nolimit City balances this perfectly. It offers a different style of play with an atypical game mechanic. However, this mechanic isn’t so much different than it alienates players.

The visual appeal of this title is evident from the first time you open it. The graphics style is very strong, but the look also fits the theme and gameplay really well. From there, you can tell that each individual symbol was crafted with a lot of detail as well.

With the gameplay, things are a bit different as we mentioned above. We’ll get into details in the following, but here’s the thing to know. The style of play fits the theme perfectly.

Betting in this game is slightly different than usual because the format is so different. Here’s what to expect:

This slot has a pretty high hit-rate. Between that and the balanced pay schedule, the volatility is in the medium-low range. It’s not the lowest that you’re going to find out there, but it’s certainly below average.

It’s also important to note that the payouts are all based on the total bet. That means that something like a 3x win means that you pick up a payout worth three times your overall wager.

The Fire in the Hole online slot has a few features that stand out as being pretty atypical. However, they’re pretty easy to get the hang of. We’ll show you everything you need to know to get started in the following.

You start off each spin with the top three rows of the game board available. However, the mine can collapse for a level, which opens up another row of symbols. This gives you many more opportunities and ways to win.

This type of collapse can happen in a few different ways. We’ll get into some of them down below, but the main one that happens the most often is any win. When you hit a win, it’s paid out as usual. However, those winning symbols explode, and new symbols fall into place. However, another row will also open up, and those positions will be filled as well.

What you essentially get is almost like a type of free re-spin. This can repeat over the same spin multiple times for multiple wins. You can end up with a maximum of six rows with this collapsing feature.

The bonus symbol can show up with as many as five on the reels at once. Three or more will give you a Lucky Wagon Spins bonus round. The number of bonus symbols on the board determines the settings for the feature. Specifically, three, four or five bonus symbols will give you these spins with two, three or four horizontal rows open.

The highest row on the game board gives you feature enhancers. You can pick up different values for the coins worth up to 100x with these enhancers. You can also get multipliers and other goodies that give you more ways to win by adding rows, which is in addition to other add-on features.

You can have a wild xBomb symbol show up. It will substitute for anything on the game board other than the bonus symbols for the Lucky Wagon feature.

Whether this wild is used as a part of a combination or not, it explodes. This causes the surrounding symbols to be destroyed as well, not including the scattered bonus symbols. The multiplier for the next collapse also increases by a factor of one.

This bomb explodes with any win, but it doesn’t have to be a part of that win.

If you get three to five of the same symbols lined up horizontally without a win, you trigger this feature. Those symbols will be removed from the game board. In their place, you’ll get wilds based on how many symbols were used. Three, four or five symbols will yield one, two or three wilds, respectively.

All other symbols explode to offer a fresh set of chances to win like a new collapse does.

How to Win at Fire in the Hole

The volatility of the Fire in the Hole online slot being so low makes adjusting really straightforward. Picking a bet size in the range of 33 to 50 percent higher than what you’re used to is a good way to do this. The idea is that you don’t have to worry that much about increased swings because of the low-level volatility. However, your wins will be proportionately higher.

Payout Structure for Fire in the Hole

On the lower end of things, the card rank symbols K, Q, J, 10 and 9 are available. They award payouts ranging from 1.5x to 1x. Note that you need at least three of a kind to trigger any of these wins.

The gameplay experience of the Fire in the Hole video slot is extremely action-focused with a serious number of opportunities to hit serious payouts. Compared to other titles that use related driving ideas, this slot differentiates itself in a number of ways instead of only being like everything else, and the hit-rate of the range of features in this title is serious enough that you will definitely not get bored.

As part of this company’s portfolio overall, this is a title that fills an important position since it has appeal to a lot of players. As if that wasn’t enough, the presentation and visual tone of this video slot offers an aesthetically pleasing look that’s competitive with some of the best that the online casino industry as a whole has going on.

Which online casinos have Fire in the Hole?

Fire in the Hole Video