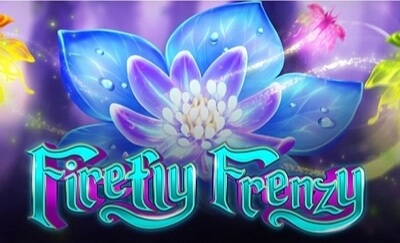 The Firefly Frenzy video slot produced by Play’n GO has a forest fantasy setting with absolutely gorgeous graphics. The Frenzy Spins feature gives players opportunities for bigger payouts, and the wild multipliers in the free spins and regular game modes can multiply your winnings by up to 243 times their normal size. Learn how to win in this review and also compare online casinos with the Firefly Frenzy slot.

One of the ways that Play’n GO will build some of their titles is to start with a gameplay concept and then form a theme around that piece of the experience. Because they have such high-quality graphics in their slots, this works out really well most of the time.

This is the case with their Firefly Frenzy video slot; the game is built around a wild multiplier concept, and a forest fantasy theme was “wrapped” around it to flesh out the rest of the title.

The juxtaposition of this theme and gameplay focus creates an interesting sight where the theme and motif of the title gives players a relaxing experience, but the features drive a more action-oriented feel. Putting these together gives players a sense of moving along with exciting play without getting overwhelmed.

The layout for this title is pretty straightforward but is set up in a way that also complements the feature set at the same time.

We recommend players pick out their bet size based on something in the medium range of what they’re comfortable with. This will keep the swings from being out of hand since the volatility isn’t super serious, but it’ll still give you chances to take down some really impressive prizes thanks to the way the features work, which you’ll see down below.

The features are what drive the action for the Firefly Frenzy online slot. In what follows, we’ll look at the game’s features in order of importance and show how they have “overlap” in the sense that they all affect each other and bring out even more value than they would individually without being connected in this way.

Note: All of the wins we’ll discuss here are based on bet sizes of €1.20 per turn. You’ll need to increase or decrease the prizes proportionately based on how much you bet.

The most important symbol in terms of how often you’ll see it and what forms the base of the rest of the features is the green firefly symbol. It’s a wild and substitutes for everything but the scatter symbol. It also has some pretty good payouts:

What you’re going to see is that all of the features are connected, and the wild symbol is no exception.

The green firefly described above is not the only wild firefly on the game’s reels. You can also get orange or purple fireflies as well.

The orange firefly is worth 2x, and the purple wilds are worth 3x.

The purple and orange fireflies in the Firefly Frenzy online slot are wild multipliers. When you get them in a winning combination, all of the wild multipliers on that payline will multiply by each other and by the value of the win on that combination to give you massive prizes.

Where these symbols really shine is when they’re a part of a combination of wilds and multiply against that payout. The 36x win mentioned above can quickly become several times that, which is impressive as well since it’s the largest regular payout in the game to begin with.

There’s a different type of scatter symbol in the form of the moon that can show up behind any of the regular 20 symbols. If you get a firefly on that spot over the moon on any given spin, then you’ll be granted a set of Frenzy Spins. This is a set of free spins that give you escalating multipliers.

The way this works is that the best multiplier you earn is what you’ll keep for all wins on subsequent spins. You re-trigger the feature every time you add more multipliers to the total by getting those wild multiplier fireflies on the game board.

There’s a cap of 10,000x for the multiplier, which basically means there’s no real maximum at all. This is very impressive and could very well be the highest win multiplier ever released in a video slot.

How to Win at Firefly Frenzy

To maximize your chances of winning at this game, what you have to do is stay consistent. You want to pick a bet size that will make you comfortable enough to play long enough to eventually get into the Frenzy Spins feature because this is where a lot of value is for the title.

Along these lines, we suggest players stick with mid-level bet sizes in the center of the range of what they’re comfortable with. This will also help to give you bigger payouts whenever you get multiplier wilds during the regular game mode.

At the bottom end of the pay table are four gem-based symbols in the shapes of the four card suits. The spade and heart can each earn you 3.6x for five on a payline. Five of the club or diamond will pay out 1.8x, which is pretty reasonable considering the bet sizes used to get those wins.

With the Firefly Frenzy slot by Play’n GO, you’re getting an experience that almost completely centers around a set of multipliers. However, those multipliers can get pretty huge, especially in the Frenzy Spins bonus feature.

The visual appeal and aesthetics for this game are really strong, and it’s the kind of thing that’s relaxing enough for you to look at it for long sessions and not have your eyes get so tired, but the gameplay is exciting and action-oriented enough that it’s not the kind of game that most players will get bored with quickly.