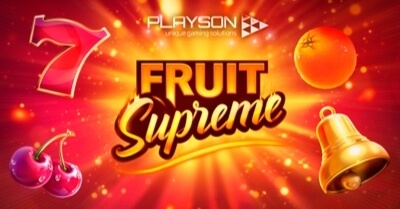 The Fruit Supreme online slot by Playson bends the classic and video sub-genres of the online slots industry and gives players an experience with a high hit-rate and tons of action on the regular pay table as the centerpiece.

However, the Fruit Supreme online slot by Playson is different. It bends these two sub-genres to create a different type of experience for players.

When you first start to play this game, you’ll notice that it’s based on a fruit machine motif, and that’s something that you’d typically see from three-reel classic slots. However, the graphics are of a particularly high quality, as is the soundtrack, and these are things that you would normally only see in five-reel video slots. It’s clear that they have melded the two genres together in terms of the presentation of the title.

Moreover, the gameplay is bent in the same way. Classic slots are known for not having a lot of action, but the Fruit Supreme slot has plenty of it with a high hit-rate and a low volatility. At the same time, video slots are often known for having a lot of bonus rounds that rarely hit but that take up a lot of value. You don’t have to worry about that type of thing in this slot either.

The first look at this game gives a pretty good idea of what the format is all about. Here’s what you can expect:

While the format is unusual, it’s pretty intuitive to understand, and it’s made less complicated by making the payouts a direct multiple of how much you’re betting total. This removes any misconceptions or mistakes that can come from trying to do the math in your head.

A Note on Play Style

Something you have to understand about the Fruit Supreme slot is that it’s geared completely around the regular pay table. This is a part of how they brought together the two types of sub-genres in one game.

The pay table is structured so that the hit-rate of this title is particularly high, meaning that you’re going to have some sort of win on a higher percentage of spins than you typically would on other titles. It’s something that makes this game stand out in a big way, and it’s really the major selling point in terms of its overall gameplay style.

The bottom line is that the play style here is different than what you normally see, and that can be a good thing or a bad thing just depending on your own personal preferences.

It’s critical to note again that these wins are multiplied by the entire bet size. Do not let the numbers used trick you because a 160x win in this game would be the same as a 4,000x payout for a game that based their wins on line bet wagers.

This symbol is a critical part of the overall payout structure because of the large payouts it gives despite only needing two or three symbols to win.

Something Playson did in this game that’s pretty cool is that they kept all of the fruit symbols at the same payout level. All four of these symbols look great, and they pay 4x for four of a kind or 1x for three of a kind. Since you can get multiple wins on the same spin pretty easily with 25 paylines shoved into a 4×3 layout, these prizes are better than they seem.

Finally, we have the X symbol. Four of the X earns 2x, and three of a kind gets you a 0.6x win. This might seem like a small set of payouts, but the X symbol is based on the blank symbols that would come up in older style classic slots that wouldn’t pay anything. They’ve actually done players a big favor by including payouts for this symbol, and it’s a smart way of incorporating the concept.

How to Win at Fruit Supreme

The main strategic options you have in this game are how long your sessions are and what your bet size happens to be. We think that this is a great game for changing up your bet sizes based on if you’re hitting a winning streak or not, but there’s another approach you can use based on the fact that the hit-rate is so high.

If you use higher bet sizes than usual with smaller sessions, you won’t have to worry so much about the swings getting out of hand, but you’ll wager the same amount as you normally would through the course of your session. The advantage is that it gives you better opportunities for even bigger wins from the upper-tier symbols.

Playson’s Fruit Supreme video slot combines the best of the video slot and classic slot worlds into one package that looks amazing and that has extremely exciting gameplay. If you aren’t too hung up over the lack of bells and whistles and instead prefer substance over flash, then this is a game that you’ll likely be drawn to.