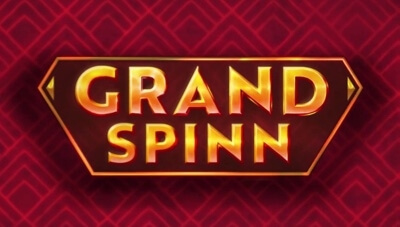 NetEnt is known for their video slots, but the Grand Spinn online slot uses an older, classic style and centers around high-action gameplay that offers lots of ways to win some pretty large payouts. This classic slot does not play like older three-reel titles, and it stands out as being a serious attempt by Net Entertainment at a three-reel, action-oriented game.

If you’ve played in the online slot world for very long, you quickly come to learn that video slots dominate everything. Most providers don’t even come out with many new three-reel games simply because the format has been thought to be exhausted with no room for new ideas.

Net Entertainment challenged this idea with their Grand Spinn classic slot with some very serious results.

The theme of this game has some classic influence, but the gold and burgundy design looks excellent and is a great example of how NetEnt can make a game look amazing no matter what the theme or concept is. While this game is conceptually very simple, since it’s all about trying to win big payouts and nothing else, the way they have handled the minor throwbacks to an older era are impressive but subtle.

As this is a classic-style title, its format is a little different than what many players will be used to. However, once you get past that, you’ll see how flexible the betting is and how much action the game provides in spite of what some would see as a more limited piece of virtual real estate.

There’s no doubt that this game is designed in a way that gives room for players at all levels of stakes to get in on the action, and you can really see that with how overly wide the betting range is.

You’ll also notice that a lot of the symbols play into the format itself, but it’s not done in an overwhelming way that overshadows the rest of what the Grand Spinn online slot has to offer.

The last thing a lot of slot fans would think about with a three-reel, one-payline game is that it has a lot of features. However, this game is an example of how Net Entertainment has used their creativity to break the mold.

In what follows, you’ll see types of features that you most likely haven’t seen before. You may have seen similar in some titles, but it’s virtually certain that you’ll have never seen these ideas used in the ways they are used in this slot.

The first thing you’ll probably notice is that there’s a 2x wild symbol that can appear on each of the three reels. Three of a kind of this symbol is worth a 20x payout in theory, but it really becomes 160x as you’ll see below. However, they also help you to get multipliers on your wins.

If you get one of these symbols on the payline in a win, it will give you double the size of the normal prize. You can also pick up two of them for 4x the normal payout. Three of a kind awards 8x the usual win, and that may seem counter-intuitive, but what you’ll find is that there are other ways to win that these multipliers can apply to that we’re going to get into below, particularly with the nudge feature.

The wild substitutes for everything but the jackpot symbols and the up arrow symbols.

If you get a winning combination on the payline, then you’ll activate the nudge feature. The way this works is that the symbols on the top row above the payline can roll down to substitute in to give you more wins for the same combination.

The symbols in this game frequently show up as stacked, and that’s why this feature can provide such a great value.

The reel will continue to nudge down a spot for each additional symbol that fits, and this will happen across all three of the reels where a matching symbol appears above the payline. However, things can heat up even more if there is an upward arrow at the top of the stack of symbols.

When this happens, it kicks the reel back down to the bottom of the given stack of symbols, which makes the wins count all the way through again for a whole lot of extra wins.

At the top of the reels, players will see three static jackpots. They are listed as follows:

The Mega Jackpot is the largest win available in the game. However, winning any of them is a little complicated because there are multiple ways to win.

First off, you can get three jackpot symbols on the middle row. There are symbols for each of the three jackpots, so what happens is that the symbol for the lowest jackpot on the list of three is the one that you are awarded.

However, if you end up with a winning combination, and on the top row of symbols, you end up with all three jackpot symbols across (as a part of the natural spin or through the nudge feature), then you’ll be rewarded a jackpot in a similar way.

We feel the need to point out that the Grand Spinn jackpot slot is the first game we’ve ever see use this type of mechanic to decide between a few different jackpots, and that just goes to show how NetEnt can innovate on several levels at once.

How to Win at Grand Spinn

The key to the Grand Spinn online slot is going to be to pick a level of stakes that you’re comfortable with because of the big swings that come with such a high volatility and to stick to it while chasing the big jackpots and multi-payouts that come from the nudge feature and wild symbols.

These are where the largest wins in the game are generated, and you’ll want to wait out any losing streaks so that you can fully take advantage of what these parts of the game have to offer.

The remainder of the payout structure is really straightforward. The symbol with the sevens pays 20x for three, and you can get 10x for three watermelons or 5x for three of the oranges. The plums and cherries pay 3x and 2x, respectively, and the bottom win is for the bar symbol with 1x for three.

Keep in mind that you’re very frequently getting paid for these wins several times over between the wild multipliers and the nudge feature, so don’t let the fact that they are relatively small mislead you.

A lot of players may have reservations about playing a title with just one payline and three reels, but here are some things to look forward to in the Grand Spinn slot online:

The great things about this game aside, some players may be turned off for the following reasons:

All-in-all, we think that this can be a very fun alternative to video slots for players who are action-oriented or who care more about gameplay than the flash and visual appeal of a game.