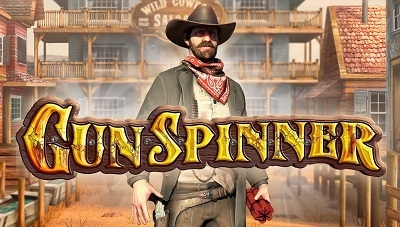 The Gunspinner online slot is based on a Western theme and is all about a character who stands off to the side of the reels in tremendous 3-D graphics. You can pick up free spins, wild features and special bonus reels that only pull from top-level symbols during the regular game and free spin feature alike.

We really like what Booming Games did from a visual standpoint with the Gunspinner online slot, but their expertise really came into effect with the gameplay. This title has features that we haven’t ever seen before, and that’s not all.

If you like titles with a great combination of aesthetics and gameplay, then you’ll have a hard time going wrong with this game.

This developer is known for making great-looking titles. They’ve done it for years, and it’s no surprise when they put together a slot that looks amazing. However, the Gunspinner video slot exceeds expectations on this even beyond what their reputation has earned them.

They didn’t leave out strong gameplay in the process. The feature set of this game is tremendous, and the hit-rate is high as well. Having just seven regular-paying symbols on the game board will do that, and it all comes together to give players a lot of action on every spin.

The format for this slot is straightforward and easy to understand without having to get too far outside of the box. Here’s what to expect:

The volatility for this slot is pretty low. It’s not the lowest in the industry by far, but it’s well below average, and a big part of that is the fact that the hit-rate is a bit on the high side. What this basically means is that you’ll get a lot more small and medium wins than average in this title, but that’s at the expense of losing a little bit of a chance of winning bigger pays.

The feature set for the Gunspinner video slot is a bit different than what most players may be used to. However, they mix some new features with some common ones so that players won’t be too far outside of their comfort zones while playing.

The man standing to the left of the reels is the main character, and he can help you to get better chances to win with the random bonus reel feature.

You can activate this feature at random, and when you do, he will light a bundle of dynamite and throw it at the middle reel.

When this happens, a special explosion frame will go up around the middle reel, and it will change so that only four symbols can appear on it:

What’s clear is that this will help you to get better payouts on average even though it can cut you off from some of the possibilities for smaller wins by forcing the gold bar and scatter onto that middle reel.

Even with that minor drawback, however, you’ll get more value with this feature activated than you will from it not being turned out. That’s because the value of these four symbols are higher than the rest since they’re the four best paying symbols, on average, in the game.

In the free spins mode, you can still get this feature, but the symbols available change a little bit for an upgrade.

The scatters appear on the first, middle and last reels only during the base game. When three of them show up at once, you can pick up 10 free spins. There are a few things that make these free spins worth more than their normal counterparts.

First off, the symbol set for the bonus reels feature is different. The regular wild is replaced with a double scatter that counts as two positions, so it helps you to re-trigger the free spins feature a lot easier. Note that the wild with the 2x multiplier is still available.

During the free spins mode, any wild symbol that appears on the first two reels or the last two reels will stay in place for the remainder of the feature as well. This sticky wilds feature adds a lot of value, especially when you re-trigger more free spins because they will accumulate and give you much easier opportunities to hit big wins as well as multiple small and medium wins at the same time.

The wanted poster of the man on the left of the reels is the wild symbol in this game. He gives the following winning combinations:

Note that these wins, much like all of the wins that we will describe down below, are all based on multiples of the entire bet size.

You can also pick up a 2x wild. If at least one of these is in a winning combination, it will double the value of that combination’s payout.

How to Win at Gunspinner

The hit-rate of this game is above average, and the volatility is below average. The natural adjustment is to increase your bet size slightly to take advantage of getting bigger payouts while the swings stay at a reasonable level.

However, you’ll be fine if you decide to play with your more typical bet sizing as well, especially if you play in a way that gets you more spins in during your session than you’d typically get.

The gold bar is the top-paying regular symbol with 25x for five of a kind. However, you can get a double golden bar that allows for up to six of a kind combinations of this particular symbol that are worth 37.5x instead.

The bag of gold coins gets players a 17.5x payout for five of a kind combinations, and the pistols are worth 15x for the same. To end off the high-paying symbols, you’ll earn 12.5x for five of the bottles of whiskey.

There are three lower-tier symbols as well, and they come in the form of playing cards. Five of a kind of the A, K or Q symbols will pay you 5x, 3.75x or 3x, respectively.

With the Gunspinner video slot, we get a good look at what makes Booming Games’ titles so strong overall. They combined some excellent visuals with a style of gameplay that will appeal to a large percentage of players.

The features are really solid as well. We like the bonus reel concept and the idea of being able to get six of a kind with the double golden bar symbol. The way this bonus reel is upgraded during the free spins mode brings it all together and gives it a very cohesive feel as well.