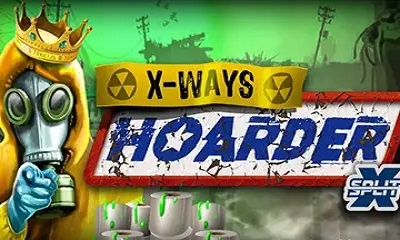 The Hoarder online slot from Nolimit City takes players into a nuclear wasteland. This post-apocalyptic title brings lots of interesting characters into the fold. What’s more is that it looks tremendous and has a great depth of features with lots of ways to get paid.

An Introduction to Hoarder

Lots of popular video games these days are based on the idea of a nuclear fallout. After the Cold War and the threat of mutual destruction via nuclear weapons, it’s been a popular theme in fiction in general. The Hoarder video slot takes this to the next level and includes lots of fun characters in the process.

If you like games that have a lot of interesting faces, then this is a title to check out.

The gameplay is what will really keep players interested in the long term here. You get a lot of ways to win from the regular pay table. However, what stands out the most is the varied feature set. There are features here that you don’t just see all the time, and that’s something we really enjoy. As a result, you end up with a fairly atypical feel from a gameplay perspective.

The visual appeal and presentation of this slot are also outstanding. Aside from the various characters we mentioned above, the other symbols and background are also very noteworthy. Everything looks like a lot of attention was put into points of detail. That’s always something that we’re going to be a fan of, and the end product was Nolimit City creating a slot title that looks absolutely tremendous. We’d even put it up there with some of the best the industry has to offer in terms of presentation.

The format and betting setup for this title are both easy to jump in with. You’ll get used to both within just a couple of wins, and we love seeing that level of familiarity. Here’s what to expect:

The volatility of this title is pretty reasonable. It comes into the medium range. That means your swings will be there to some degree, but they won’t be overpowering. This is well within a range that will appeal to most players most of the time.

The feature set for the Hoarder online slot gives you some interesting ways to get paid. We like that they are a bit off of the “beaten path” in terms of offering something different. With that said, they’re not so far outside of the box that they are alienating to players. In any case, here we’ll break down what you need to know about the features here.

The xWays symbol is a pretty important part of the regular game mode. On the second, third and fourth symbols, you can get xWays symbols that count for two, three or four positions. Each xWays symbol will then turn into a randomly chosen matching symbol. This gives players an easier time to get winning combinations since you’ll have more matching symbols on the game board, but it also makes it easier to hit several combinations on the grid at once because they can count for multiple symbol spaces.

This is a cool way to expand on the “all ways” format concept without simply increasing the grid size. The originality involved in this type of feature is something that we think all providers could learn from.

In the regular game mode, you’ll have xSplit wild symbols that appear on the third, fourth and fifth reels only. When one of these lands, every symbol horizontally to the left is split in half to cover two spaces. This affects the number of ways to win. What’s more is that they can be split multiple times from multiple xSplit wilds. If this happens, a number will be put on the symbol so that it doesn’t get split so much that it’s difficult to see.

What’s cool is that different numbers of these symbols appear on different reels. For example, the third reel has one of them, but the fourth has two. Finally, the fifth reel has three. On the fourth and fifth reels, they always appear stacked. That makes it much easier for a significant portion of the board to increase in size.

After landing and splitting the game board, these xSplit symbols turn into regular wilds. Subsequently, they can be split further by other xSplit wilds for even more ways to win.

Scatters show up on every reel but the first. If it’s hit by an xSplit wild, it will not split. Instead, it will be converted into a super scatter symbol that glows green. We can see the theme of the Hoarder video slot being taken into account here in a very smart way.

You’ll get seven free spins for three scatters. However, if you trigger this feature with four scatters, then you’ll have ten free spins instead.

The xWays symbol is sticky during this game mode. What’s more is that all scatters immediately become Super Scatters regardless of whether they are hit by xSplit wilds. xWays symbols add one free spins to the game board, and they’re used for a leveling system.

For every three xWays symbols that appear, you’ll move up through Hoarder levels. There are three available levels, and they each take away one of the lowest-paying symbols. This makes it more likely that you get wins in general. However, when you get them, they’ll also be worth bigger wins on average.

How to Win at Hoarder

The volatility of this game is firmly in the medium of the range. It’s completely average in that regard. This means that you don’t have to make any kind of betting adjustments. Instead, all you need to do is pick a bet size you’re comfortable with and go from there. The swings won’t be bad enough for you to need to worry about them. However, there will be enough volatility that you have chances to win big payouts from the features.

There are five characters on the game board. They have distinct color themes, and we’ll note them by color. The yellow skeleton character pays 5x for five of a kind. Likewise, the man in the orange mask gets you 3.75x, and the woman in green is worth 2.5x for five. From there, the men in blue or gray pay 2x or 1.5x, respectively.

Five minor symbols are found on the game board as well. They are different items like toilet paper, a first aid kit and so on. These offer payouts ranging from 1.25x down to 1x for five of a kind combinations.

A variety of extra features are used in the Hoarder online slot, which is a fact you can’t necessarily say for much of the casino industry as a whole. On top of that, when compared to other online slots that utilize similar driving concepts, this slot stands out in a few ways compared to only being one in the same.

The presentation of this slot is exceptional and enhances the overall play style, and because this game brings a high level of quality while still standing out as an individual game, this slot fits tremendously in this software company’s portfolio as a whole. As if that wasn’t enough, the gameplay experience in this video slot gives a tremendous amount of fun.

Which online casinos have Hoarder?

Use the list of Hoarder casinos to see all online casinos that have Hoarder.