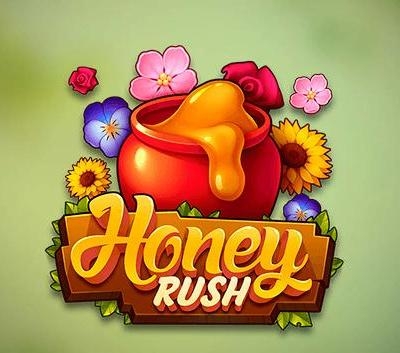 Play’n GO’s Honey Rush online slot brings players an atypical, cluster-based way of winning with connected symbols on a randomized honeycomb pattern that lends itself to an action-oriented style of play. With sticky wilds and the exciting Rush Meter feature, players will have a plethora of ways to add some sweet gold to their bankrolls.

An Introduction to Honey Rush

When you have an online slot with an atypical play style, that’s something that can leave a bad taste in your mouth if it’s too far outside of the box or doesn’t bring an overall high-quality experience. This is because some developers will throw out a non-standard format with poor gameplay and expect players fawn over it.

Play’n GO knows better than this, and that’s why their Honey Rush video slot brings such great graphics and exciting gameplay within a format that isn’t your usual.

While the layout of the title isn’t the usual rectangular grid, it does fit in perfectly to the theme of the game itself while providing a tremendous amount of action and ways to win. This is definitely a solid pick if you want to try something a bit off of the beaten path with the understanding that the flow of the game is very similar to more regular video slots.

We want to point out as well that this title has a volatility that’s on the lower end of the medium range. Everything is really set up here to give you a fairly high hit-rate for a game that’s based on cluster matching, and the volatility is evened out even more by the way the features work.

A number of features come together in the Honey Rush online slot to give a lot of action and plenty of ways to get paid. The hexagon format is used to full effect with these features as well, and that’s what largely informs the majority of the gameplay.

The first feature we’ll look at is the one that you’ll run into the most often in the Honey Rush video slot. Whenever you pick up any win, you’ll have the Falling Cluster feature activate.

Winning symbols of a cluster will disappear after they pay out, which allows new symbols to fall from above to give you chances to hit more winning clusters.

More wins mean more disappearing symbols, and this process can continue repeatedly until there is a time with no cluster wins available on the game board. That’s when the turn actually ends and the feature is over.

The red pots of honey are wild in this game. Because of the way the format is set up, they don’t get (or need) their own winning combinations. However, they do give you something even better.

Wild multipliers of 2x or 3x can appear on the game board at any time during your spins.

What’s really great is that you can have multipliers combine to be a part of the same winning combination, and you’ll be able to pick up total multipliers worth as much as 27x all at once to really drive that point home. This is where the biggest wins in the game can come from in the general sense, but these wilds cooperate with the other features to provide even more sources of value.

If you get a sticky wild, then it won’t disappear when it’s a part of a winning combination. Instead, it’ll shift a spot on the game board to allow new symbols to fall into place where it was previously, and this helps it to be parts of new wins on the same turn.

The sticky wilds really provide a lot of value since they can also be wild multipliers, and that gives some tremendous opportunities for amassing some serious pays across the Falling Cluster Wins feature.

The Rush Meter sits beside of the game board and charges as you hit winning clusters. It goes through four different levels and gives you some opportunities to pick up a variety of features. This includes extra sticky wilds and different colonies from the following feature set noted below.

This Rush Meter is distinct for each bet size and does not carry over when you switch from one bet size to another, which is important to note.

We also think players should consider that this feature rewards those who stick with the same game for a prolonged period of time.

There are three colony symbols that work based around the central symbol that’s outlined in a golden hexagon in the middle, which also makes it easier to see where everything is in this title from a visual standpoint.

At random, you can trigger the Colony Feature, which will clone the central symbol into a number of patterns. The Queen Colony is only triggered with the Rush Meter when you max it out, and it will cover the entire game board to give you an absolutely massive payout.

The Drone and Worker Colonies will give smaller clusters that are still worth some pretty solid wins.

How to Win at Honey Rush

Getting the most from the Honey Rush slot is all about finding a bet size that you’re comfortable with and sticking to it over longer sessions. This is because the Rush Meter will built toward the Queen Colony over and over, which is a guaranteed massive payout that is a substantial amount of value.

The best way to maximize your RTP percentage in this title is to make sure that you always get the Queen Colony before you switch bet sizes, even if that means using a size that’s a bit smaller than what you would otherwise prefer in games with a comparable volatility.

Eight symbols make up the main pay table across two sets of symbols. The lower four make up the bottom tier and are all different types of flowers.

Moving up, you’ll have a diamond and three types of coins. The diamond gives a big 200x win for 35+, which is important because it can be multiplied several times over with the wild multipliers. From there, the golden coin is worth 100x for 35 or more, and you can pick up 75x or 50x for 35+ of the silver or copper coins, respectively, as well.

With the Honey Rush slot by Play’n GO, you get a chance to add some real honey to your account balance while playing on a unique format that’s a lot of fun. The features come together with this atypical layout to give players tons of ways to get paid with massive multipliers, sticky wins, clusters that fall into place to help you get paid over and over along with a strong overall pay table.