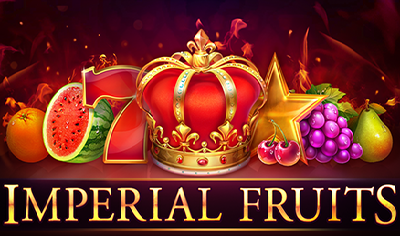 The Imperial Fruits video slot by Playson is a game that combines the look and aesthetic of classic titles with the gameplay and layout of modern slots to give players a fun experience that consists of a meshed up version of these two sub-genres. It’s an action-oriented game with a ton of value coming straight from the regular pay table and features that accentuate those payouts.

An Introduction to Imperial Fruits

Playson has such a high level of popularity as an online slot developer because they focus on providing a wide range of different themes and styles of gameplay. This enables them to reach all types of players with their portfolio as a whole.

The Imperial Fruits online slot is a good example of a game that functions well as a part of this overall portfolio.

This is because it uses a throwback style of theme based on classic titles that is set in a modern video slot environment. What’s more is that the visuals are of an exceptional quality to the point that we started really wanting some fruit while putting together this review because of how great the fruit symbols look.

They’ve also not forgotten about gameplay here, and they’ve added some solid ways to get paid without getting too far away from the roots of the classic games while still being definitively a video slot.

The layout here is all video slot, and the betting is designed to be really simple and easy to use. Here’s what to expect from this game:

Five lines might seem like a low number, but this is actually tied into how the features work, so be sure not to make the mistake of dismissing this game out of hand because of this one aspect of it. Playson was pretty clever with how they made the theme of the game mix in with the format and feature set, and you’ll see how all of this comes together in the following.

The style of gameplay for the Imperial Fruits video slot is all about getting a ton of value from the pay table. This comes from a smart combination of features and how those features interact with the basic format of the game.

There’s a king’s crown that can appear on the second, third and fourth reels for this game. This is a wild symbol, and it will substitute for anything other than the scatter symbols to help you get better payouts than you would have received otherwise.

With that said, this wild also has an extra feature: It will expand to cover the entire reel if doing so will give you more extra wins.

If it does expand, any scatters that it covers will still be counted towards your total, so you don’t have to worry about losing out on scatter pays because of this expanding wild symbol feature. Additionally, this helps to give you more wins and opportunities for multi-line wins than you would have had otherwise, which increases the hit-rate, lowers the volatility and gives you better payouts on average than what you would have received otherwise.

In fact, some of the best payouts available in this game come from getting more than one wild on the screen at the same time because then you only have to get three more symbols to match for the great-paying five of a kind combinations.

The top jackpot in this game is had by the lucky sevens symbol. It offers wins for as few as two symbols on a payline as well, which combines with the expanding wild on the second reel to give some serious opportunities for multiple wins on the same turn. The lucky red seven gives the following payline-based wins:

It is possible to get more than one of these pays at the same time, especially with the expanding wilds feature in play.

The first scatter we’ll look at is the golden star. It appears on each of the five reels, and it gives scatter wins along the following lines:

These scatter wins are paid separately from the bet line wins, so you can have the wilds cover the spot that the scatters are on to get two winning combinations (one scatter, one line-based) from the same spot on the game board.

It’s also worth noting that these scatters can show up on any reels and in any positions to give you winning combinations.

The diamond scatter is a little more simple than the golden one. It shows up on the first, third and fifth reels only. If you get all three on the game board at the same time, then you are given a 100x win. That’s all there is to this symbol, and it essentially just gives you another opportunity for a really solid mid-level payout.

How to Win at Imperial Fruits

With the Imperial Fruits video slot, you’re dealing with a title with only five paylines but a lot of value tied up in scatters and expanding wilds. As a result, you end up with a very low volatility and a pretty reasonable hit-rate considering the fact that there are so few lines to win on.

With a volatility level that’s so much on the lower end of the range that you typically see, you can really increase your bet size by quite a bit and keep the swings within a pretty normal range. This increases the value from the features a lot at the same time and can be paired with playing shorter sessions than usual since you don’t need longer sessions to smooth out volatility from features like bonus rounds that are typically harder to get.

The Imperial Fruits online slot pay table has the lucky red seven at the top with a pair of scatters. From there, it’s all fruit symbols.

What you see from the structure of this pay table is that there are a lot of wins at the medium and lower end, which contribute to the low volatility, but you also have chances for a sizable jackpot with the lucky red seven symbols.

We really like how Playson put together the Imperial Fruits slot to take the best from the classic and video slot worlds. Visually, this is a game that’s up there with the best that you’ll find in the online slot industry as well, and it’s clear that it was not just quickly slapped together in order to put out another game to their portfolio, which is unfortunately what we often see with these throwback-style games with other providers.

Which online casinos have Imperial Fruits?