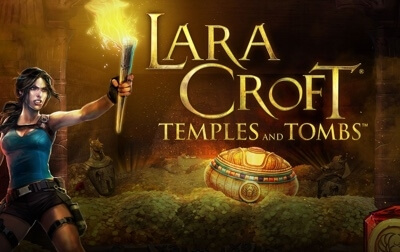 Marking the third instalment of the Lara Croft franchise, Microgaming’s Lara Croft: Temples and Tombs promises a treasure trove of action adventure. The leading software provider has teamed up with Triple Edge Studios to produce a video slot that combines beautiful animation with a wealth of enticing features. With Rolling Reels, Multipliers, Jackpots and Free Spins all on offer, players have plenty of excitement to look forward to. The following Lara Croft: Temples and Tombs review uncovers the game’s hidden gems and offers a selection of online casinos where punters can join the computer world’s most famous heroine in her quest for fortune.

Microgaming’s newest release coincides with the 15 year anniversary of their partnership with Square Enix. Having initially introduced Lara Croft to slots fans, as the first ever licensed branded game, all the way back in 2004, the collaborating duo launched a sequel in 2008 before reuniting once again to unleash the final part of the trilogy: Temples and Tombs.

The game showcases all the iconography expected from a tomb raiding tale, fusing ancient temple backdrops with familiar symbols on the reels. The lowest value of which include everything an adventurer needs, from water bottles to flaming torches, first aid kits and grappling rope. Gold encrusted statues offer a little more value, followed by images of Lara herself in various kick-ass scenarios, with her portrait providing the most financial reward. The Wild is represented by a flying beetle and the Scatter comes in the form of the illustrious Book of Secrets.

The team behind Temples and Tombs have opted for a proven mathematical model, utilising a standard 5-reel, 3-row layout with 243 ways to win. Players with a variety of budgets are catered to, with the betting range allowing wagers from €0.20 up to a decent cap of €200, which combined with the high volatility factor, makes the slot a suitable choice for high rollers. Naturally, punters can explore Lara’s world from any platform and operating system, as the game works perfectly well across desktop, tablet and mobile devices.

An abundance of features keeps the action rolling, as the high variance levels requires plenty of patience on the player’s part. The slot employs an interesting array to ensure fans remain entertained, which occur across both the base game and the enthralling bonus round. They are as follows:

Already seen in Microgaming’s 2016 Jungle Jim El Dorado, the Rolling Reels feature witnesses symbols cascading down onto the reels. For every successful spin, the winning symbols disappear and a new selection descends. Generally admired by the slots community, this set-up extends the playing time and offers more opportunity for prizes.

As an appendage to the Rolling Reels feature, the Multiplier Trail kicks off after every winning combination. The new cascading symbols are subject to a multiplier, which rises from two times the wager to three times, and eventually reaches the max of five times the bet.

Every time a Wild is landed, it is ‘deposited’ into the Jackpot fund. Three pots of gold are up for grabs: Minor, Major and Grand, which can reward lucky punters with 15, 100 and 5,000 times their bet respectively. The feature is triggered at random, although the more Wilds that are landed in a session, the greater the chance of unlocking a prize. Although this added bonus is an undoubted asset, a progressive jackpot would have endeared Temples and Tombs to even more slots fanatics and possibly propelled the game to the next level.

Securing three or more Scatters will whisk players away to an illuminated tomb with overflowing riches. Surprisingly, Wilds contribute to the bonus round trigger. An initial eight Free Spins are awarded, which can extend to 32, as every time three Scatters appear, the feature is re-activated. On top of that, the Multiplier Trail is given a healthy boost, beginning at three, and rising through six and nine to a maximum of 15 times the win. Every unsuccessful spin will re-set the counter. A mammoth 80 spins can be enjoyed in total, which can result in lofty conquests of over 7,000 times the wager.

Microgaming have succeeded in bringing their Tomb Raider franchise into the modern gambling world. The game’s graphic novel renderings are on point, the soundtrack is decent and the slot offers a rich wealth of features to ensure substantial variety and enjoyment. As mentioned, Temples and Tombs’ high variance rating requires a touch of patience, but once landed, that perseverance can certainly pay off in the Free Spins round, which together with the Jackpots, makes Lara Croft’s latest escapade an adventure worth playing.

Which online casinos have Lara Croft: Temples and Tombs?