Legacy of Dead Casinos and Review 2021 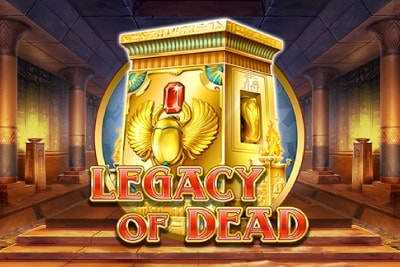 The Legacy of Dead video slot by Play’n GO brings a gameplay experience with a reasonable volatility but a high hit-rate. There are wild scatters, a free spins mode with a chance to get multiple expanding symbols and lots of ways to get easy payouts with two of a kind combinations.

Casinos with Legacy of Dead

An Introduction to Legacy of Dead

Within the online slot world, there are a few sub-genres that get a lot of entries in terms of new games that come out on a fairly regular basis. The Egyptian-themed sub-genre is one of those, and while the Legacy of Dead online slot fits into that grouping, the fact of the matter is that it’s a bit different than most.

Play’n GO has taken some serious steps to make sure that this game does not just seem like all of the others within the group of Egyptian online slots.

You can see this as soon as you take your first look at the game. It has a little bit of a different feel as you start out deep within a tomb with lots of treasure to be found where bodies have been mummified and left for the afterlife.

In terms of gameplay, it stands out tremendously with its feature-rich and high hit-rate style.

Betting is set up in a way to give you a lot of flexibility to get the exact bet size that will work best for you. Otherwise, it’s a pretty straightforward format, and here’s what you can expect:

The volatility is pretty reasonable, but it’s definitely up in the mid-level range. However, that’s a bit misleading in a sense because the hit-rate is really strong here with a lot of easy payouts in the small and medium range.

This is a particularly feature-oriented title, and that’s saying something considering how well-known Play’n GO is for making their games have a lot of features. In the Legacy of Dead online slot, however, you’ll see how the features really drive the play on one side while the regular pay table drives things on the other.

The wild symbols in this slot are an important part of the regular gameplay moreso than the average title. The reason for this is that you can get paid for them in two different ways.

This is because they pay out for line bet-based wins as well as for scatter-based wins, so you can actually get paid twice for the same set of symbols in this way.

The wild is the golden tomb with the scarab on it, and it gives the following scatter payouts multiplied by the total bet size:

Along these lines, you’ll also have regular line-based wins with the wild tomb symbol as follows:

There are two things to notice here. First, this wild pays for just two of a kind on a payline, which is the case for all of the top-level symbols in the Legacy of Dead video slot.

Second, your line bet-based wins always get paid the scatter payout as well. For example, five wilds on a payline will give you the 5,000x line-based win as well as the 200x win multiplied by your total bet size, which in and of itself is worth the equivalent of an additional 2,000x if it was listed as a payline win.

If you pick up at least three of the scattered wild symbols, you’ll also trigger a free spins bonus feature. This feature has a different feature than you normally see that helps to give you a lot of extra value.

A symbol is chosen at the beginning of the feature to be a special expanding symbol. After winning combinations are calculated normally, they will all expand to give you chances at even more wins.

Something else that’s really cool about this is that you can get multiple expanding symbols if you re-trigger the feature. Each time you get three or more scatters during the feature, it’ll add more free spins to your total and add yet another expanding symbol. You can actually do this over and over again until you have all nine paying symbols as scatters, as unlikely as that may be.

How to Win at Legacy of Dead

The first thing you should always make sure that you do when you sit down to play this game is to check that the number of paylines is set at 10. If it’s set at a lower number, then you’ll put yourself in a bad spot since your RTP percentage will be lower than it needs to be.

Otherwise, just use a bet size that’s within the realm of normal for you, and enjoy the high hit-rate and reasonable volatility that this title has to offer.

Payout Structure for Legacy of Dead

Aside from the wild symbol’s paylien-bsaed wins, there are four other top-tier symbols. The first is the pharaoh, who pays out 5,000x for five of a kind. The jackal gets you a 1,600x win for five on a payline as well. From there, there are 600x wins for the golden tomb and the bird with the red gem for five of either.

Something important to point out is that all four of these symbols, along with the wild, will give you wins for two of a kind or more, which means more opportunities for smaller wins to increase the hit-rate and keep the volatility down.

From there, there are five card rank symbols that are decorated to really fit the Egyptian theme. The red A and cyan K each give 120x for five of a kind. Five of a kind combinations of the purple Q, green J or blue 10 symbols each give you 80x wins as well.

Play’n GO knows how to go into an established sub-genre and really mix things up. That’s what they did with the Legacy of Dead online slot and the Egyptian sub-genre, and it shows that they can make a really solid game that stands out overall out of pretty much any theme.

The key to how well this game has been received is two-fold. First, it looks awesome without looking like it’s a straight-up “copy” of other games from a visual standpoint. Second, it has some really good features that center around the wild scatter to give a different type of gameplay than you normally get.

Despite the fact that this is a game that has a high hit-rate, there are still chances to win some really substantial prizes, and this is what balances things on both end of the pay schedule to create the reasonable volatility and dynamic gameplay experience.