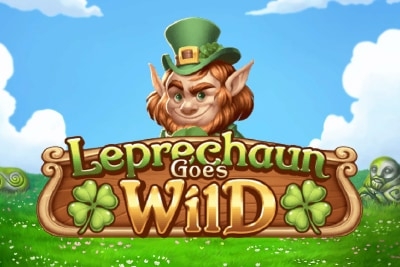 Play’n GO’s Leprechaun Goes Wild online slot centers around giving you sticky wilds that are available on every spin during a free spins bonus round along with giving you extra opportunities to pick up additional wild symbols during the regular game mode, both of which reflect the title of the slot.

An Introduction to Leprechaun Goes Wild

There is a lot of innovation that happens in the online slot world, and as a result, we often see that some of the more common features don’t really get much extra attention. Play’n GO has avoided this approach in their Leprechaun Goes Wild video slot by giving a focus to the wilds, which are one of the most common features that you’ll see in slots anywhere.

The idea behind this game is to give players a play style that centers around a lot of action that naturally comes from having the wilds be in the spotlight.

The whole visual approach to this game is solid with a great background scene and colorful symbols on the reels that look tremendous. Along with that, the play style is a lot of fun with plenty of action and a pay table that offers plenty of small and medium-sized wins without taking away your chances of hitting bigger prizes.

The layout of this game lends itself to a lot of action as well, and here is what you can expect overall:

In terms of volatility, this game is in the medium part of the overall range. That comes from a balanced pay table as a base, but the feature set packs a lot of value, so that drags the volatility up a bit to a higher level. With that having been said, the swings aren’t particularly bad in this slot at all, and that’s definitely not something that the vast majority of players will need to worry about.

The gameplay for this title centers largely around the wilds and scatters, which leads to a somewhat traditional experience for players who like seeing the basics focused on with special additions and ways of being handled instead of having them just be a part of the background noise.

The leprechaun symbol is wild, which you probably would have figured out based on the name of the Leprechaun Goes Wild online slot. He appears differently on each of the five reels, but they all count as the same symbol.

You can get some pretty solid wins with this character along the following lines:

Something worth mentioning is that these symbols do not substitute for the scattered shamrock symbols. Also, this slot calculates the best-paying win for each of the 20 paylines, so if you have a wild combination that would pay in a situation where you’d get a better payout if they were substituting for another symbol, then you’ll always be paid the best possible win instead.

The shamrocks are really special in this game because they do a few different things.

For one, they count as wilds and can fit parts of winning wild combinations while simultaneously helping you to avoid the “blocking effect” that scatters traditionally have in cutting off payline wins by taking up a space on the reels.

Two of a kind of this symbol, no matter where they appear on the game board, will give you a shot at the Luck of the Irish bonus. Three of a kind will give you a free spins mode instead, and that’s something that players can obviously get behind.

Luck of the Irish Bonus Feature

Two of the scattered shamrock symbols anywhere on the game board will trigger the Luck of the Irish bonus feature. You will be given one of two available features chosen at random.

The first feature gives extra wilds. In this feature, an extra wild is added to each reel in random positions to give you more ways to win before the wins are calculated. Don’t forget that the shamrocks themselves also act as wilds, so you’ll have a minimum of seven wild symbols on the reels to maximize your chances for payouts on that given spin.

The second feature adds an extra scatter to the reels randomly. You’ll have your wins calculated based on having that symbol act as a wild, and from there, you’ll have a free spins feature activated as usual.

When three shamrocks hit the reels in the Leprechaun Goes Wild online slot, players are given a chance to win a shamrock-style wheel with four options for the number of free spins you start with. You can get seven, nine, eleven or thirteen free spins to start the feature.

From there, you can pick up three scatters once again to spin a different wheel that offers three, five, seven or nine additional free spins. This can only be re-triggered once, and the shamrocks will only act as wilds for the remainder of the feature after that.

A key component of this free spins mode is that all wild leprechauns are sticky, and they will stay in place for the remainder of the free spins feature. What that means is that your latter spins are worth a lot more with chances for a ton of wilds to be available on the reels.

How to Win at Leprechaun Goes Wild

A key consideration about this game is how much value comes from the free spins feature, so you really want to maximize your chances of hitting it. However, with a medium volatility, you have to be careful that you don’t overdo it and expose yourself to too much in terms of swings.

One way to make this work for you is to get in more spins in your sessions at a slightly lower bet size than you’d typically make. The idea is that you’ll be betting the same amount overall, but this betting approach increases the chances of you hitting free spins.

Magical-looking card rank symbols with gorgeous vines growing around them round out the lower end of the pay table. The A, K, Q, J and 10 all pay 2x for five of a kind combinations.

There’s a lot to be excited about in the Leprechaun Goes Wild video slot. The free spins mode is pretty great with the sticky wilds, but the scatters counting as wilds as well during the main game adds a lot of value too without having to hit big features.