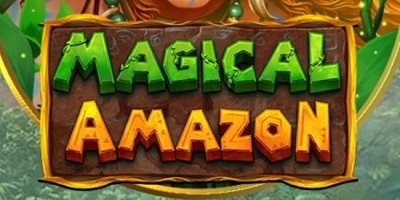 The Magical Amazon online slot from Spinomenal brings players into the depths of the Amazon jungle with a gameplay style that centers around chances for jumbo symbols to take up the entire middle three reels of the game to give players bonus feature opportunities and lots of extra chances to win big.

An Introduction to Magical Amazon

There is no shortage of online slots that use some type of jungle theme, so any entry into the sub-genre has to really deliver both from a graphical standpoint and from the gameplay end of things. Spinomenal was up to the task with the Magical Amazon video slot, and they have really brought it when it comes to both sides of this coin.

The graphics look great, but it’s the gameplay that will probably get the most attention from most players because it’s innovative while at the same time feels very familiar.

Generally speaking, we think that most players will find the graphics to be well above-average compared to other entries into this sub-genre. There are some nice-looking characters and animals on the reels with an animated Amazon background, and even the card rank symbols are visually appealing.

In terms of how this slot plays, you’ll be hard-pressed to find many games that have this much action without resorting to thousands of ways to win and overblown features that rarely hit.

The format for this title is set up in a way that it really leads to how the features and gameplay function, so it’s something to pay attention to instead of blowing off as irrelevant details. Here are the things you can expect:

The feature set for this title drives the volatility up a bit, so it’s firmly within the medium range. With that said, the hit-rate is higher than you would expect, and a lot of that is because there are 20 paylines that pay in both directions, so you get twice the number of small and medium wins.

The gameplay of the Magical Amazon online slot is all about the way the format has an atypical sizing with a difference between the outer two reels and the center three reels. This is the source of a lot of ways to win and chances to trigger bonus features.

The wild symbol shows up on every one of the five reels. It’ll give you the top regular payout in the game for five of a kind as well.

Payouts for this symbol are a little atypical. For five of a kind, you’re given 1,000x, which is the largest regular win on the pay table. However, it does not have special payouts for three or four of a kind, meaning that you’ll pick up whatever longer win could be made on those lines from left to right or right to left.

This is a different way of handling things, but it works well in this situation.

The free spins symbol can appear 3×3 in the middle of the game board. If it shows up completely with all parts of it showing, you’ll get a free spins mode where only massive symbols are shown across the middle three reels. This drastically increases your chances of hitting winning combinations.

On top of that, during the free spins, the wild symbol can appear 3×3 in the center reels, which will give you several guaranteed payouts every time it shows up in this way.

If you get the bonus wheel symbol to fully appear on the middle three reels in its 3×3 form, then you’ll activate a special bonus round.

During this round, you’ll get an instant win based on a multiple of the entire wager that you used on the triggering spin.

All of the regular paying symbols can show up at random in the middle three reels as a 3×3 colossus symbol. This makes it a lot easier to hit four- and five-of-a-kind winning combinations, so there’s an obvious amount of value there.

Once again, it’s worth noting that the wilds can only appear this way during the free spins mode.

Mystery symbols can appear on the reels as well. When they do, once the reels stop spinning, they will randomly be turned to a matching symbol. This can include everything except for the wilds, the bonus symbols or the free spins symbols.

This helps to give you more chances to win because it means more matching symbols on the game board.

It’s possible for the bonus and free spins symbols to give you a near-miss. This happens when they take up two rows but don’t quite make it all the way to the third row to activate the feature.

Sometimes when this happens, you have a chance for a nudge feature to happen that will kick the symbol one more row down so that it covers the reel and activates the given feature.

How to Win at Magical Amazon

The Magical Amazon video slot is all about riding things out and trying to hit the features. There’s nothing in particular you can do with your bet sizing here because of the medium volatility that doesn’t make increasing or decreasing your bet size advantageous compared to just playing normally.

The warrior woman and man are the two main symbols. It’s the redhead warrior woman that’s the best-paying regular symbol, and she yields 400x for five of a kind combinations. You can also score 250x for five of the man symbol wearing yellow/gold clothes.

At the mid level are two animals you could expect to see in the Amazon. First is a gorilla that pays 150x for five of a kind. Next, you can get 100x for five of the black panther on a given payline.

This balance out a bit once you get to the lower end of the pay table with the card rank symbols. The red A and teal K symbols both pay 50x for five of a kind. You can also score 30x for five of the purple Q or green J symbols.

With the Magical Amazon online slot, you get a feature-filled adventure centered around a theme that’s about the jungles around the largest river on the planet. Spinomenal did an excellent job with giving players a lot to look forward to with a whole lot of action in this slot.

If you’re the type of player who prefers a super low or super high volatility, then this game won’t be for you. Instead, it’s for players who like balanced chances for small, medium and large wins and who like having a bunch of bonus features that can trigger at any time and give you extra chances to hit wins at all levels of pay.