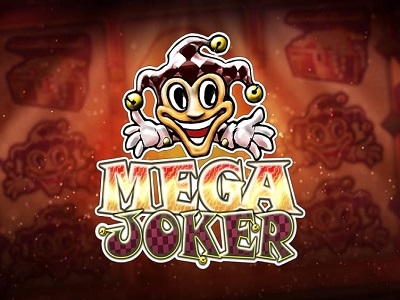 The Mega Joker progressive slot by Net Entertainment is one of the most important and most popular classic slots available in the modern online casino era. It offers a progressive jackpot that has paid up into the six figures as well as a fun gameplay style with two reel sets.

An Introduction to Mega Joker

There are certain tropes and ideas that are often unfairly applied to the classic slot genre. With the Mega Joker online slot, some of these become misconceptions that turn into assumptions about what this title must be like.

However, most of those assumptions are going to be wrong for most players.

Net Entertainment built this game in a way that it offers a tremendous amount of action in a situation where a lack of action is often a criticism of three-reel games. On top of that, it has an immersive style of play that centers around two different versions of the same game, and it requires that players think and plan ahead a little bit to get the most out of their sessions.

All of this is on top of the progressive jackpot that’s constantly sitting there waiting to be won, so it’s something worth getting into even if you tend to be more of a video slots type of fan.

Betting in this game is a little more complicated than what players may typically be used to. We’re going to explain how the base game works here, and then down below when we talk more about the gameplay and features, we’ll get more into how the second game works.

In any event, here’s what to expect:

The volatility of this game is pretty substantial. That comes down to two factors: the progressive jackpot and the fact that it uses a certain style of play based around two sets of reels that add more ways to get paid than usual.

The gameplay for the Mega Joker progressive online slot centers around two stages of play and two separate sets of reels. This is along with some other features like scatters and a sizable progressive, and all of it combines to give players a lot to pay attention to.

There are three primary buttons you need to know about. The spin button lets you play on the regular game mode, which is represented on the bottom set of reels. You’ll choose a bet size based on the three coin sizes shown to the bottom right and explained in the above.

For this game mode, payouts are displayed on the bottom-right side of the game board beside of the lower set of reels.

When you get a win, you’ll see the Supermeter in the middle of the screen fill up. This is like a secondary balance that’s only used for the upper set of reels. You’ll need at least 20 coins to wager there, but you can bet as much as 200 coins. There are four options that you’ll cycle through with the bet button. Alternatively, you can collect your Supermeter winnings back to your regular account balance by using the Collect button.

The thing to know and understand about this is that the upper set of reels gives the best payouts. While they do have the same five-payline format as the lower, the pay table is better, and you get opportunities to win with the joker symbol that you don’t get in the lower tier of the game.

The Joker payouts work a bit differently in some cases than you might expect, especially if you’re more familiar with video slots. In the Mega Joker classic slot, the regular game offers a win for three of a kind in jokers that you can see in the bottom right corner of the screen, but you may be confused that it lists the payout as “20-400.”

What this means is that you’re given a random payout in that range. You can win from 20x to 400x as a result of this win, but it’s chosen at random as to what your actual win is within that range.

You’ll see some other joker payouts up top. If you play on the top tier at all, you’ll get a 1,000x win for three of a kind in jokers. However, if you double the minimum wager from 20 to 40 coins, you’ll shift to the improved pay table for a win of 2,000x from the joker wins instead.

If you boost your payout to the 100-coin level, then you’ll get access to a different joker win. Since the jokers show up stacked, you can win a random payout of 100x to 2,000x for a full reel of jokers. Finally, if you have 200 coins being wagered at a time, then you’ll have jokers show up stacked on all reels instead of the middle one along with an extra payout for filling the reels with jokers.

The Mega Joker progressive jackpot pays out a minimum of €2,000 since that’s the seed value. However, it rarely pays out lower than the five-figure range. What’s really cool about this jackpot is that 3 percent of each wager is paid into it, which is actually pretty high for a game like this, so it hits really often. On average, it hits about 15 to 16 times each month.

No particular bet size or winning combination is required to win on this game, which makes it very accessible to players with all things considered.

How to Win at Mega Joker

Your betting strategy in this game is a little more complicated than in other slots. However, the basic idea is that you should always play on the second screen if you have the ability to, and you should maximize your bet size in that second set of reels as well to keep your return to player percentage as high as possible.

Payouts in this game are a bit different since there are two separate pay tables for each set of reels. We covered the joker payouts up above, but the fruit wins are also noteworthy. In particular, you should notice that playing with 40 coins in the super mode is worth significant more than twice the value than playing for just 20 coins. As a result, you should always play with as many coins as possible in that game mode.

Due to the large appeal to so many players, this video slot has a strong spot in this software company’s offering of slots overall. Along with that, in comparison to other games that use similar themes, this game is different in a handful areas as opposed to just being like other online slots in the sub-genre.

The style of gameplay is tremendously centered on action with a serious amount of opportunities to hit serious payouts, and we really like how the aesthetic appeal gives people an overwhelmingly immersive gameplay style as opposed to only being an afterthought. On top of that, the feature set offers a number of various extra ways to get paid alongside the usual pay schedule.

Which online casinos have Mega Joker?