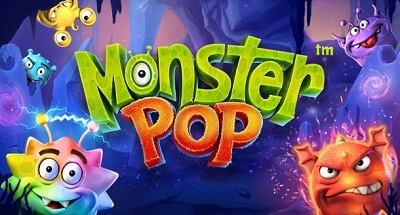 The Monster Pop video slot by BetSoft takes things to a whole different level by discarding paylines and giving you wins based on clusters of matching monster symbols. The features give you more ways to win with these clusters with free spins and monster cloners that give you forced wins on top of extra ways to win on top of that.

An Introduction to Monster Pop

If you’re tired of the same old thing with a new paint job, so to speak, then check out BetSoft’s Monster Pop online slot. This game takes many of the common tropes of video slots and throws them out the window, leaving you with an exciting and action-packed style of play with a theme that looks amazing.

BetSoft is giving players both a tremendous aesthetic value here as well as a style of gameplay that is up there with the best that the industry has to offer.

You’ll find yourself in front of a number of weird stones in a magical sort of cave while a grid of goofy monsters, all of which are crafted using BetSoft’s 3-D graphics that they are known for, line up in front of you. They’re hilarious little creatures with constant animation, and that’s much different than the flat and somewhat boring style that’s more common in online slots.

The key thing to know about this title is that it does not use the typical paylines format. Here’s what to expect:

The format is what creates the atypical style of play here, and it’s really at the heart of the title itself. However, BetSoft did not simply rely on the format being different and leave it at that. They went the extra mile to create a truly immersive experience that brings out a ton of action in the process.

It’s worth noting that the volatility of this game is pretty low, and a large part of that is because, even with the features, the slot is mostly about hitting a lot of small and medium wins instead of the rare chance of hitting a major win.

We’re going to walk you through how the gameplay works for the Monster Pop online slot. We’ll also show you how the features come together to enhance your overall experience.

When you hit a winning cluster of symbols, they will pay out and disappear from the game board. This allows new symbols to fall into place from up above.

From there, you have a new chance to hit winning clusters that you would have missed out on previously. This is essentially an extra chance to win, and that puts players in a position where they can hit several pays on the same spin.

If you get new wins, they will disappear as well for even more cascading opportunities. The turn will be over once there are no more winning combinations available.

If you get to the end of a cascade with no new wins, you have a chance to activate the Monster Fury feature. The monsters will get angry for you and give you another opportunity to win.

The way this works is they will either activate a feature or rearrange themselves to create a win, which then activates the cascade wins feature to keep the action going. This is yet another way BetSoft set up the Monster Pop video slot to give you opportunities for a lot of small and medium wins.

The purple and violet glowing ball symbol is the Monster Cloner symbol. When it appears, it has a chance to increase the size of the game board vertically, horizontally or both at the same time.

From that point, the entire row or column will become duplicate symbols to guarantee a win and to kick off the cascade wins feature. Additionally, the position in which the Monster Cloner appeared will also become a wild symbol, which gives you yet another opportunity to get paid.

During the free spins mode, this cloner will not reset between spins, which means the grid can get bigger and bigger until your feature is over.

There’s an eye symbol with a glowing green ring around it with purple spots and a W in the center of the pupil. This is the Oracle Eye wild symbol, and it will substitute for any symbol to help you to make winning clusters.

This symbol will not substitute for the cloners or for the free spin symbols.

Three or more of the flaming sphere symbols anywhere on the game board will trigger a free spins mode. To figure out how many free spins you get, you simply add seven to the number of scatters you used to trigger the bonus round.

During this feature, the grid will not drop back down to its normal 5×5 size after each cloner. Instead, it will continue to get bigger for each cloner without getting smaller until the feature is over.

What’s more is that every flaming sphere you pick up during the free spins mode adds an extra free spin to your total, so you can really make this feature go on for a while and run up some serious value in the process.

How to Win at Monster Pop

The Monster Pop video slot has a really low volatility with a really high hit-rate. As a result, you will have particularly low swings, and that means that one strategy for this game is to use bet sizes that are larger than usual.

We recommend somewhere between 150 percent and 200 percent of your usual bet size for this game if you’re going to take that strategy. This will keep the swings pretty low while maximizing your payouts from your wins.

There are eight different monster symbols, and clusters of four or more will give you winning combinations. It’s possible to get clusters that are hundreds of symbols in size due to the way the cloner feature works, particularly in the free spins, and the highest tier of wins is for clusters of 101 symbols or more.

However, there are still some pretty good wins at the lower level, and you’ll need to cycle through them all to see what they are for each symbol because this is a very complicated pay table with the atypical format.

The Monster Pop online slot brings players a style of play that they’ve most likely never seen before. We don’t mean the cluster format, since that’s something many players will have seen, but the overall manipulation of the game grid within that format to give you opportunities to hit clusters of more than 100 symbols at once.

Add that to the way the free spins work and the tremendous 3-D graphics, and it’s easy to understand how excited players are about this title from BetSoft.