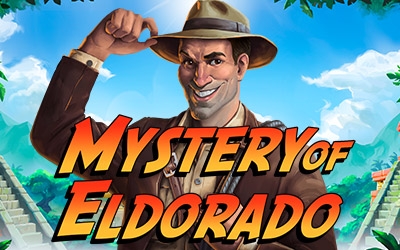 With Endorphina’s Mystery of Eldorado online slot, players will be taken deep into the jungle to a landscape with large stone pyramids. A number of fun characters and golden objects help you to win some pretty significant pays in this game, and that’s on top of a free spins mode with special expanding symbols.

An Introduction to Mystery of Eldorado

There are two main areas that online slots are judged on: aesthetics and gameplay. Endorphina is known for putting together titles like the Mystery of Eldorado video slot that are excellent on both.

Between the graphics, characters, pay distribution and features, players will have a lot to look forward to in this game.

The characters are drawn but really come to life in this slot, and you can tell what their motivations are and what they have come to do just because they are presented so well. On top of that, all of the symbols along with the background look tremendous.

On the gameplay end of things, you’ll have a very strong bonus feature that this game centers around and a pay table that’s particularly generous. These elements combine to put players in a position where they will really want to keep coming back for more just because of the quality that this game brings to the table.

Like most titles by Endorphina, the format of the game has been made really straightforward with options to customize many aspects of the experience. Here’s what to expect:

The volatility of this slot is on the upper end of the low part of the overall range. You will not have swings all that much that are particularly substantial, and the numerous small and medium payouts that you pick up from the regular pay table will help you to keep your balance afloat while you go after the big free spins mode.

It’s worth noting that your RTP percentage will dip if you do not have all of the paylines activated, so we recommend that you always stick with having 10 paylines going on every spin of this game.

There’s a good mix of the regular game mode and the main bonus round in the Mystery of Eldorado online slot. This gives the game a balanced style of gameplay that we’re going to get into in what follows.

The Eldorado logo symbol on a map with a golden background is both a scatter and a wild in this game, and it gives payouts for both. This symbol is evaluated for payouts in two different ways: payline-based wins and scatter wins. That means you can win two different ways with the same symbols in certain circumstances.

The scatter wins are as follows:

We want to point out that the Mystery of Eldorado video slot allows for scatter wins no matter which reels or locations the symbols fall on.

From there, we have the payline-based wins:

If you have opportunities to make more than one type of win on a given payline, you will always be given the single-largest prize available. This avoids situations where you would be paid a smaller win for a wild-based combination than if those wilds were included in a part of a larger combo win for another symbol.

Whenever you get three scatters or more on the game board, you will be given a set of 10 free spins. At the beginning of this feature, one of the regular-paying symbols is chosen to be a special expanding symbol.

Here’s how this works. After pays are given normally, those symbols will expand to cover the reels. Wilds cannot expand. This will give you chances to get more wins than what you would have picked up before.

There is a whole lot of value in what this feature brings to the table, and it goes to show that Endorphina knows how to mix things up and stand apart from the competition.

As is the case for most games by this company, there is a gamble feature that you should actually pay attention to because it’s something that will give you a legitimate increase in your return to player percentage/payout rate.

This gamble feature allows you a chance to play for double or nothing based on a card draw. A random card is shown, and you have the ability to pick from four other cards to pick a card that’s higher than the one shown.

The trick here is that you can view the up card and then leave without playing if you want, so you can then only play when you will have the advantage. With that said, the chances of winning are not proportional to what they would be under normal circumstances because the chances of getting each card are not uniform.

To this end, you should always play when you see a two, three, four or five up, and you should never play under any other circumstances.

How to Win at Mystery of Eldorado

To maximize your RTP percentage in this game, you need to do two things. First, you need to make sure that you always play with all 10 paylines activated. Second, you need to play the double or nothing gamble feature every time that you have a 2-5 showing.

Because the volatility rate is a bit on the low side, we also recommend considering picking a bet size in the range of about 50 percent more than what you normally would since the swings being low will help to protect you from taking on too much of a pull in one direction or another.

Payout Structure for Mystery of Eldorado

All of the above symbols, in addition to the wild, pay for two of a kind or more. However, you need at least three on a line for the remaining symbols.

The two golden symbols, a coin and an idol, pay 15x for five. The blue, red and green gem symbols each give you 10x wins for five of a kind combinations also.

With the Mystery of Eldorado online slot, Endorphina has given players a whole lot to look at with some very solid gameplay. We really like how generous the regular pay table is and how there are so many symbols that pay for two of a kind. This really helps to keep the volatility low, which is something that most players can appreciate.