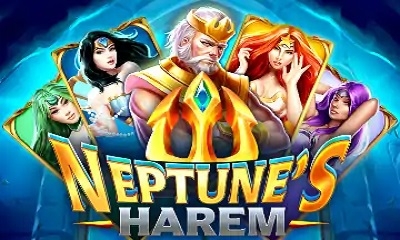 The Neptune’s Harem online slot from Microgaming takes you to the underwater city of Atlantis. Four different mermaids are shown on the reels along with Neptune in great detail. You can win four different jackpots or a free spins bonus round in this game.

An Introduction to Neptune’s Harem

The mythology of Roman times is largely based on similar deities as the more popular Greek mythology. With the Neptune’s Harem video slot, you get the god of the oceans, also known as Poseidon in the Greek pantheon. In any event, he’s the star of the show along with his mermaids in this game.

The gameplay is tremendous in this title and incorporates elements of the mermaid harem dynamic Neptune was known for.

This gameplay is based largely around triggering features. You get lots of ways to get paid, but you’re mostly hoping that keeps your account balance going while you shoot for one of the bigger wins from the bonus features. They’re fairly easy to hit compared to other games, so that’s something to look forward to.

Visually, this is a pretty impressive game for a variety of reasons. The color scheme of the four mermaids is carried over between the major and minor symbols. That gives this slot a level of visual cohesion that adds to the fun. The animated background in the throne room of Neptune is aesthetically pleasing as well. Overall, they did an awesome job with every aspect of the presentation of this game.

We really like how accessible Microgaming made this title. It’s really simple to get started with, and you don’t have to learn anything new or complicated to do so. Here’s what to expect:

Something we want to point out is that all of the payouts are based on how much you’re betting overall. There’s no line-based system with coins, coins per line and all of that other mess here. That system is largely considered outdated, but some newer games still use it for some reason. In any event, you won’t have to deal with that here.

Additionally, you’ll have a medium overall volatility in this game. That leads to a particularly balanced style of play. It also makes sure that this game is something that the most number of players will find appealing from a gameplay perspective.

The feature set for the Neptune’s Harem online slot centers largely around the four mermaids shown in the game. However, there are a few different features with different chances of being hit. That helps to keep the variety going, which appears to be a part of what this game’s concept is about. All of that aside, the excitement is pretty serious here. We’ll show you everything you can expect in what follows.

The trident is the wild symbol in this game. It’s important because it’s essentially the staff that Neptune wields that shows he is the king of the seas. In any event, this wild shows up on every reel of the game in gold, and it offers some pretty good payouts.

There are only two symbols in the game that this wild does not substitute for. Those symbols are the bonus symbol and the scatter. That’s pretty standard in the industry, so most players won’t mind that. In any event, these wilds help you to score some pretty serious wins on their own. However, they also help you to hit other wins you wouldn’t have gotten without their assistance.

Neptune himself makes an appearance on the reels as a scatter symbol. These scatters pay out no matter where they are on the game board. They do not have to be on certain reels or particular lines to give you wins. The payouts they make available are as follows:

Owing to the name and concept of the Neptune’s Harem video slot, we like the idea that he is a scatter all to his own while his four mermaid brides cover the free spins and the regular pay table. It’s a nice balance of the characters that isn’t necessarily what you’d expect. However, it works out really well here.

The golden door bonus symbols only show up on the first and last reels. However, that’s a good thing since it means you only need to get two symbols on the game board to trigger the free spins mode.

Once this mode starts, you’ll get to choose from two piles of golden cards. The first pile will give you the number of free spins, which can be 5, 7, 8 or 12. The second pile determines the multiplier, which will be 2x, 3x, 5x or 10x. Ultimately, you can earn up to 12 free spins with a multiplier as high as 10x. That’s obviously something to get excited about because it’s a tremendous value.

During the free spins mode, you cannot re-trigger the feature as you can in other games. However, to make up for that, any golden door adds one free spin to the total. There’s no limit to the number of extra free spins that you can be awarded in this way.

The Royal League Feature is basically a random feature that can trigger on any regular spin. It cannot trigger on a free spin. Some dice will roll on a square board to ultimately determine which of four jackpots you’re awarded. The values for the jackpots are as follows:

Note that these are static jackpots based on your total bet size. They are not progressives.

How to Win at Neptune’s Harem

With a medium volatility overall, there’s not much that you need to do in this game in terms of betting adjustments. Instead, simply choose a bet size that fits what you’re comfortable with. Something in the middle of the range you’re normally playing with is another good way to go. There will be some moderate swings, but the reasonable hit-rate and chances for extra payouts will smooth a lot of that out.

Neptune’s four brides make up the top four paying symbols. The redhead on a golden background gets you 25x for five. You can also earn 20x for the black-haired mermaid in blue along with 17.5x for five of the green. Five of the purple-haired lady gets you a 15x win. Note that all four of these symbols pay for just two of a kind. This increases the hit-rate a bit and helps to keep the volatility in check.

At the lower end of the pay table, you have four symbols that match the look of the four brides in terms of accessories. The golden star is worth 12.5x for five, and this drops to 10x for five of the blue gem in a blue clam. Finally, the green shell with the purple sphere are worth 7.5x and 5x for five of a kind combinations, respectively.

The fun is only driven up by the tremendous amount to which the visual appeal fits the video slot’s concept. It’s also worth noting that the pay rate of the features in this game is so substantial that you will be sure to not get bored.

This slot is a strong part of this software developer’s whole portfolio because of its presentation and style of gameplay, and if you’ve been a fan of other titles that focus on this style of overall concept, then this is a video slot you will not want to miss. As if that wasn’t enough, the gameplay for this slot gives a tremendous degree of fun.

Which online casinos have Neptune's Harem?