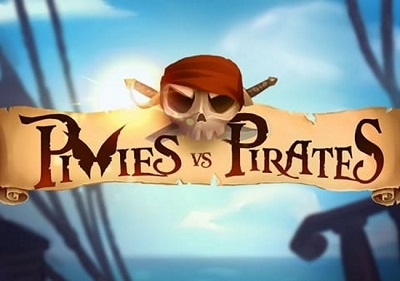 The concept behind the Pixies vs. Pirates slot is exactly what you’d expect, and the creative idea from Nolimit City definitely brings players more action than you might expect with up to 11,664 ways to get paid and some tremendous features that take advantage of the X Ways format that’s used in this title.

An Introduction to Pixies vs. Pirates

When you first check out Nolimit City’s Pixies vs. Pirates online slot, you’re going to notice that the theme isn’t exactly something that’s standard. With that having been said, they’ve ran with this concept in a way that gives players an amazing experience.

Nolimit City was able to pull this off by focusing on the graphics and the elements of gameplay instead of only making one or the other a highlight.

Visually, this title is up there with the best that you’ll find anywhere. It features several characters that have a lot of aesthetic depth while still making them color-coded to make it easier to see if you have winning combinations.

On the other side of things with the gameplay and features, the regular pay table is strong with a particularly high hit-rate from a larger than usual format. Things are set up to give this game a low volatility as well, so you’ll be getting a lot of chances for multi-line wins on every single turn.

The layout is obviously atypical, and it’s easy to see that from the very beginning. This game uses Nolimit City’s X Ways element, which makes certain aspects of the game’s layout variable as well.

It takes a bit of getting used to when you see the number of rows changing on certain reels, but it doesn’t interfere with the gameplay in any way, shape or form. Instead, it basically just serves to give you extra ways to get paid, and we’ll expand on that down below in our discussion of the X Ways format as a feature.

The features in this slot occur both as bonus round and as things that activate during the regular game mode. Because there’s so much going on here, we very much recommend that players get an idea of what all goes into this title ahead of time since it can be very surprising and somewhat intimidating to see things moving around and features being triggered that affect the layout of the game without actually knowing specifically what’s going on.

The wild symbols in this game take up a complete reel, but they don’t necessarily count as more than one individual spot on the reel when they appear. If you get a piece of the stacked wild on any of the five reels, it will always nudge itself to fill that particular column.

Each wild gets a random number from one to six assigned to it. That’s how many wild symbols are effectively on that reel for the purposes of determining the number of available ways to get paid.

The bottom line is that this is a feature that definitely helps players to get lots of extra payouts that would have otherwise been missed, but it can take a bit of getting used to because it stands out as being atypical in how it works.

These wilds count for anything except for the X Ways chests that we’ll go into below or the scatter symbols.

At the core of the X Ways format change is the X Ways chest symbol. This appears as a sort of pirate’s chest with wings, which fits both sides of the Pixies vs. Pirates online slot motif. When this symbol appears, it expands to offer two to four of a matching symbol that’s randomly chosen.

This also works as a feature because it always offers multiples of the same matching symbol. With the all ways format that this game has in place, that means you’ll get more opportunities to hit multi-way payouts.

When you get three of the scattered Pixies vs. Pirates slot logo symbols on the reels at the same time, no matter the position, then you get access to the Battle Rounds Free Spins bonus.

Your number of free spins is determined by how many scatters you get since three scatters gives you six free spins and four scatters awards you eight.

During these Battle Round Free Spins, you’re going to have two to five reels always fully expanded to give you six rows, which means a lot more ways to get paid and a lot more opportunities for several wins on the same turn.

You get to pick between the pixie queen and the pirate captain, and for whichever side you pick, you’ll collect that symbol during the feature. If you pick the side that has the most of those symbols, then you’ll re-trigger the feature to get even more ways to win. What’s great is that if there’s a tie, you’ll trigger the free spins again anyway.

How to Win at Pixies vs. Pirates

With games like this that have a particularly low volatility, what you can do is increase your bet size a bit since that will lead to swings of a similar size as if you were playing on a game with a more normal level of volatility with a smaller wager.

The effect of this is that you get more opportunities to run up bigger wins when you hit the Battle Rounds feature or line up the wilds with an X Ways chest for a massive multi-way win, but you limit your risk at the same time since the volatility is so low.

Payout Structure for Pixies vs. Pirates

The wins in this game are based on multiples of your total bet size. Keep in mind that there are often thousands of ways to win on each turn, with special weight put to multi-line pays, so these prizes might seem smaller than they really are relative to how the game works.

You can earn 3x for six of a kind of the golden pixie queen or the red pirate captain. Payouts of 2x are yours for the green pixie archer or the purple lady pirate holding a bomb. Finally for the end of the top-level symbols, prizes of 1.5x are yours for five of the pixie with a flute or the pirate with long braids and a knife in his mouth.

From there, you have six card rank symbols. From the yellow A down to the violet 9, you’ll have payouts ranging from 1.25x for five to 1x for five of a kind.

All of these symbols pay for three of a kind or more.

Everything about the Pixies vs. Pirates online slot centers around giving players an action-oriented experience with a high hit-rate and a low volatility. This is a style of play that appeals to most, but not all, players.

Overall, it’s a great game based around an atypical title that’s a lot of fun. If you like quirky games that look and play great, this will also be a good one to try.