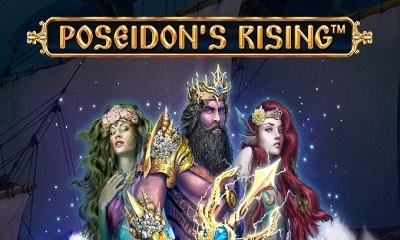 The Poseidon’s Rising online slot from Spinomenal offers players tons of deep sea mythological action with a lot of edge. Action is the name of the game with 50 paylines across six reels and a lot of different features and stages of bonus rounds to work through.

An Introduction to Poseidon’s Rising

If you’re the type of player who likes more serious themes in your games, you’ll love what Spinomenal put together with their Poseidon’s Rising video slot. They took the theme of Poseidon, the brother of Zeus and god of the seas, to a whole new level.

From the art style to the way the features come together, this game was clearly made for serious players.

We don’t think that the majority of online slots are all that visually striking. While there are definitely some, we wouldn’t say it’s the norm or even that it’s typical. However, this title is the exception to the rule. We aren’t exaggerating when we say the art style is absolutely amazing. It looks like something you would hang on your wall. The amount of detail is incredible for a video slot, and with the mythological themes, they were given great source material to work with.

Despite how great this title looks, the gameplay is right up there with it in terms of quality. It’s all about giving players lots of ways to get paid on the regular reels. However, along with that, the feature set is pretty deep as well. Everything ultimately ties back into the Greek mythological theme in one way or another as well. Subsequently, this title has a pretty cohesive feel to it that makes the whole experience particularly immersive.

The format of this title is slightly different than what you normally see in modern slots. However, it’s not anti-intuitive or tricky to learn by any means. Instead, it’s just set up a little differently than the usual fare. Here we break down what you need to know about the layout:

The volatility of this title is something to keep in mind because of all of the features. With 50 lines active all the time, the hit-rate is pretty reasonable. However, due to all of the value that the features offer, the volatility is pulled up a solid amount. We place it in the medium-high range in the sense that it’s a bit above-average.

Additionally, wins are described in coin amounts with the idea that you’re wagering one coin per line. For example, with a €2 bet size, that’s a coin size of €0.04 each since you’re simply dividing by 50.

Lots of features are used in the Poseidon’s Rising online slot. However, it’s not just the breadth of the features that’s so interesting here. It’s also the depth of them, and they’ve brought a lot of great ideas together that mix in with the theme really well. In what follows, we’ll be doing a deep dive into the bonus rounds and other game mechanics to make sure that you have a good idea of what to expect.

The god of the seas himself is the wild symbol in this title. He appears everywhere on each of the six reels at one time or another. Additionally, he offers the best payline-based win that this game has available. Here’s a look at the prizes you can win with this wild.

As you can see, that 2,000x top win for six of a kind is nothing to turn your nose up at. Additionally, he helps you to get a lot of extra winning combinations across the 50 paylines.

One reason for that is that he appears stacked multiple symbols high. As a result, it’s not uncommon to see him cover an entire reel at once. This drastically increases your chances of hitting payouts in the general sense. However, it also makes it more likely that you will hit multiple payouts at the same time.

The bonus symbols in the Poseidon’s Rising video slot are all about earning free spins. They appear on the first, third and fifth reels only. However, when you get all three on the board at once, a feature is triggered.

However, you won’t jump straight into the spins themselves. Instead, you’ll be taken to the Free Spins Map, which shows symbols relating to the four free spins modes you can get in this game.

When you’re in the Winning Symbols Re-spin mode, every paying combination makes a re-spin happen. The wins themselves stay in place, and you get new opportunities to create additional payouts or add to existing ones. These re-spins keep going until you don’t add to your existing wins.

A stacked sea dragon will start on the first reel on the far left. It’s wild, and it’s cover the entire reel. After each spin, it will move one position to the right. The feature ends when it’s all the way off of the far right-hand side of the game board.

When a wild hits the board in this mode, it always expands to cover the reel. Note that Poseidon no longer lands on the board in this version of the free spins. Instead, the redheaded nymph symbol becomes a stacked wild. With that said, six wilds will still pay out 2,000x in all of these bonus modes.

The siren symbol becomes wild and shows up on the middle of the third row. Additionally, she stays in place for the entirety of the feature. From there, two to six extra wilds will land on random positions during each free spin to give more ways to get paid.

An additional feature based on the name of the game itself is available in the Poseidon’s Rising online slot. A special version of the wild Poseidon symbol can show up on the third reel to activate this feature. This is essentially a re-spin mode where the stacked special wild will nudge upward one spot for each re-spin. You can end up with as many as five re-spins with this feature as well.

How to Win at Poseidon’s Rising

Since the volatility of this game is above-average, you can expect your swings to be above-average in size and frequency also. However, not everyone prefers games with these types of swings. Thankfully, a really straightforward betting adjustment can help with that.

If you lower your bet size slightly, you can effectively lower your volatility and average swings. However, this will be with respect to the betting amount that you were starting with initially.

Additionally, your betting adjustment shouldn’t be too large. A drop of around 25 percent to about 33 percent is ideal for this type of change. While this adjustment is optional, and you can bet whatever you prefer, the drop in volatility will be quite substantial if you make a larger downward change to your bet size.

Aside from the wild, Amphitrite (the wife of Poseidon) is the top-paying regular symbol. She gives a 750x win for five of a kind. Additionally, a redheaded sea nymph earns you 500x for six of a kind on a line. From there, a giant green Leviathan-like dragon pays 400x for six, and six of the Kraken earns players 200x as well.

The card rank symbols are designed with royal flourishes that look great in this game’s overall setting. They have a gorgeous texture to them as well. In any case, the red A and orange K pay out 100x and 70x, respectively, for six of a kind. Lining up six of the yellow Q or green J will get you 60x and 50x as well. Finally, a 40x payout is yours when you get six of the blue 10 on an active payline.

Everything is focused on action with the Poseidon’s Rising video slot, and that is wonderful news for those who would rather have an exciting type of gameplay. Along with that, the graphics level and visual appeal of this video slot brings an overall tone that is competitive with some of the best that the online casino industry overall has to offer, and we don’t say that lightly.

A variety of free spins features can be found in this title, and that is something we can’t assume for much of the slots world as a whole since one (at most) is pretty much the standard. Overall, this slot is a fitting part of Spinomenal’s whole portfolio because of its supreme graphics level and action-oriented style of gameplay. It’s also worth noting that the driving deep sea mythological concept put on display as the center for this game is a great launch pad for the style of gameplay and excitement.

Which online casinos have Poseidon's Rising?

What is the Return to Player (RTP) for Poseidon's Rising?