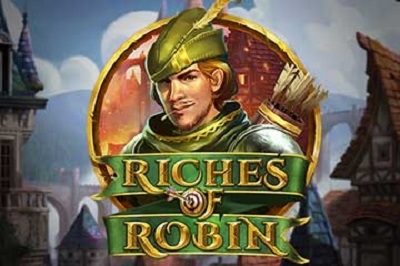 Play’n GO’s Riches of Robin online slot brings the tale of Robin Hood and his merry men to the reels in a way that’s never been done before. A tremendous amount of depth has been put into all of the characters, and the gameplay is exciting and action-oriented just like the original story.

An Introduction to Riches of Robin

Most people in Western countries grow up learning about Robin Hood at some point, a mostly fictional individual who “stole from the rich and gave to the poor.” While the story is a bit more complicated than that alone, Play’n GO brought the characters from this story together into their Riches of Robin video slot.

There have been other titles by other providers on this same story and theme, but this title stands out among the rest for giving the characters more depth and for providing a higher level of gameplay.

The visual appeal of this title is pretty serious as well. It’s one of those games where you can sit for several minutes just admiring the depth and detail of a single character on the reels before another catches your eye a little while later.

On top of that, the gameplay is outstanding with a feature-oriented style of play that’s balanced with solid, frequent wins from the regular pay table.

The format for this medieval title is pretty standard and gives players an opportunity to hop straight into playing without having to learn anything new. Here’s what to expect:

What we really like about the format here is that they didn’t go out of the box at all, which is something that could act as a barrier for players who don’t want to have to learn something new. Instead, they made it a really easy game to jump right into.

Also, the volatility of this game is on the low end as well, which keeps the swings and variance at a minimum.

The feature set for the Riches of Robin online slot is centered around simple and straightforward sources of value that hit more often than what you see in other games. This lends itself to a gameplay style that’s about a high hit-rate with lower average payouts since the pay table centers around lower and mid-range wins.

Robin Hood in his green outfit and hat with a golden feather is the wild symbol for this game, and that makes sense considering the whole thing is named after him.

This symbol has a golden frame around it, and it will give you the following wins:

The scatter symbol is the only thing that this wild does not substitute for. What that means is that you’ll be getting a number of extra wins that you would have missed out on without this wild symbol, so there’s some serious value tied up here.

The target symbol with a golden band around it is the scattered bonus symbol in this game. It only shows up on the second and fourth reel, and if you get both of them on the reels at the same time, then you will activate a free spins bonus round.

Players will be given a random number of free spins worth up to 20 total. What’s more is that you can get a random multiplier as well, and that can be worth up to 5x to give you some tremendous wins.

A key feature for this free spins mode is how the re-triggers work. Each re-trigger will give you two extra free spins with a +1 increase to the multiplier for the rest of the feature. However, if the multiplier gets up to 10x, then it will stay put for future re-triggers, and you’ll be given an additional four free turns instead.

Money bags can appear on any reel, and they are the key to the Heist Re-spin Feature. The way this is started is that you need to get at least four money bags located anywhere on the grid of symbols.

You’ll always start with three re-spins on the counter, but each new money bag that hits the reels will reset that counter to three.

What happens is that all of the reels will spin with the money bag symbols staying in place. This will keep happening until you run out of re-spins, but keep in mind that new money bag symbols will stick in place to restart the feature as well.

What’s interesting is that you can end up getting one of the jackpots listed at the top of the game board with this part of the feature as well if you get a bag with the corresponding gem on it.

Additionally, you have a random chance of being awarded the value shown on a money bag symbol if they show up during the regular game mode.

How to Win at Riches of Robin

The low-volatility nature of the Riches of Robin video slot means that you have tons of flexibility when it comes to strategic approaches to this game. There are two in particular that stand out.

One option is to simply increase your bet size to something in the range of about 150-200 percent the usual size that you would use. You’ll be protected from swings because of the low volatility, but your wins will be greater.

Alternatively, you can keep the same bet size but increase your spins per hour. The autoplay feature is a good option for this, but the basic idea is straightforward.

Payout Structure for Riches of Robin

Outside of the wild symbol, you’ll get plenty of chances for solid wins, and it starts with the character symbols.

The woman with the purple background pays 20x for five. Five of the blue man with the beard gets you 16x. The man in red with a hood and a dagger pays 12x for five of a kind combinations, and you can earn 8x for five of the man playing the instrument in green. Finally, the man in orange who is bald with a turkey leg in his hand will get you 6x.

Four different gem-themed symbols based on the four card suits can also be found here. Each of them pay 2x for five of a kind on a given payline.

Play’n GO’s Robin Hood-themed Riches of Robin video slot is an action-oriented game with a graphical style that’s particularly catchy. We love how the characters each have a lot of depth to them while they are still color-coded in a way that makes it easy to recognize when you hit winning combinations.

The feature set is also strong with multiple ways to get paid, and they all make sense with the Robin Hood theme. When you ass the top jackpot to the mix up above the reels, you get a ton of ways to get paid some pretty serious amounts in an environment where the volatility is very tame.