Rise of Athena Casinos and Review 2020 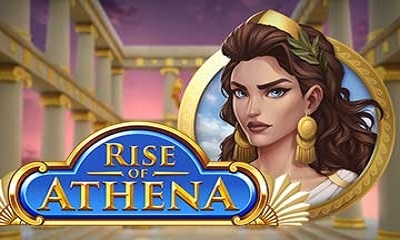 The Rise of Athena video slot by Play’n GO is a gorgeous, artistic game dedicated to the goddess of wisdom. Scatter wins and free spins add to the value that you get from the wild multipliers here. On top of that, the pay table is very balanced with good payouts as well.

Casinos with Rise of Athena

An Introduction to Rise of Athena

Games based on Greek mythology are pretty common in the video slot industry. However, Play’n GO’s Rise of Athena online slot is different than what you typically see in the sub-genre. This is because they know how to pay a lot of close attention to detail.

The end result is a very immersive game with an exciting style of play.

The most important thing to point out first is the cohesion of this title. What we mean by that is that every single aspect of the game fits together perfectly. The features, the symbol set and the overall concept merge in a way that you don’t typically see in the industry as a whole.

Additionally, this is just an absolutely gorgeous game. It has incredibly smooth graphics that look perfect for the slot’s concept. You can really tell that a lot of effort was put into making sure that this game looks excellent. As a result, the aesthetics really add to the overall experience to the point that the gameplay just feels better.

This game has been designed to be as smooth and easy to learn to play as possible. The format is really simple, but it’s still very effective. Here’s what to expect:

One more thing to keep in mind about this title is that the volatility is really reasonable. It’s on the lower end of what we typically see in the industry. As a result, you don’t have to worry about very severe swings at all. This helps to keep the gameplay experience smoother and more relaxing.

The gameplay of the Rise of Athena video slot is set up to be both simplistic and exciting. It’s simplistic in the sense that it’s really easy to see what’s going on. However, it has enough depth with the pay table and feature set to keep a lot of excitement. This is a great balance that makes this game an awesome fit for a whole lot of players.

Wilds can appear on each reel. They can also show up with multipliers ranging from 1x to 3x. Any win that includes a wild multiplier will be multiplied by that amount.

If more than one wild multiplier is found in the same winning combination, then their values add together. For example, with a 2x and a 3x, they will add to give you a 5x multiplier overall.

The wilds can also give some pretty good payouts that are the equivalent of the best found of the regular symbols. These wins are as follows:

Note that these wins do not include multipliers on any of the payouts.

The owl symbol gives players the best payouts available in the Rise of Athena online slot overall. This comes with the following wins:

No matter how many scattered owls you get on the game board, they all give you 12 free spins if you pick up at least three of them somewhere on the reels. During these free spins, however, things work a little differently.

First, all wilds start off as sticky. This means that they will persist for multiple spins. However, the multiplier will decrease after each spin. Once a multiplier goes from 1x down, that wild disappears, and the spot it was in operates as usual once again.

This is a cool free spins bonus round variation. We really haven’t seen something like this before, and it’s nice to see a spin on such a common type of feature.

How to Win at Rise of Athena

With the way the betting is set up, there aren’t any options you have that will allow you to change your return to player percentage for this title. As a result, the only real thing that you can change with your betting is your overall swings.

Since the volatility of this game is pretty low, you can get away with a higher bet size than usual. This will give you better wins than you would typically get otherwise. However, it will also lead to swings that are still pretty reasonable. That’s the kind of win-win situation that a smart adjustment like this will lead to.

Payout Structure for Rise of Athena

Athena is the best-paying regular symbol, and she has the same wins as the wilds with 150x for five. Five of Pegasus the flying horse gets you 30x. Things drop just slightly to 20x, 15x and 10x for five of the helmet, vase and scroll symbols. As you can tell, this is a very balanced pay table. The only exception is how the scatter, wild and Athena payouts are a bit higher than the rest.

The card rank symbols were done really well by Play’n GO. They are set in stone and have decoration that looks perfect given the theme. The A and K symbols each pay 6x for five of a kind. From there, you can win 4x for five of the Q or J. Finally, five of a kind combinations of the 10 get you an award of 2x.

The gameplay style for the Rise of Athena video slot offers a whole lot of fun. As a part of this company’s selection of slots overall, this is a video slot that holds a critical position since it has appeal to a lot of players, and what players will absolutely love with this title is the additional value that the selection of features add to your account balance.

The graphics level and visual tone of this game offers an aesthetically pleasing look that’s competitive with most that the online slots industry overall has available. It’s also worth noting that the overall theme put into play as the centerpiece for this slot is a central foundation for the play style and excitement.