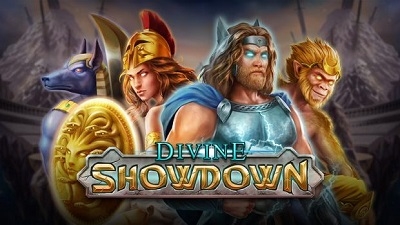 The Divine Showdown video slot is a title by Play’n GO that features different sets of deities going at it on the reels. You’ll have different gods and goddesses to choose from when these fights happen, and these fights can take place over free spins to give you a ton of value as you reap the rewards of their conflicts.

An Introduction to Divine Showdown

Something most players like to see in the online slots world is interactive features that give players some degree of influence or choice in what’s going on. The entire premise of the Divine Showdown online slot is based on this idea as you have gods from different cultures and pantheons taking each other on across the reels while you pick up the payouts that come along the way.

Play’n GO has definitely put their own spin on this genre by incorporating lots of different deities from a variety of sources.

As far as how this title looks, it’s up there with some of the best graphics that you’ll get from Play’n GO’s entire portfolio. It looks super solid with a background with swords sticking out of the ground.

When it comes to the gameplay, this is a feature-based title with a ton of action, which makes sense considering that the game is based on gods and goddesses going into battle with each other.

The format is pretty solid as to form a good foundation for the rest of the gameplay and features, so you won’t really have any surprises here. Here’s what you’ll get:

The heavy number of features in this title increase the volatility somewhat, so it’s not super low, but it’s more on the lower end of medium. It’s not really enough that most players will care about adjusting their bet sizes all that much, but it’s something to keep in mind.

Also, all wins in this game are multiples of the total bet size. This game does not use payline-based wins, but if you’d prefer to know what the equivalent wins would be based on payline-centric wagers, you can multiply them by 20 to see.

This game is completely packed with features. There are so many features that we’re just going to dive right in and show you what’s available in this game.

At the top of the reels, there’s a small window that can open up to the right of the Divine Showdown online slot logo. When it opens, it can show a random multiplier on any given spin worth between 2x and 10x.

All of your wins for that particular spin will be multiplied by that given amount.

It’s worth noting that this is available during both the regular game and during the Power Spins that we will describe below, so it has a chance to give you a whole lot of value no matter which part of the game you’re in.

On any random spin, you can activate a power spin. This gives you one of four random features applied to that given spin:

Every single one of these four features adds a whole lot of value to the game experience, and considering they can be combined with random multipliers that go as high as 10x, it’s clear that the Divine Showdown video slot is all about giving players a ton of value from the feature set.

If you pick up at least three scatters anywhere on the game board, then you’ll be given a shot at the Free Spins battle between the gods.

You’ll pick one of the four gods to play this feature: Wukong, Anubis, Athena or Thor.

You start with three lives in this feature. There’s a special battle reel that decides how the action goes, and you basically get free spins until the battle is over and you’re out of lives. You’ll get tons of the power spin features activated during this feature, and you’ll also still have access to the random multipliers worth as much as 10x.

The wild is a flaming sword symbol, and you get the following payouts for it:

It’s important to note that this symbol can show up stacked as well, and that makes it even easier to get extra winning combinations.

How to Win at Divine Showdown

With the Divine Showdown video slot, you don’t have any decisions to worry about that affect your RTP, so there are no mistakes that you have to make sure you’re avoiding on that end of things. Instead, with its medium-low volatility, you should really just choose bet sizes that you’d typically be comfortable with and go from there.

The volatility is low enough to be comfortable for virtually everyone, but it’s not so low that we’d recommend increasing your bet sizes a bit to take advantage of the lower opportunity for swings.

The four gods round out the top end of the pay table. Five of a kind of Thor gets you 16x, and five of the Athena symbol is worth 12. Wins of 8x are available for five of the Anubis or Wukong symbols, and this covers mythological figures from a variety of different times and cultures in a very smart way.

The rest of the symbols are card ranks, and they have a very strong, metal-inspired look to them. The A, K and Q pay 2.5x, 2x and 1.5x, respectively. At the bottom end, the J and 10 symbols give you 1x wins for five of a kind combinations.

Play’n GO decided to really go all-out with the feature set used in the Divine Showdown video slot. You get more usual features like the free spins mode, but you also get a lot of other random features that you don’t see all that often like the random multipliers. These features aren’t just there for the sake of being able to say they have them either, and you’ll really get some serious value from what they have to offer.

With that said, the theme of the game is also super-solid. There’s a lot to be said about having gods from different times and cultures come into conflict with each other, and the fact that they had this play out in a bonus feature is even more impressive.