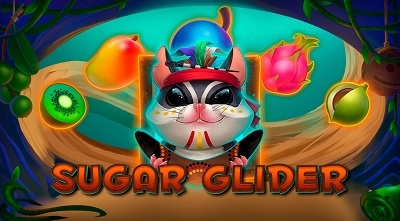 The Sugar Glider Dice online slot by Endorphina brings the cute sugar glider animals to the reels with an Asian dice twist. You’ll have a super-expanding wild and other features to help you pick up some serious wins in this 10-payline affair all while the sugar glider looks to help roll the dice in your favor.

An Introduction to Sugar Glider Dice

One thing that we see from Endorphina is that they will build games on top of each other to create a sort of series even if there isn’t a straightforward sequel to be made. This is the case with their Sugar Glider Dice video slot since it’s a sequel of sorts to their original Sugar Glider game.

This super cute animal shows up once again to assist you in running up some serious payouts.

The theme of this game has an Asian twist with a focus on trying to line up dice that have rolled matching numbers, and that’s something a bit different that we haven’t really seen anything like before.

The gameplay centers around some pretty straightforward video poker motifs, and while they don’t go outside of the box here, that’s fine since it caters to a style of play that most people will find enjoyable.

The format of this game is set up to be really easy to understand so that there aren’t any hoops to jump through, so to speak, to get started playing. Here’s what to expect:

The hit-rate of this game is really high because of the way the paylines work. The fact that most of the value in this slot comes from the regular pay table also adds to this fact quite a bit. As a result, the volatility is really, really low, and the hit-rate is super high. This makes the Sugar Glider Dice online slot perfect for players who do not like big swings in their play.

Everything about this title focuses on the regular pay table. From there, there are certain options you need to configure and use in this slot that you might not in others if you want to get the best payout rate available. We’ll walk you through everything you need to know in the following.

How Pays Are Determined

In most video slots, wins will go from the leftmost reel toward the right only, and in some, they will go in both directions.

You get both of these ways to win in this slot, but you also get winning combinations that line up in the middle three reels only.

Effectively, you can win by lining up matching symbols in adjacent spots on a given payline no matter where those spots happen to be located. It’s really important to understand this before you get started playing so that you do not get confused about where your wins are coming from.

There is a mantis symbol holding a golden die, and he is the wild in this game. He only makes an appearance on the center reel, and while that would be a drag in most titles, it’s not in the Sugar Glider Dice video slot.

The reason for that is that this wild is actually a super expanding wild. When he shows up, not only will he turn the entire middle reel wild, but he’ll also turn the second and fourth reels completely wild as well.

As a result, getting this wild turns nine of the 15 board spots wild and sets up a situation where you get a lot of winning combinations guaranteed.

It’s worth noting that you’ll be given the best possible win on each individual payline, but you won’t be paid for multiple combinations on a given line from this wild or any other aspect of the gameplay.

Do not ignore the gamble feature in this game. A failure to handle this gamble feature correctly will hurt your average payout, also known as your RTP percentage.

This is so important that we’re going to say it again: If you do not play the gamble game, then you will have a loss in your payout rate for this slot.

Here’s why that works the way it does. Every time you get a win, you have the option to go into the gamble feature. It will show you a card facing up, and you have the option to pick from four cards facing down. The catch is that you do not have to actually choose and can instead go back to the regular game, which allows you to choose only when it’s favorable to do so.

If you always play the game, you’ll take a loss worth about 16 percent of your win. However, if you only play when you see a two, three, four or five, then you’ll get a pretty substantial average boost to your wins. Playing with a six, seven or eight will break even, and playing with a nine or higher will lose big time.

How to Win at Sugar Glider Dice

There are two options you have in this game that can change your average return to player percentage rate. The first is that you should always play with 10 paylines activated, and that’s even if it would mean that you drop down your bet size otherwise.

The second is to always check the gamble feature when you hit a win and to always play it if you have a five or lower (not including aces, which are always high in this mini game).

The sugar glider himself is the best-paying symbol in this slot. You’ll win 100x for five of a kind of this guy, multiplied by your total bet size (this is like a 1,000x line bet wager win).

From there, things drop down to the purple six and orange five on the dice. These both pay 50x, or 500x as a line bet win. The yellow four and blue three pay 20x (200x), and the red two with the green one are the lowest-paying symbols in the game at 10x (100x).

This is a pretty balanced pay table even though almost all of the wins are based on what are effectively different rolls of the dice, but it comes across actually looking really nice because of the colors and accents used by Endorphina.

There’s no denying that the Sugar Glider Dice video slot will not be everyone’s cup of tea, so to speak, because of the theme and the incredibly high hit-rate/low volatility. However, our experience tells us that the majority of players will enjoy this game.

The expanding mantis symbol and the resulting wins are pretty cool, especially with how you can win from the left to right or right to left (or three in the center), which maximizes your gains from this type of feature.