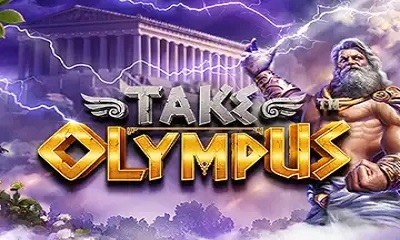 The Take Olympus video slot from Betsoft is all about giving players different features on a cycle. This innovative gameplay concept drives the action in a very serious way. Free spins, extra wilds and tons of other features give you chances for big payouts on a regular cycle.

An Introduction to Take Olympus

Despite there being tons of games, easily thousands, in the video slot sector, there’s something we don’t see much when it comes to the styles of play and the themes in terms of things matching up and working together really well. The formats and game concepts are typically pretty independent of each other.

Betsoft went in a different direction with their Take Olympus online slot.

What we mean is that the gameplay is completely driven by the Greek mythology theme. Five very important figures from the Greek pantheon have been selected for this title. Each of them have their own features and their own time to shine on a regular schedule.

Aside from the innovative approach to gameplay, the aesthetic appeal is very serious here as well. The characters are drawn with a ton of attention to detail. Even the minor symbols look great. Additionally, it all happens in front of a gorgeous background located in the ruins of Mount Olympus.

Betting for this game is really straightforward, but the way the game plays is a bit different. We’ll get into the details of that further down below. Here’s what to expect with the format:

Aside from the details of the betting being a little odd in some places, it’s easy to jump in and get started. The wins are listed as multiples of the total amount you’ll wager as well. From there, you have a fairly low volatility because of how regularly the features hit, how high the hit-rate is for small and medium payouts and how much value you get from the fact that the game plays on a cycle.

Something that’s important to note is that the functional gameplay of the Take Olympus online slot is pretty normal. Each individual spin plays like a regular slot. However, the gods come through on a cycle, which changes things up quite a bit. Here we’ll break down what you need to know about this cycle and its features.

The Cycle of the Gods

This game is played in sets of 10 spins. One of the five Greek deities used for this game will be active on each set of 10 spins. Once that set is up, another is randomly chosen to be next in line. Note that these are chosen in random and do not go in any particular order. However, once a cycle ends, a new god is always chosen, and the same god won’t be available.

The current active god and the number of spins left with that god are listed on the bottom left corner of the screen beside of the reels.

When you’re in Apollo’s cycle, the bow and arrow are really important. Each spot where those symbols or the Apollo symbols land during your 10 spins will be specially marked. They stay marked until your 10 spins are up. When you get to the last spin of the cycle, all marked symbols turn into wilds.

Note that these wilds can substitute for anything other than the Zeus symbol, so they’re pretty valuable.

In the Aphrodite cycle, it’s the leaf symbols and Aphrodite symbols that mark the game board. On the last spin of the cycle, a mystery box is placed over each of the marked spots. If paths exist horizontally between mystery boxes, those will become mystery boxes as well.

Once the position of the boxes is determined, a symbol is randomly chosen to cover for every one of those boxes. This symbol cannot be wild.

The trident and Poseidon symbols are important during the Poseidon cycle, but they do it differently. Instead of marking the game board, they run up a counter. The counter begins at 1 and increases for each of them.

On the 10th spin of this cycle, you’ll get free re-spins. However, the number of spins you get is determined by the counter.

When you’re in Hades’ cycle in the Take Olympus video slot, both him and the three-headed dog Cerberus increase the multiplier for the final spin. That multiplier is applied to any win that you get on that 10th spin, so you can end up with some pretty crazy payouts thanks to how it works.

Zeus was made to be special in this game since he’s the king of the gods. In this case, he shows up wild on the reels during this mode. However, if he covers an entire reel with his symbol, you get 10 free spins as long as all four other gods show up somewhere on the game board.

On the 10th spin, he’ll choose one of the other four gods and give you a feature based on what they bring to the table.

How to Win at Take Olympus

The real thing to see in this game is that the volatility is pretty low. This is because you’re guaranteed features on a regular basis. Along these lines, you also want to make sure to always play through your set of 10 spins so that you aren’t left hanging without hitting that feature.

In low-volatility games, you can adjust by increasing your bet size. A moderate increase of 50 to 75 percent is plenty, but you can obviously go lower. We don’t recommend going any higher than that, however. This will increase your wins, but with the volatility being so low, the swings won’t be very serious.

Zeus is the top-paying symbol and gives 6x for five of a kind. Five of a kind combinations for any of the other five gods will get you a 2x win. That makes it really easy to remember the top portion of the pay table.

On the lower end of things, you get five smaller emblems in gold on different color backgrounds. They each correspond to the five gods. Zeus gets his lightning bolt, and it pays 1.2x for five. The other symbols include a trident, Cerberus, a bow and arrow and a leaf. In this case, you’ll get 0.8x for five of any of those four symbols.

All wins require at least three of a kind on a payline.

The hit-rate of the range of features in the Take Olympus online slot is so serious that slot players will be sure to not get bored. The feature-centric style of play of this video slot is all about offering you a serious degree of fun, and the overall concept is handled in a particularly cool way in this slot, as opposed to it only being a non-critical detail like what we see in most video slots.

We truly enjoy how the aesthetic appeal gives slot fans a more intense gameplay style instead of just being a formality. Along with that, since this game gives a tremendous degree of quality while still having a lot of value individually, this slot fits really well in this software developer’s selection of slots overall.