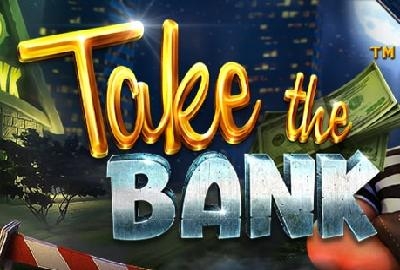 The Take the Bank video slot by Betsoft is all about being on a funny and exciting bank heist. This game offers a whooping 75 ways to get paid on each spin, and you’ll have multiple bonus features like free spins with tons of extra wilds as well as others that help you to get paid from the results of this virtual bank heist.

An Introduction to Take the Bank

A ton of movies, television shows, books, video games and other forms of entertainment have been centered around stories that involve some type of major bank heist. For whatever reason, this is a concept that really gets our attention as human beings, and Betsoft has put together the Take the Bank online slot along similar lines.

Take the Bank does not take itself as seriously as most of these other stories, however, and it’s more centered around a humorous view of the whole scenario.

We’re glad to see not only a variety of different types of themes in slots but variety in how they are handled, and this title is a good example.

With that said, the graphics are very strong, which is what you would expect from Betsoft and their long history of high-end 3-D slots. The gameplay is also great since it’s action-oriented with a lot of influence from the features, which is a style of play that really fits the bank robbery motif.

The very first thing that many players will notice about this game is that it uses a slightly larger format than what’s standard in the video slot industry. This helps to really make the features work, and here’s what you can expect:

Because there are so many paylines, some of the wins might seem a bit on the small side. What you’ll find that compensates for this is the fact that there are an incredible 75 paylines on each turn, which drastically increases the hit-rate. Additionally, the features are set up in a way to give you a lot of opportunities for multi-line wins, which compensate for this quite a bit as well.

As we mentioned above, the features drive a tremendous amount of the gameplay with an action-oriented focus that works well with the bank heist theme of the Take the Bank video slot. They also help to increase the hit-rate, which meshes well with the incredible 75 paylines that this game has to offer.

This game is played in rounds of 10 spins. The bomb counter on the lower right-hand side of the game screen keeps up with how many spins you have left to go before a bomb detonates.

When the counter goes off, on that spin, every one of the robber symbols will turn into bombs that are wild for that spin only.

What this feature does is adds a significant number of extra wilds to the reels, and in turn, that means more opportunities to get payouts you would have missed without them. This is one example of the features increasing the hit-rate and the opportunities for multi-line payouts in this slot.

What’s important to realize is that these robber symbols are sticky until the countdown gets to 10, so you have bombs essentially accumulating on the reels until that tenth spin, which drastically increases the value of the feature.

Payouts for just a wild symbol combination are pretty strong. They include the following wins:

What you’ll find is that most of your value from the wilds comes from the fact that they accumulate for every tenth spin thanks to the bomb progressions feature, which is something we’ve never seen used before in any way, shape or form. That makes it a very fresh and exciting feature.

On the second, third and fourth reels only, you’ll find scattered police car symbols. These symbols show up to help you win a free spins bonus mode if you get all three of them on the reels at the same time.

You will always be given a total of 15 free spins whenever you trigger this feature.

It’s important to note that the bomb progression counter is stopped for this feature, and a different way of handling those wilds is put in place instead. On every single spin, you will get five, seven or ten total wilds randomly placed on the game board.

The positions of these wilds will change after each spin, and they give you tremendous opportunities for some pretty serious pays during this bonus round.

How to Win at Take the Bank

For some games, we recommend using a bet size that’s higher or lower than what you normally would while simultaneously changing the length of your sessions in one way or another to help balance your play around the volatility of a slot.

In this game, we’re going to suggest that you stick with your regular bet size and normal session length. This is because of two things. First, the volatility of the Take the Bank online slot is on the lower end of medium, which means that you don’t really need to do anything to compensate for that.

Second, the hit-rate is very much based on playing sets of 10 spins, so make sure that you never end your session unless it’s on that tenth bomb progression spin that gives you chances for lots of extra wilds on the reels.

Payout Structure for Take the Bank

The top-paying symbol in the game is either the diamond or the wild because they both have the same payouts. This includes a 3.00x win for five of a kind. They both also pay for two of a kind or more and are the only symbol that does not always need three of a kind for a win.

At the bottom end of the pay table, you can get 0.60x for five of the green A as well. However, the cyan K, red Q, orange J, purple 10 and violet 9 all pay out 0.30x for five matching symbols on a payline.

The action is very serious in the Take the Bank video slot, but the presentation of the theme is not unless you’re talking about the quality of the graphics, sound and animations. This is not a game that takes itself too seriously just because it’s based around robbing a bank.

Instead, Betsoft has allows the gameplay and features to speak for themselves, and the message that the player gets from them is loud and clear. You’ll have frequent and serious chances to take down significant wins thanks to the way that the features are set up to work in this game.