The Grand Galore Casinos and Review 2020 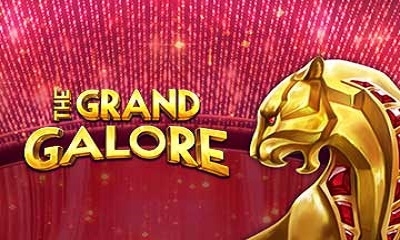 The Grand Galore online slot by ELK Studios takes players into a bit of an Art Deco style wonderland with a bit of an art gallery or fine jewelry motif. The gameplay centers around having a lot of ways to get paid on each turn with a high degree of action, and the visual style is gorgeous and fits the concept perfectly.

Casinos with The Grand Galore

An Introduction to The Grand Galore

ELK Studios’ The Grand Galore video slot brings players into a fun museum type of setting with an Art Deco style of graphics. There aren’t very many games that use this visual style, which is interesting because it’s so prevalent in other forms of media. Nevertheless, it’s an aesthetic that will appeal to the vast majority of players.

The graphics aren’t the only thing that stands out here: The gameplay is exceptional as well with a number of features that center around getting more ways to win from the regular pay table.

Elegant action is the name of the game when it comes to how this slot actually performs on a feature-based level. Instead of having flashing lights and bells and whistles going off all the time, it centers on a more understated style of action that brings you a ton of value without needing to ring alarm sirens every single time it happens.

This creates a more relaxed atmosphere, which isn’t something you often see in games that bring a whole lot of action.

The layout for this game is set up to offer a whole lot of ways to get paid on each turn. It also facilitates a set of features that makes it even easier to get paid. Here’s what to expect:

The betting options are pretty flexible in this game, especially with the automatic betting strategies, and that’s something that adds another layer to the overall gameplay. We should also note that the overall volatility is in the medium-low level, so you get more flexibility with your bet sizing than you would if it was higher as well.

The feature set for The Grand Galore online slot centers almost completely around ways to add symbols to the reels to get better chances to win. That’s in addition to more traditional features like wilds and free spins, but we’ll get into all of that in what follows.

The golden W is the wild symbol in this game, and it appears on all six reels. While it helps you to get a lot of extra wins thanks to the all ways format and the large overall size of the layout, it also gives you some pretty solid payouts on its own that come along the following lines:

These wilds might seem like a pretty standard feature to have, but the format gives them more value than what you’ll be used to.

There are multiple re-spin features in The Grand Galore video slot, and they’re all based around what happens after you get a winning combination. They work a little differently, but they all have the same idea of giving you more ways to get paid.

With the Expanding Reel Respin feature, every reel that includes a symbol for part of a win will expand with one additional symbol after each win. This will keep going on over and over until it can get up to a total of 10 rows.

With the Stacked Respin feature, you’ll have re-spinning symbols that are paired beside of each other always show matching symbols. This gives you better chances to multiply your effective wins.

Finally, we have Synced Respins. Between two and five reels will synchronize at random during a respin. This causes these parts of the reels to all land on the same symbol, which obviously drastically increases your chances of winning.

The diamond is the bonus symbol in this game. It awards you free spins based around the following:

Getting at least three of these diamond bonus symbols anywhere on the reels will activate the feature.

During the free spins bonus, there is a Grand Respin Meter that tracks the number of wins you get. When you pick up five wins, you will automatically trigger a respin with between two and five synced reels to give you better chances to win, and this works better than the normal version of the feature.

How to Win at The Grand Galore

With The Grand Galore online slot, the only real strategic decision you have to make is regarding the size of the bet that you choose. While there are built-in betting strategies available that will automatically change bet sizes based on rules that you set up ahead of time, another way to approach it is to consider the medium-low volatility and to adjust based on that.

For example, the volatility being on the lower end like this means that you’ll get lower swings on average than you would in other games, so picking a bit size that’s toward the upper end of the range you’re comfortable with can be an effective strategy. This is doubly so with the hit-rate being as high as it is, and your top wins will be larger as a result as well.

Payout Structure for The Grand Galore

Other than the wilds, there are three tiers of symbols in this game. It starts with the golden sphinx symbol that pays 30x for six of a kind. You can earn 5.4x for six of the red gem along with 4.8x for six of the purple. Six of the green or blue gems will pay out 4.2x and 3x, respectively.

From there, you have four different card rank symbols that follow the same color scheme. The red A and purple K symbols pay out 2.4x for six of a kind. Additionally, six of a kind combinations of the green Q and the blue J are worth 1.8x.

The action is completely raised up by the awesome level to which the graphics level perfectly fits the slot’s theme, and it’s all about excitement with this video slot, and that is awesome for those who need an action-oriented play style. The overall theme put on display as the centerpiece for this title is a strong launch pad for the play style and action.

The thing you will absolutely love about this slot is the extra padding that the plethora of features add to your overall winnings. Also, this slot is a perfect part of this company’s overall portfolio because of its graphics level and gameplay.