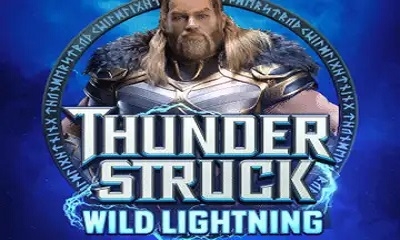 The Thunderstruck Wild Lightning online slot from Microgaming offers tons of features. Based on Thor from Norse mythology, you’ll have several styles of free spins, jackpots and other goodies in this title that’s a part of their most popular series of all time.

An Introduction to Thunderstruck Wild Lightning

The original Thunderstruck video slot was one of the first games by Microgaming to make free spins bonus rounds with multipliers popular. We can’t say how much of an impact this series has had on the industry. As such, we’re obviously excited about the Thunderstruck Wild Lightning video slot.

This game is completely crammed with features, and it has solid graphics as well.

Action is the name of the game with this slot. You’ll find that four static jackpots are available. On top of that, you’ll collect symbols to build up more value through your sessions. Several types of free spin modes can be had in this title as well. However, the regular pay table still has some really good wins available as well.

The presentation of this title is obviously taking advantage of the Thor character from the Marvel movies a bit. We say that because the presentation has a similar feel. In any event, it’s not like Marvel owns Norse mythology (yet), so it’s not going to be a big deal for most players. Either way, this game looks great, and the ability to select from multiple background songs is a cool addition also.

For the format for this game, Microgaming avoided the temptation of simply going with what’s popular. Instead, they went for an older and slightly atypical layout that still has a great degree of action. Here’s what to expect:

Despite the usage of coins, coins per line and so on, we’re going to keep things easier to understand here. All of the payouts we talk about will be based on the total amount you’ve wagered. That eliminates all confusion about how much you’re actually getting paid for wins.

Additionally, we want to point out that this game has a high volatility level. It’s not as high as a lot of progressive jackpot games. However, it’s among the highest that you’ll find without a progressive attached. That’s really saying something, and we’ll get into how to adjust to that down below.

With the Thunderstruck Wild Lightning online slot, the features are really what run the show. There are also a lot of them, so you’ll have a lot to know about before you get started. You’re obviously free to jump right in and get to it. However, we think you’ll have a more enjoyable experience if you take the time to learn about the features first.

Thor is wild in this game. He shows up in a couple of different forms. One of them takes up a single space, and another has him stacked vertically. Either way, he gives some pretty solid winning payouts:

These are also wild multipliers. Any winning combination that includes at least one wild will be multiplied by either 2x or 5x. The multiplier is chosen at random between these two options. Additionally, this wild can substitute for anything in the game other than the Thunderball symbols and the scatters.

The scatters in this game are hammer symbols. You can get some pretty good wins for these scatters, and they’re among the best in the game. Here are the scatter payouts:

It’s worth noting again that these payouts are multiples of your total bet size. However, also keep in mind that these symbols pay no matter where they located. It doesn’t matter the reels, positions or lines they land on. As long as they land anywhere on the game board, they can create winning combos.

The Link and Win feature is the key to the four jackpots shown on the Thunderstruck Wild Lightning video slot’s main screen. If you get six or more of the Thunderball symbols, then you’ll trigger this feature.

The way it works is that the Thunderball symbols that trigger the feature are held in place. From there, all other symbols are cleared, and you get more chances to get more of them. You start with three spins, and if any new Thunderballs land, that number is reset. If the game fills up with Thunderballs, or if you run out of spins without any new ones, the feature is over.

Payouts are shown on the Thunderballs as instant wins. You also have the ability to land one of the four static jackpots found in this game:

Again, these are not progressives. You’ll always win the given amount above multiplied by your total wager.

Three or more of the scatter symbols anywhere on the game board trigger free spins. However, you get multiple features to choose from. Some of them are locked when you begin and become unlocked by triggering the free spins multiple times.

You’ll get 15 free spins with this feature, and it’s available from the beginning. Wild multipliers are given of 2x, 3x or 5x for all winning combinations.

This one starts you with 12 free spins. The wild multipliers go up to 2x, 4x or 6x with these. Additionally, you can unlock this one after triggering free spins five times.

After 10 triggers of the feature, you can unlock this free spins mode. This one gives you 9 free spins with wild multipliers of 3x, 5x or 8x.

Here you start with 6 free spins. The wild multipliers are kicked up to the 5x, 8x and 12x levels.

You only get one free spin here. However, you’re guaranteed to be given the Wildstorm feature, which we’ll look at below. Essentially, you get a random number of reels turned completely wild. As many as all five of them can be forced wild for this feature.

Each time just two scatters land on the reels of the Thunderstruck Wild Lightning online slot, you’ll add one to the Wildstorm meter. When you fill it by hitting this 20 times, it guarantees a Wildstorm spin for the next free spin.

Any wilds that land on the middle three reels trigger the Wild Lightning feature during the free spins. The triggering wild electrifies that position on the reels. When another wild lands in that position during the same free spins mode, it expands to cover the entire reel.

It’s worth noting that when you start the free spins, you have a chance for random positions to be electrified. This helps to kick start this feature and get it going from the beginning.

How to Win at Thunderstruck Wild Lightning

The volatility of the Thunderstruck Wild Lightning video slot is pretty high. This means you’re going to run into some pretty serious swings. However, there is good news.

A solid betting adjustment is viable here, especially since you have so many betting increments to choose from. Going with a bet size in the range of 33 to 50 percent of what you’d normally pick is an option. The idea is that you’ll scale down your wins a bit, but that’s compensated for by how top-heavy a lot of the wins are to begin with. At the same time, you’ll dampen a lot of the swings that come from the high volatility.

You’re free to bet how you want, but this is a good betting adjustment for managing the swings.

Five different glowing stones make up the top payouts. Five of the red is worth 25x, and five of the yellow gets you 15x. You can score 12.5x or 6x for five of the green or blue, respectively. Finally, five of a kind of the purple is worth a solid 5x win.

Runes of different colors can land on the reels with card ranks on them. However, it’s the rank itself and not the color that determines wins. The various colors are just for decoration. You’ll score 3x for five of the A or K. Five of a kind combinations of the Q or J are worth 2.5x. Additionally, you can score solid 2x wins for five of the 10 or 9 symbols on a given payline.

The graphics level and visual tone of this game gives a lively tone that is competitive with some of the best that the online slots industry as a whole has to offer. If you have liked other slots that use this style of overall theme, then this is a game you won’t want to miss out on, and the feature-oriented style of play of this video slot is targeted toward bringing video slot fans a ton of action.

This game is a fitting part of this developer’s whole selection of online slots because of its graphics level and gameplay style. On top of that, a wide range of features can be found in this slot, and that is a fact you can’t assume for a lot of the slots industry as a whole.