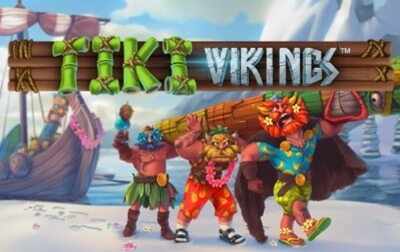 Tiki Vikings is a game produced for the Microgaming Quickfire platform exclusively by developer Just For The Win Studios. This title features a fun spin on a vikings concept with frozen symbol re-spins, symbol upgrades and lots of other features and ways to get paid.

The Tiki Vikings video slot, found at casinos that use the Microgaming Quickfire software, has a different kind of theme to it that combines a flowery type of beach scenery with the cold weather and snow that the vikings had to endure.

When you combine these two elements, you get a funny theme, and there’s nothing else quite like it in the industry as a whole.

Visually, this title looks tremendous. There’s snow falling lightly across the reels at all time, and the reels themselves are made up of the side of a tiki shack. The vikings found on the reels have more fruity appearances than you’d normally see, but they’re still angry and ready to fight anything that moves.

In this way, Just for the Win Studios was able to stay true to the viking concept without breaking too far away from the tiki aspect of the game’s concept.

The format for this title is pretty standard, and there aren’t really any surprises except for the large number of betting options that come thanks to small increments being used. Here’s an overview of what you can expect:

There’s not really much to get too worked up about over this game’s format or layout. It’s as standard as it gets, and we really like that it gets away from the line-based wagers, which can be a bit confusing for some players.

This is most definitely a feature-driven game, and you’ll find that the features are set up to trigger fairly often. This gives you more value than what the regular pay table might have you believe, and it contributes to the action-oriented experience that you would expect from a title centered around vikings.

There are eight symbols used in this game. Four of them are high-tier symbols, and the other four are card ranks. If you get a winning combination of at least three of a kind of any of the four upper-tier symbols, then you will trigger the Symbol Lock Re-spin Feature.

The way this feature works is that the symbols that create your winning combination are locked in place, or rather frozen in place, while all of the other symbols on the game board spin again. If you add new symbols to those combinations, then you will see them freeze while the feature repeats.

This feature continues until all of the spots on the reels are frozen or players have a re-spin with no new matching symbols added. When this happens, your resulting payouts will be added to your balance, and play proceeds in the usual manner.

There’s a meter on the side of the screen, and it will increase when you get larger winning combinations as a part of the Symbol Lock Re-spin feature. If that meter maxes itself out, then you’ll activate the Symbol Upgrade Feature.

The Symbol Upgrade Feature will improve the value of the symbols in the re-spin feature by one incremental level based on the regular pay table.

In short, you end up getting better payouts, on average, compared to what you normally would have received. Extra wins like this are always going to be welcome for players.

How to Win at Tiki Vikings

The key thing to understand about Tiki Vikings is that the volatility is very low, and the hit-rate is super high. The pay table is pretty flat as well, so your biggest wins are going to come from your best runs in the Symbol Lock Re-spin Feature, especially if it’s paired with the Symbol Upgrade Feature.

To this end, we suggest players get in on the action with larger bet sizes than they would normally use. We say that because the swings are going to be extremely mild compared to what you’ll find in most other games, so you don’t have to worry about a huge downswing from the mean in a short period of time.

However, it will give you better wins than you’d normally get when you activate these features, and that’s why it’s the best strategy in the Tiki Vikings video slot.

As we mentioned above, there are two tiers of payouts. The upper tier consists of the following with payouts listed for five of a kind combinations:

Keep in mind that these are not line bet wins; they are wins based on your entire bet size. As such, the 15x win for five of the Tiki Vikings symbol would be 300x if it was listed as a line bet payout, so don’t let the method of listing payouts keep you from realizing the value in these prizes.

On the lower end, you’ll find A, K, Q and J symbols that are all decorated in flowers. All four of these symbols pay 3x for five of a kind, 1.5x for four of a kind and a simple 0.8x for three of a kind.

We like what the Tiki Vikings online slot brings to the table because the concept and features are a bit different. Here are the highlights of what this game has to offer:

There are also a couple of things that some players may not like about this title:

All of that aside, we really think that the pros greatly outweigh the cons here, and we believe that the overwhelming vast majority of players will agree with that assessment.