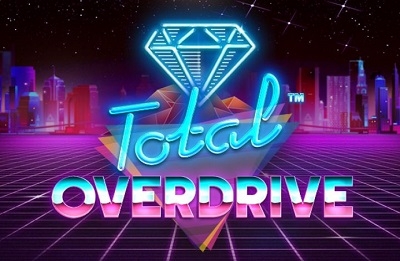 The Total Overdrive slot by Betsoft brings players into a neon-filled world that looks a lot like the old movie Tron to give you chances to beef up multipliers in more than one way and to really jack up the sizes of the payouts that you’ll be getting. This is on top of a special mode where you’re given eight free spins with even more chances for multipliers.

An Introduction to Total Overdrive

Most players, including ourselves, aren’t always the biggest fans of games that use a classic slot format. However, after looking at the Total Overdrive classic slot, we have decided that it is very clearly an exception to that rule.

It becomes a major exception in this way because of its incredible look combined with an action-oriented style of play that is more like a video slot than virtually any other three-reel title.

The look of the game is tremendous, and there’s not really any lesser way to describe it. It’s filled with neon colors and patterns on a grid in the background that could easily remind you of the old Tron movie updated for the new millennium.

The gameplay centers around ways to get extra chances to win and multipliers. These features will hit tons of different times in your sessions at the very least, and that’s why we say it’s a slot centered around a whole lot of action.

The layout for this title is set up in a classic style, even though that doesn’t necessarily match up with the style of play. In any event, here’s what you can expect:

Even though there are just five paylines in this title, the gameplay makes it play like a video slot, which gives it a sort of misleading appearance in a lot of ways. The volatility is in the low to medium range as a result of how the features keep hitting over and over while still maintaining opportunities to pick up some sizable wins.

The Total Overdrive online slot centers heavily around multiplier-based features that hit pretty often and that are built in as an integral part of the gameplay. As a result, it has a style that’s more like a video slot than most three-reel titles out there.

The overdrive multiplier is one of the most interesting features that we have ever seen Betsoft put into one of their slot titles. The way that this works is really straightforward:

When you get any kind of win on a spin, it increases the multiplier by a factor of one for the next spin.

While that sounds simple enough, the effects of this feature are a bit more complicated because they can stack over multiple spins in a row. For example, imagine you pick up a win on your first spin. The multiplier on your second win will be 2x as a result. However, if you win on that turn as well, then the multiplier increases to 3x for your third spin.

This keeps going up indefinitely. There is no built-in maximum for the size of multiplier that you can win in this way, so there’s a compounding effect that happens when you hit a winning streak of a number of turns in a row that you don’t normally see. This impacts the gameplay in a particularly serious and exciting way.

Every single time you get a winning spin, you get a random chance of hitting what they call a sticky multiplier. This will be signaled off to the right-hand side on the Total Overdrive classic slot logo with a simple number.

The way this works is that a multiplier will be held for eight spins in a row, even if you hit spins that do not have any wins. What’s more is that this feature can be re-triggered to start your eight spins over again to get even more value.

While these are paid spins, they are worth a lot more than your regular turns, so they’re essentially a different type of free spins feature that you do have to pay for but that you get a tremendous return on your play in exchange for that.

In essence, this is sort of an extension of the regular Overdrive multiplier and serves to give players a chance to win bigger payouts than they would usually win from the regular pay table in a different way.

There’s a wild symbol that’s stylized just like the Total Overdrive online slot logo. It says “WILD” instead of the name of the game, however, and it makes an appearance on every one of the reels.

We want to make it clear that this is a regular wild and not a wild multiplier, which is easy to mistakenly infer based on how many other multiplier-based features there are in this title.

If you line up three of these wilds on a payline, then you win a massive payout worth 50 times your total wager. That would be like a 250x line bet win, which is huge in a title with just five paylines.

How to Win at Total Overdrive

There are a few things to understand about this title and the way the multipliers work. First off, if you switch bet sizes in the middle of a Total Overdrive multiplier, you will lose that multiplier, so that’s something you’ll want to avoid.

It’s also worth noting that all bet sizes in this game get the same RTP percentage, so you don’t have to worry about your average payouts being different based on how much you wager.

In general, we advise that players pick a bet size that’s slightly lower than they would usually play with because this game only has five paylines. If you pair this with playing a lot faster game, either by using the spacebar or by using the autoplay feature, then you’ll smooth out the little bit of variance that this game does have and take advantage of hitting multipliers as often as possible on winning streaks.

The wild symbol is tied for the largest payout in the game with the 777 symbol. This symbol looks like it’s happening in front of a sunset, and that makes it a perfect fit for the overall theme of the game. Like the wild, it pays 50x for three of a kind as a multiple of the total bet.

From there, there is another large win of 20x for three of a kind combinations of the single lucky red seven, and then we get into the mid-range wins.

Also, if you get three bars that do not all match up, not matter which combination they are or which order they fall into, then you’ll pick up 0.2x, which really helps to increase the hit-rate and lower the volatility on the lower end of the pay schedule.

What we really like about the Total Overdrive classic slot is that Betsoft put it together in a way that it doesn’t even play like a three-reel game. The action and features are definitely what you would get out of a video slot, and the volatility is reasonable as well. Overall, if you’re primarily a video slot player, you should still check this game out to see how it fits your preferred play style because there’s a good chance that it surprises you.

Which online casinos have Total Overdrive?