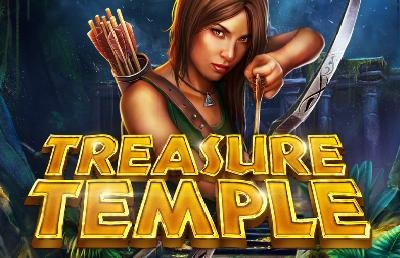 The Treasure Temple online slot by Pariplay takes you deep into the heart of the jungle where you can check out some ancient ruins and try to run up your wins in the process. With Tumbling Tiles, multipliers as high as 16x and a free spins mode, this is a game that’s obviously geared around a high level of action, excitement and adventure.

An Introduction to Treasure Temple

Pariplay’s Treasure Temple video slot is based on a jungle exploration scenario with the main character heading into some ruins to try to find hidden treasures. You’ll be right along with them, and that means you’ll have chances to add some real treasure to your account balance in the process.

This game is dominated by features that drive the action with a high hit-rate and a low volatility.

Treasure Temple is definitely designed for players who like a lot of action with plenty of small and medium wins that can be hit on a regular basis. The hit-rate is high here largely because of the combination of the format and features, all of which come together seamlessly to produce a tremendous gameplay experience.

The visual appeal of this title is strong as well. It has a stone-based visual motif that fits perfectly with the ruins concept, and none of the symbols or background were produced in anything resembling a lazy way.

The format of this game is actually key to how it plays and how the features come together to give players the experience they do. Here’s what you’ll get when you play this slot:

The volatility for this title is relatively low, and that comes from a combination of the 243 ways format and the high hit-rate it gives. However, it’s not as low as you might expect because there are a few sources of value in the game that pull value together at the top end of the pay schedule.

Something really cool about the approach Pariplay took for the Treasure Temple online slot is that it’s designed so that the format and features mesh together really well. This creates a cohesive style of play that feels like one part flows directly into the next part in a really smooth way.

The Tumbling Tiles feature is the feature that you’ll run into the most in this game. It’s a regular part of the gameplay, and there’s one simple reason why.

This feature triggers every single time that you get a win of any kind on the reels.

The way this works is that, after you’re paid normally, all of the winning combinations’ symbols crumble to allow new symbols to fall down into place. This looks nice with the stone motif for the symbols as well and the fact that these stone symbols fall from the sky into place instead of spinning more along the lines of traditional reels.

What’s more is that you’ll get multipliers for this feature as well when you get multiple tumbles on the same spin. After the first tumble, wins are multiplied by 2x for future tumbles, and this process continues until you have a tumble with no new wins. You can get multipliers as high as 7x in the regular game with this feature.

The free spins mode is activated by three of a kind of the woman with the golden frame and the quiver of arrows on her back. When you pick up three of her, she’ll give you 10 free spins.

There are two things that you’ll want to know about this feature. First, all of the multipliers are doubled for this mode, and that means that you start with a 2x multiplier that kicks up to 4x, 6x, etc. from the Tumbling Tiles feature. Second, you can re-trigger the feature to add an additional 10 free turns when you get three of this symbol on the reels once again while the free spins mode is already activated.

There is a wild scarab symbol that can appear on the game board to help you to get winning combinations. It doesn’t appear as often as wilds might in other games, largely because of the multipliers for the Tumbling Tiles feature, but it has a special effect when it does show up.

For each wild symbol that appears on the game board, you get a random chance to be taken to the Treasure Jackpot Wheel feature.

When the Treasure Jackpot Wheel feature is activated, you’ll be taken to a second screen where you’ll pick gems from the wheel until you get three of the same kind. The color of the gem you receive corresponds to the jackpot you will be awarded:

The current values of the jackpots are listed at the top of the game board during the regular game mode and free spins.

How to Win at Treasure Temple

The volatility of this game is pretty low. As a result, you can play with bet sizes that are on the larger end of what you’re comfortable with and still maintain a pretty reasonable level of swings that don’t have a significant chance of cleaning out your account balance inside of just a few sessions.

This is a smart approach because it increases the value of your wins while minimizing your risk from swings.

At the upper end of the Treasure Temple video slot’s pay table, you have a red and gold container holding glowing gems that pays out 200x for five of a kind. Five of the ancient book with a gold cover and a red gem in the center gets you a 60x win for five as well.

The mid-level symbols are next. They consist of a 100x win for five of the lamp and 40x for five of a kind combinations of the green and gold scroll symbols.

The card rank symbols are there for the bottom end of the pay table, and they have the same stone motif that fits the game so well from a visual standpoint. From the red A to the green 10 symbols, you can win from 20x to 10x for five of a kind.

Pariplay’s Treasure Temple slot uses a combination of a strong visual motif that fits with the game’s theme and a smart set of features that also fit this title’s concept to create a cohesive overall experience. What this means for the players is that everything simply makes sense and flows into the relaxing but action-oriented style of play that this game provides.

This is different than what you find with many other titles with somewhat similar themes because they will often have features or game elements that seem like they were thrown in “just because” instead of having actual relevance to the game at hand. With this title, you don’t have to deal with that type of disjointed game experience.