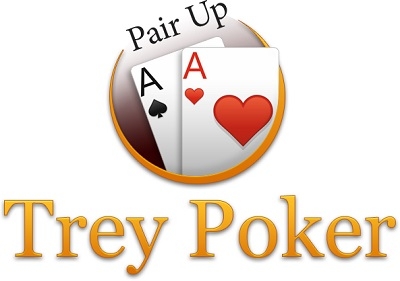 Trey Poker is a three-card poker variation produced by BGaming. It features better payouts than what you normally see in three-card poker games along with a tremendous interface and a fast-paced gameplay that keeps up with the needs of the players of the modern era of online casino games.

An Introduction to Trey Poker

There’s an abundance of casino poker games that never really get the special treatment that they deserve because they so often get lumped together and are largely ignored by a significant portion of the player base. BGaming’s work with their Trey Poker game is a giant step in the opposite direction.

They’ve achieved this by speeding up the gameplay, giving the title a more flattering presentation and increasing the payouts to be the best in the sub-genre.

Better-looking titles that pay out well are exactly the kinds of things that will get the attention of players. However, there’s something else that this game brings in particular, and that’s a choice between luck- and strategy-based play.

There are two primary betting options with this game. One of them is based on having strategic options to make, and the better you play, the better your payout rate will be. The other is purely luck-based, so you get to customize how you want your gameplay to go with Trey Poker in a way that you don’t often see with other titles.

This is a game that requires you to know a few basic things about poker before you can really get started. We’ll show you what those things are and then get into how the game itself is actually played.

You may think that you know poker rankings well enough, but in three-card poker, they are a bit different. From best to worst, this is the ranking for three-card poker hands:

The reason that the order of these hands is so much different is that it’s based on your chances of being dealt different sets of cards. With three cards in a hand, it’s much more difficult to be dealt three of a kind than a flush, for example, where the opposite would be true with five-card hands.

As far as how the game is actually played, once you know the three-card poker rankings, it’s not very difficult to understand. Here’s how things go:

Aside from the above, the Pair Up bet pays based on your initial three cards no matter what the dealer has or who wins between you and the dealer on the ante bet. The pay table for the Pair Up is as follows:

What’s really cool is that you can pick between the two wagers to play the one you want, or you can pick both at the same time. It’s completely up to you, and you’re under no obligation to play either particular bet.

There is some strategy involved for playing with the ante bet, and we’re going to cover that here. It’s not particularly complicated, and that makes Trey Poker a good game for players who may want to start getting their feet wet with some strategic play without being thrown in over their heads in the “deep end” of things.

You only need to know one piece of strategic advice with this game: Raise with Queen-Six-Four high or better, and fold with Queen-Six-Three or lower.

If you aren’t familiar with how high-card poker rankings work, here is the basic idea. If you don’t have at least a pair, then you consider your cards in order from highest to lowest. For example, if you had Q58, then you would think of them as Q-8-5 in descending order.

Your hand can be described based on the highest card (or the one on the far left when ordered correctly), so in this game, it would be Q-high.

How to Win at Trey Poker

Having the best chances of winning at this game is just about patience and having the best strategy, which we have already outlined above.

With that having been said, the two are close enough in value that you aren’t taking some massive loss if you play both. In short, the game is set up so that you don’t really get punished much for making sub-optimal decisions outside of the strategic option to fold or raise, so you’re generally going to be in decent shape with balanced odds of winning in your session no matter what as long as you don’t raise with hands lower than Q-6-3, as noted above in the strategy section.

BGaming’s Trey Poker game is something more along the lines of what we would like to see casino poker games transformed into. It’s a great-looking title with smooth play that doesn’t have unnecessary delays from hand to hand or play to play. There are better payouts, particularly with the 100x royal flush win, than what you see with other comparable titles, and the strategies aren’t difficult to learn to maximize your available payout rates.

Overall, this is a game that has some crossover appeal because it doesn’t get too deep into the strategic trenches to avoid being accessible to players who prefer titles that aren’t difficult to learn to play pretty well.

Which online casinos have Trey Poker?