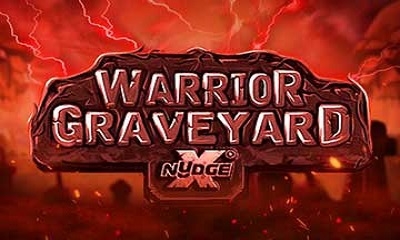 The Warrior Graveyard online slot is an extremely interesting title produced by Nolimit City. The spooky concept combines with six-reel action to bring players lots of features. The pay table is generous as well with multiple bonus features, multipliers and more.

An Introduction to Warrior Graveyard

With many online slots, you have already seen the theme that’s being used in other games. Nolimit City likes to get away from that trend, and you can see it majorly with the Warrior Graveyard video slot. The whole idea is something that we’ve never seen before, which is really saying something.

Not only is this theme different, but it plays into the format and gameplay. This includes the regular pay table and the bonus features.

On the gameplay side of things, the format is a bit larger than usual. This leads into plenty of extra ways to get paid from how the features work. However, the payline-based layout is pretty straightforward.

Overall, this is one of those games that stands out in every way. There’s not quite any other online slot like it, and that’s a pretty big deal. Everything about this video slot has been executed perfectly, and it has no weaknesses that stand out in any meaningful way.

Betting in this game is pretty cool in that the format is larger than usual, but a regular payline system is used. This makes it easy to keep up with the ways to win while also supporting a really simple bet selection setup. Additionally, the larger than typical grid gives room for extra features. Here’s what to expect:

The volatility for the Warrior Graveyard video slot is pretty reasonable. It falls somewhere between the medium-low and medium range. Additionally, the way the betting is set up makes it really easy to keep up with how much you’re wagering. That’s a big improvement over systems based on coin sizes, numbers of coins per spins, changing the number of active paylines and whatever else other options that become over-complicated very quickly.

The play style of the Warrior Graveyard online slot is a bit different. This is similar to how the theme and visuals are a bit different as well. Everything centers around taking advantage of the fact that this game has six reels. It also ties the feature set into the theme of the game, which is really cool.

On the second, third, fourth and fifth reels, you can have large tombstone wilds appear. These are stacked three spots high, and they are a part of the X Nudge feature. This is a feature found in some other Nolimit City video slots. However, here it’s all about giving you better payouts. It achieves this in two ways.

First, it’s a stacked wild that shows up on two-thirds of the reels in the game. That is going to help you out plenty in and of itself. However, that’s not all that’s going on here.

These stacked wilds always nudge to completely fill the reels if they land on the game board at all. That means that they effectively act as expanding wilds for all intents and purposes. Additionally, they increase the wild multiplier for that spin by a factor of 1x for each nudge. That means that you’ll often get a wild multiplier of 2x or 3x just depending on where these wilds land.

Several warrior symbols make up the top payouts. If you get three or more of the same warrior anywhere on the reels, then you’ll trigger the Warrior Attack bonus feature.

The symbol that triggered the feature will nudge to cover the reel. Additionally, the total multiplier for the spin will be increased with each individual nudge. From there, all of those symbols move as far to the left as they can to guarantee a lot of wins.

This is once again a very innovative feature that takes advantage of both the theme and the larger format. We love how Nolimit City brought all of these individual factors together in this way.

Three, four or five of the scattered wild scatter skull in a red helmet earns the Graveyard Spins feature. You’ll receive free spins based on the following:

During this game mode, the tombstone wild symbols will give a multiplier than adds together for the entire feature without resetting. What’s more is that this multiplier is for all wins instead of only wild-based wins. That’s a pretty tremendous amount of value to be had with this bonus feature.

If you’re able to pick up six of the scattered wilds, then you’ll be given 14 death spins. This is similar to the Graveyard Spins with one difference:

The tombstones stick in place for the remainder of the feature after they nudge to fill the reel.

The accumulative win multiplier for each nudge is still in play here. Also, each scatter that appears on the reels in any position will add an extra win with no limits during the Death Spins feature.

Additionally, you’ll be given a 6x flat payout for triggering the feature.

How to Win at Warrior Graveyard

Betting adjustments for games like the Warrior Graveyard online slot are based largely around the volatility levels. In this title, it’s close enough to average that we don’t recommend making any significant changes to your bet size. Instead, we highly suggest simply choosing a size that’s in the middle of the range that you’re comfortable with. An average bet size for you as an individual is the right choice here.

The five stacked warrior symbols each pay for three of a kind or more, like all other symbols in this game. The red pays 6x for six, and the yellow gets 5x for the same. Six of the green or blue will pay out 4x or 3.6x, and the gray pays 3.2x. As a reminder, these are all based on multiples of the total bet size.

Five more symbols with a similar theme and color scheme round things out on the lower end. The red sword and yellow shield each pay 3x for six of a kind. Likewise, you can pick up 2.8x for six of the green helmet, blue axe or purple war hammer.

The hit frequency of the features in the Warrior Graveyard video slot is so serious that players will certainly not get bored. Additionally, everything centers around action with this game, and that’s wonderful for video slot fans who need an exciting play style.

Due to the fact that this game brings a high level of quality while still standing out on its own, this online slot fits perfectly in this software company’s portfolio as a whole, and the concept put into play as the basis for this online slot is a solid springboard for the gameplay experience and fun. As if that wasn’t enough, the fun is definitely amplified by the awesome level to which the graphics level is suited for the game’s theme.