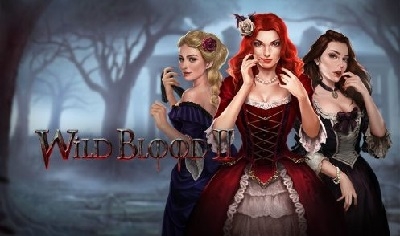 The Wild Blood II online slot is Play’n GO’s sequel to the original vampire-themed Wild Blood game. This title takes things to the extreme with lots of ways to get paid including 4,096 ways to pay on each spin along with multi-tiered bonus features and stacked wild symbols that give lots of big opportunities.

An Introduction to Wild Blood II

The whole mythology around vampires has been fascinating for human beings for a long time, and Wild Blood II is a video slot that captures this interest. Play’n GO has obviously went out of their way to separate this title from other vampire-themed slots as well, and that contributes to how well players receive it.

From the format to the feature set, there’s not much that’s typical about this title.

The visual appeal of this game is outstanding. You’ll have a background with a road going out through a dark and foggy forest that looks tremendous. The symbol sets look great as well, and even the card rank symbols have been handled with care.

The feature-oriented gameplay is something else to look forward to with a particularly high hit-rate thanks to the base format as well as a balanced pay table that’s designed to give players a low level of volatility and a very smooth experience without a lot of significant swings.

The layout for this game is one of the keys to why it works the way it does, and here’s a breakdown of how it all comes together:

As we mentioned up above, the volatility for this title is pretty low, and a big part of that is the 4,096 ways to win on each turn. This is because the hit-rate is pretty high, and you’ll get a lot of small and medium wins. It also helps that the pay table is pretty balanced as well.

The gameplay for this title is a little in-depth with some solid features that provide good amounts of value. Also, it’s worth noting that they didn’t just rely on the format with its 4,096 ways to win to provide all of the action. Instead, the features are pretty action-inducing as well.

The male vampire is the wild symbol, and he shows up to help you to get wining combinations that you would have missed out on otherwise. He appears on every reel normally, but he also appears on the sixth reel as a stacked wild that’s tied to a feature listed below.

Wins for combinations of just the wilds are as follows:

Like all of the payouts in this game, these wild combination wins are multiplied by the total bet size. Note that if you get wilds on a number of reels like this, you’ll almost always get a variety of other payouts as well since they can be used to create as many winning combinations as possible using other sets of symbols.

The vampire himself can show up as a stacked wild on the sixth reel to trigger a re-spin feature. Your payouts, if any, are given as usual on the initial spin that activates the feature.

From there, he will turn into a bat and fly himself over to cover the first reel instead.

From there, the other five reels will spin again at no cost to the player for a free opportunity to get paid. Since the entire first reel is full of wilds in this feature, you’ll get some tremendous opportunities for multi-way wins and better chances of winning overall, and that’s all at the same time.

If you get three or more of the scatter symbol, then you’ll activate a free spins mode. The scatter in the Wild Blood II online slot is a vial of blood, and it’s a glowing symbol that’s hard to miss.

Here’s what you will get depending on how many scatters you pick up:

You can get these scatters anywhere on the game board to win free turns. They don’t have to appear on any certain lines or any particular reels.

When you trigger this feature, you’ll automatically pick up a minimum win of five times your total bet size.

You get to choose from three sets of free spins. The first are for the blonde woman Laura, and her mode has wild symbols spread either up or down to give you more ways to get paid.

In the redheaded Margaret’s mode, four wilds collected increases your multiplier and adds two free spins. This leads to a multiplier worth up to 5x at a maximum.

Finally, the brunette Rebecca’s mode gives wild multipliers randomized at 2x or 3x for maximum multipliers worth up to 81x.

Our opinion is that Margaret’s mode is the most valuable, but she’s the only one of the three who doesn’t allow re-triggers for two or more scatters, which is something to consider.

How to Win at Wild Blood 2

The key to maximizing your chances of winning at this game is to think of it in terms of sessions instead of individual spins. The regular pay table is pretty balanced, so you’ll usually stay afloat or come close to staying even while you shoot for bigger payouts from the features or combinations including multiple wilds.

Keep your bet size at the size you’re typically comfortable with, or go for a size slightly larger to take advantage of the low volatility. However, we recommend not going much higher than that so that you can feel comfortable playing for longer sessions since that’s how you’ll maximize your chances of getting big amounts of value from the features.

In this game, the pay structure is set up to be really flat and balanced. It starts with the three women, which include a blonde with a green background, a brunette with a dark blue background and a redhead with a red background.

All three of these women, in addition to the wild symbol, pay 7.5x for six of a kind combinations.

The skull candle pays 6x for six, and you can earn 3x for six of the knife or A symbol. From there, things drop to 2x for the K, Q, J and 10 symbols with all of them having the same payout.

The Wild Blood 2 online slot brings players into a world that was started with the original title in the series by Play’n GO. The graphics really help to craft the feel that you get while playing, but it’s the gameplay and features that take this slot over the top in terms of giving players a tremendous experience in the greater sense.

Overall, the level of action with having 4,096 ways to win combines with a dark and serious theme to create a tremendous atmosphere centered around action.