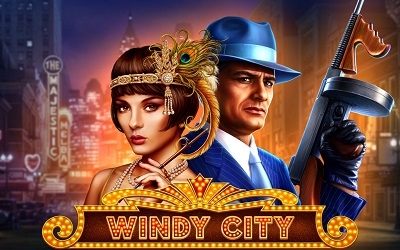 The Windy City online slot by Endorphina is centered in Chicago during the Prohibition Era of alcohol in the United States and features the gangster culture that it made infamous. Al Capone, Elliot Ness and a gorgeous woman are all characters on the reels with chances to win several times your payout with a free spins bonus round on the horizon at any time.

An Introduction to Windy City

The Prohibition Era in the United States showed what happens when you try to outlaw alcohol: It bred a culture of violence and crime that the country had never seen before or sense. The Windy City video slot captures all of the mystique of that period of time on the reels.

Two of the most famous characters are shown on the reels as well, which really reflects the history of the situation.

Visually, this is an absolutely gorgeous name. The background is a beautiful 1920s city concept with well-drawn characters and other related symbols on the game board. Even the card rank symbols look awesome with a font that’s perfect for the 1920s theme.

In terms of gameplay, this is a high hit-rate title with a free spins mode and a lot of value that comes from the regular pay table.

The betting setup for this game is made in a way that’s pretty easy to use while still giving you opportunities to customize your betting as much as possible. Here’s what to expect:

There’s no doubt that you’ll find a high level of customization with your betting, but it’s also worth noting that this game has a pretty low volatility as well. That means that you won’t have to worry about swings being so bad, and you’ll have a high hit-rate with a lot of small and medium wins from the regular pay table.

The Windy City video slot has gameplay that’s largely about the value you get from the regular pay table and from the high hit-rate. With that said, the main bonus feature does have a good amount of value associated with it by extending what you get from the usual pay table.

Al Capone is probably the most famous (or infamous) gangster of all time in the non-fiction sense, and he’s the main character here for good reason. He’s also the wild symbol and will help you to get a variety of wins that you would have missed out on without him helping out.

This symbol also appears on all five reels and gives you payouts based solely on wild combinations. Here are the wins you can pick up with these Al Capone wilds:

There are two things to know here. First, these wins (like all wins mentioned) are multiples of your entire bet size. If you would like to know what the line-based win would be, simply multiply these numbers by 10.

Second, if you have a winning combination of wilds, but those wilds could be used to make a better-paying combination using other symbols on the same payline, then you will always be paid the larger win. In fact, each payline is evaluated individually from left to right, and you will be given the single-largest payout that you can eligible for on each of those lines.

These wilds also do not substitute for scattered car bonus symbols.

The car symbols appear on the first, third and fifth reels only, and they are scattered bonus symbols.

When you pick up all three of these cars on the game board at once, then you will be taken into a free spins bonus feature.

This feature always gives you 10 free spins with no chance to re-trigger, but that’s not because the cars are missing. Instead, during the Windy City online slot’s bonus mode, you’ll have extra wilds as those cars will substitute for anything. This means that the free spins are worth more than the usual spins in the regular game mode.

Unlike most titles, you will need to pay attention to the gamble feature in this game. This is because it can actually help you to improve your payout rate since it works in an atypical way.

After any win, you’re given a chance to view the gamble feature. This has one card face-up with four other cards face-down, and if you pick a card that’s higher than the one showing, then you double the amount of your payout.

The catch here is that you aren’t forced to actually play the double or nothing bonus feature just because you’ve viewed the cards.

That means that you should always view the feature but only play it when you have an advantage. Because the cards aren’t actually from a virtual deck and instead are based on a weighted RNG, you will always have an advantage over the house if you play the gamble feature when a two, three four or five is showing.

Likewise, if you play with a six, seven or eight showing, the result will always be break even with zero house advantage. However, playing with a nine through ace (aces are always high in this feature) will result in losing value.

How to Win at Windy City

In the Windy City video slot, there are a couple of decisions that you need to make in order to get the best payout rate available. Failure to do both of these things will hurt your payout rate and increase the house advantage substantially in this game.

The first thing you need to do is always play with ten paylines activated. While you can play with fewer, it will lower the RTP percentage, which means that you’ll have a higher chance of losing.

The second thing is to always view the gamble feature, and always play it when you see a two through five. Playing with a six through eight is optional if you want to increase the game’s variance a bit, but it won’t hurt you to skip it in those cases either.

The pay structure for this game past the wild symbol is fairly flat. The woman on the gold background gets 10x for five of a kind combinations, and you can also earn 5x for five of the man in blue with the gun. The case of liquor is worth 2.5x for five of a kind as well. All three of these symbols in addition to the wild pay for just two of a kind, and the card rank symbols below require a minimum of three symbols for a win.

The purple A, orange K and yellow Q get you 1.5x for five each. Five of a kind combos of the blue J or red 10 will earn you 1x.

The gameplay for the Windy City online slot is based more around the value from the regular pay table than a bunch of extra features, which gives it a style of play that appeals to a certain demographic. It’s not going to be a favorite game for everyone, but it has enough that it will appeal to a fairly wide range of players, and that includes people who really just love the look and feel that it brings to the table.