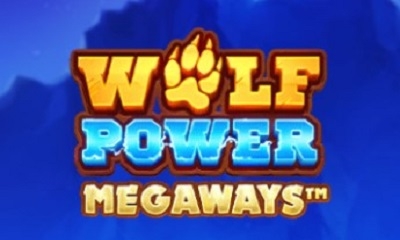 If you’re ready for an adventure in the North American wilderness, then the Wolf Power Megaways online slot is waiting for you. This title offers hundreds or thousands of ways to win on each turn along with atypically large scatter payouts, wild wins and multiple bonus rounds.

An Introduction to the Wolf Power Megaways Slot

Playson slots know how to come out swinging when it comes to giving players a great experience. This is exactly what we have found with their Wolf Power Megaways video slot. They’ve used the Megaways format to a different effect than what we usually see.

When you add that into the excellent North American wilderness theme, it creates an awesome time for players.

Visually, the first thing that stood out to us was actually the background. It has a spooky but also mystical blue tint to it as you see a full moon rise up above rolling blue mountains. From there, we noticed the tremendous detail that went into the various animals shown on the reels. Additionally, the dark blue background on those reels goes with the surrounding setting super well.

Sometimes we see certain providers push out games with the Megaways format who just rely on it more or less by itself for the gameplay portion of the equation. We don’t get that at all with this slot, and instead, we get an incredible lineup of features. However, these game mechanics are slightly atypical in some cases, so you may experience a slight learning curve. In any case, it’s not a difficult game to learn, but you will want to read up a bit before starting.

A good place to start is learning the format. While it does fall under the Megaways heading, it’s a bit more restrictive with the number of symbols showing. Subsequently, you’ll have fewer ways to win on average. Here’s what you’ll want to know before jumping in:

The volatility level for this title is around average. While the features and scatter wins would otherwise drive the volatility and swings up a bit, the super balanced pay table combined with the higher than average hit-rate temper things back down. The end result is a pretty smooth experience with some swings but nothing particularly strong on average.

Every win in this game, including the scatter payouts over the top of the reels, are based on your total bet size. For example, if you’re wagering €5 per turn and win a 6x prize, your payout is €30. This is the easiest way to make it clear what you’re actually winning, and we’re glad that Playson used it.

Gameplay and Features of the Wolf Power Megaways Video Slot

When we were looking at the gameplay of this game, we were reminded a lot of the Howling Wolves Megaways slot due to the combination of the theme and the Megaways format. However, the Wolf Power Megaways game is different in a few key ways. Overall, this title relies a bit less on the Megaways format as a crutch and offers more features on its own. We’ll detail those features in the following.

We don’t know that it’s the most important symbol in this entire game, but the wild wolf symbol is really important here nonetheless. To start things off, it appears on all six reels. Subsequently, this leads to it having strong payouts on its own:

What you’ll notice here is that it pays for just two of a kind. This is one of the elements that add to the hit-rate, which helps to keep the volatility down.

Additionally, this wild does not substitute for the bonus or scatter symbols. With that said, you’ll find that the wild is not quite as centric to the gameplay as what you find in the Book of Wolves game with its combination scatter/wild symbol. Regardless, it’s still pretty critical, and you’ll always be happy to see it on the screen in any capacity.

One symbol you’ll see is a full moon behind a mountain peak. This is the scatter, and Playson made it easier to see by wrapping it in a golden frame. In any event, this symbol also appears on every reel, and it’s the key to triggering the Wolf Power Megaways free spins mode. However, the number of free turns you get is dependent on the number of scatters used to trigger the feature:

Two things stand out that we think players should know about this feature. First off, you can add more free spins to your total by getting three or more scatters. The total added is the same as the above listing. Second, the wild wolf symbols become expanding wilds during this mode. Those wilds will always expand to take up every position on its reel when it lands. Note that if it covers up a scatter or bonus symbol, it will still count for the purposes of prizes.

You can see two different symbols that look like golden circles on the reels in this game. The bonus symbol is a glowing ball, and the power symbol looks like a golden ball with a wolf howling on it. When you get six or more of them total, then you trigger the Wolf Power online slot bonus feature.

All of the bonus and power symbols will stay in place and remain sticky for the rest of the feature. However, all other symbols fall away. Players start with three re-spins, and you are trying to get new bonus or power symbols to land. When at least one of either does, the re-spin number starts back over at three, and the process continues.

Payouts are given in this feature in two different ways. First off, the bonus symbols each give a random payout worth as much as 10 times your total bet size. However, the power symbols pay according to a scatter pay table. A portion of this table is listed above the reels on every spin.

Note that the reels can expand in size as well, which gives you more screen real estate to pick up these symbols. Additionally, these power symbols only pay out at the end of the bonus feature.

How to Win at Wolf Power Megaways

In the regular game mode, you have a medium volatility. Subsequently, you don’t need to worry about making any real betting adjustments. Additionally, the swings will be about average, which we find to be suitable for most players.

However, you also have the option to buy the bonus feature. Note that this is not the free spins mode; it’s the re-spin feature instead. Doing so costs you 100 times your starting bet size, and it forces the next turn to have at least six of the qualifying symbols to start the feature.

The key thing to understand about exercising this option is that it increases the volatility substantially. As a result, we strongly suggest using a much lower base bet size than you normally would.

A handful of animals known for being found in the North American wilderness are found in this game, which is a similar set of animals as what was used in the Wolf Call slot if you’re looking for something with the same kind of presentation. Here it starts off with a 20x win for six of the bear and drops down to 15x for six of the eagle. You can also earn 10x for six of a kind combinations of the ram or 5x for six of the owl.

Playson made the lower level wins really easy to remember because they’re all the same. For the yellow A, red K, green Q and blue J, you can pick up 1x for six of a kind combinations of each.

A lot of Megaways slots are out there these days, but the Wolf Power Megaways online slot handles things a bit differently than most. For one, the size of the reels is dropped down slightly. In most of them, you can have up to seven (sometimes more) symbols on each reel. However, here the maximum is dropped to six instead.

We find that this helps the gameplay to focus a bit more on the features instead of using the format as a crutch. In the case of this particular slot, it leads to a game packed with bonus rounds and extra ways to win, and we love it.

What is the Return to Player (RTP) for Wolf Power Megaways?