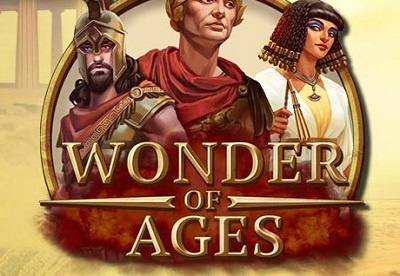 The Wonder of Ages video slot by Blueprint Gaming has a great theme based around lots of different empires that occurred back through time. This is a feature-oriented game that has several different bonus features and ways to win on top of a value-centric pay table to gives good wins at the upper, middle and lower portions of the pay schedule.

An Introduction to Wonder of Ages

The Wonder of Ages online slot by Blueprint Gaming is very clearly styled after the concept of the original Age of Empires video game, which had to do with different empires warring with each other.

While there is no tie-in by name, the graphical style and the style of the logo look almost exactly like what the original AoE video game brought to the table.

Along these lines, this is a title that looks great. You have different characters from different cultures on the reels giving you a variety of ways to get paid, and that’s on top of the numerous bonus features that give you even more ways to win.

The style of this title shows that Blueprint Gaming knows how to put together a game with a lot of action, and if that’s the style that you enjoy, then this could very easily become one of your newest favorites.

The layout of this game is really easy to get used to, and they made it as straightforward as they could so that players could just hop in and get started. Here’s what to expect:

All wins in this game are multiplied by the line bet value, and you can find that value by dividing your total bet size by a factor of 20. Along similar lines, if you’d like to know what a payout would be as a multiple of your entire wager, then you can divide that number by 20 as well.

The feature set of the Wonder of Ages online slot creates a play style that may remind some players of earlier days of video slots where free spins and bonus features that gave value directly were more common. However, Blueprint Gaming has brought things up to date for the modern era and avoided some of the problems that the older style of games posed for many.

The main wild symbol for this game is a “W” with a crown around it, and it shows up on all five reels. It will substitute for everything but the logo scatter, and it will also give players some pretty serious payouts along the following lines:

Some players wonder what happens if they make a winning combination of wilds but the wilds could be used as a part of a combo that pays even better. Blueprint Gaming uses the fairest system possible for this: Each individual payline has its single best payout given to players to avoid any kind of problems with this.

The Wonder of Ages video slot logo symbol is the scatter. Like the wild, it appears on every reel, and it’s the only symbol the wild doesn’t substitute for.

You can get wins based on multiples of your total bet size with this symbol:

This top win for five is like a 2,000x line bet win in size, so that’s pretty notable as one of the largest wins in the game.

When you get at least three of the scatters anywhere on the game board, you’re given a shot at the Wonder of Ages bonus feature.

In this feature, you’ll pick coins to randomly choose one of four different bonus rounds. This is essentially given at random.

This bonus feature essentially gives you a random choice of free spins with extra types of wilds and multipliers added on, but other than that, it’s a pretty standard feature that also gives you opportunities to get instant payouts from the coin-choosing game.

This game is a part of the Jackpot King progressive jackpot line by Blueprint Gaming. Essentially, you can win a random chance at a progressive on every single paid spin. Your chances of winning scale upward with the size of your wager to keep things fair for all players, but you can qualify for this with bets that are as low as €0.20 apiece.

It’s worth nothing that there isn’t as much variance added to this game from the jackpot than what you might see with many other progressives. A bit part of that is that the jackpot is tied to so many different titles, and it isn’t a key feature of this particular slot. Instead, it’s more of a side feature.

How to Win at Wonder of Ages

The volatility for this game isn’t particularly high, but it’s not so low that we’d recommend changing your bet size to compensate for the low swings. Instead, we think that the best option for this game is for players to choose a wager size that’s in the mid-range for the overall spread of bet sizes that they’d typically be comfortable with.

Payout Structure for Wonder of Ages

The pay structure for the Wonder of Ages online slot centers primarily around the cast of characters. Caesar gets you 1,000x for five, and five of Cleopatra is worth a solid 500x payout. You can also win 300x for five of the Spartan in the helmet or five of the Egyptian pharaoh. Likewise, 250x wins are available for five of the man in the red crown or the Mongolian rider.

Any combination of five mismatched characters will get you a 200x win if none of them are the same. A 200x win is yours for five of the urn as well. From there, things drop down to the Roman number symbols where the I, II and III symbols each give you payouts worth 100x.

What Blueprint Gaming has done with their Wonder of Ages video slot is tremendous. It’s got a ton of action with a great theme and a visual appeal that’s up there with the best that the industry has to offer.

As if that wasn’t enough, it’s tied in to a progressive jackpot link as well.

One of the things that really stands out to us about this game is how centered it is around the cast of characters. Those characters are the majority of what you see on the reels, and they fit the theme perfectly. On top of that, you can get wins with combinations of them even if they don’t match.

Overall, this slot has been developed in a way that it’ll appeal to a fairly wide audience, and that’s taking into account everything from the theme and concept to the level of action and play style.