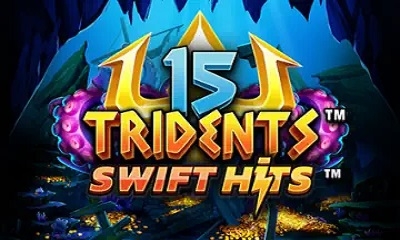 The 15 Tridents online slot from Microgaming via PearFiction Studios takes players into the underwater world of Poseidon. You’ll see various characters from his aspects of Greek mythology as well as a dual set of reels with scatter pays that can win across both grids of symbols.

An Introduction to the 15 Tridents Slot

Something that players often wish for is an atypical setup that is different without going too far “outside of the box.” Microgaming slots have done this more than most, and their 15 Tridents video slot is a great example. Here you’ll have two sets of reels, but certain ways to win can pay across the entire extended game board.

This really matches the reach of Poseidon, which is a key element of his stories from Greek mythology.

Visually, we have a lot going on in this title. You have excellent detailed depictions of Poseidon, his wife and a variety of other figures that appear in his tales. Additionally, the underwater scene is super colorful and comes alive with bright treasure. Overall, it’s a cool deviation from what we see from many other similarly themed slots like Poseidon’s Rising that can take itself just a little too seriously.

With that said, the gameplay is where this title ultimately shines because it’s what the whole slot is really built around. Players have lots of ways to win on the reels, but that’s made even more impressive by having two sets of reels to win on in the first place. Microgaming added in different ways to get paid with this atypical layout as well, which is where the name of the game itself comes from. Overall, they were able to tie in the theme and gameplay together with each other in ways that create a really immersive experience.

The layout of this game is very atypical, which is actually the focus of the slot as a whole. It can seem intimidating when you first look at it, but it’s actually really easy to learn. Here’s what you need to know before you jump in and start playing.

Due to the double set of reels and the high number of ways to win, this game has a pretty high hit-rate overall. Additionally, this contributes to a reasonable volatility that comes in just slightly above-average. If it wasn’t for the top-heavy trident wins, it would probably be average or even lower.

Something Microgaming did to make this game easier to deal with is how they set up the payouts. They’re all listed out based on a multiple of the amount you’re wagering as a whole. Additionally, this makes it easier than if they tried to use some coin-based system that just gets really over-complicated really quickly.

Gameplay and Features for the 15 Tridents Video Slot

The name of the 15 Tridents online slot comes from a very important feature that we’ll get into below. This takes advantage of the dual set of reels. However, other features are available in this title as well. It all comes together to form up an exciting style of play that a lot of different types of people can enjoy.

The very first feature we want to look at is the extended scatter. This is the trident symbol from the name of the title. However, it works differently than most scatters. That’s because it can pay across all of the reels at the same time with up to 15 of them landing at once. Subsequently, this means more than one can land at a time on certain reels.

As you can see, these wins may start off somewhat small. However, they’re easier to get on the 10-reel format than what otherwise might be the case. With that said, they get absolutely huge toward the upper end of things at the same time.

Another important feature of the 15 Tridents video slot is the wild clam multiplier. Wilds can appear anywhere on either of the reel sets. Subsequently, they offer the following payouts:

These clams also offer multipliers worth 2x, 3x or 5x. When more than one of them are a part of the same winning combination, those values multiply by each other to determine the total overall multiplier.

Some random features can happen on any given regular or free spin in this game.

Poseidon’s Favour will add random trident symbols to the board when it triggers. This makes it easier to get payouts from the trident scatters.

Amphitrite’s Blessing is based on the wife of the sea god, and she awards you with one or more extra wilds. However, she can also increase the multipliers of existing wilds for chances at even better payouts.

Siren’s Call can add high value symbols to the board to force wins of some type. Again, this is just another way to add extra payouts.

The eye of the Kraken is the scattered bonus symbol. On each reel set, it appears on the first, middle and last reels only. However, the number of scatters across both sets combined are what determine the number of free spins you’re given:

During the free spins mode, each individual scatter adds an extra free spins. However, they cannot re-trigger in the traditional sense. Also, these symbols never offer payouts.

How to Win at 15 Tridents

The numerous ways to win in this title offer a pretty reasonable volatility that’s perhaps slightly over the medium level. We don’t know that this is enough to warrant a betting adjustment for all players. However, if you really don’t like a lot of big swings at all, you may want to drop things down one betting level or so.

Overall, outside of that, you don’t really have much that you need to worry about. Simply pick out a bet size that fits what you’re comfortable with, and have at it.

The pay rate of the bonus features in the 15 Tridents slot is serious enough that players will certainly not get bored of playing. The feature-oriented play style of this title is centered around bringing players a whole lot of action, especially with the tridents across 10 reels. Due to the fact that this game offers a high degree of quality while still standing out as an individual entry within the genre, this is a slot that fits perfectly in Microgaming’s portfolio overall.

Which online casinos have 15 Tridents?

What is the Return to Player (RTP) for 15 Tridents?