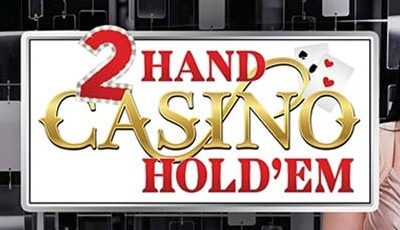 Evolution Gaming’s 2 Hand Hold’em live dealer game gives you double the action as you can play two hands at the same time against the house in a version of the most popular poker game running on the planet. The bonus side bet can also give you an extra chance to win up to 100 times your bet with a minimum payout of 7x.

An Introduction to 2 Hand Casino Hold’em

Since the late 1990s and early 2000s, Texas hold’em has taken over as the most popular form of poker there is by far. Evolution Gaming has taken advantage of this with their 2 Hand Hold’em live dealer tables.

This game offers double the action and some serious strategic changes compared to the traditional Casino Hold’em title.

We’ve seen this developer put together live dealer versions of games that are a bit different than their traditional forms, and this is another example of that particular approach. You can consider this an upgraded version of one of the most popular casino poker forms of all time as well, and it’s hard to argue that it’s one of the most interesting non-blackjack games from a strategic standpoint as well.

If you like poker, and if you like strategy and skill coming into play, then this is a game to check out.

You’ll see that there are two hands being dealt on the table for this game, and you have an opportunity to bet on just one of them or both of them. It’s your choice which of the two spots you bet with.

From there, you’ll have the following gameplay procedure for the Two Hand Hold’em tables, which apply to each individual hand:

While this is the basic procedure, note that each of your two hands will be evaluated individually based on the following rules and will be subject to their own payouts. Note also that the bonus bet is always active no matter if you win or lose the hand, so you can get a payout regardless even if you fold your hand for the ante, if the dealer doesn’t qualify or if you lose the hand after the dealer does qualify.

How Hands Are Evaluated

In most table poker games, hands are evaluated using five cards only. Here, each hand (including the dealer’s hand) is evaluated using the hold’em community card system.

This means that each hand is evaluated using the best possible five-card poker hand between the two private hole cards and the five community cards.

You are forced to have the best possible hand of the seven available, and you don’t have to declare your own hands since it’s done for you automatically. That means you won’t run into a situation like you can in regular poker where you accidentally under-declare your hand and end up with a worse hand effectively than what you could have had based on your cards.

In the following, we have the payouts and prizes based on the ante and bonus payouts. In the parentheses, we’ll list the ante payouts first and the bonus payouts second.

* For the bonus bet, the only pair that gives a payout is a pair of aces.

What you’ll see is that the bonus bet has winnings that are stacked a big toward the upper end of the pay table while the payouts for the ante win are a bit more spread out. That has an important affect on the volatility and the fact that the ante bet has a lower volatility than the bonus bet.

The strategic side of this game is one of the main reasons so many people enjoy it. There are a few factors here to consider, and while an in-depth strategic breakdown is a bit beyond the scope of what we’re looking at here, we’ll give you some basics:

In short, if you have at least two cards that are higher than the cards on the board, any pair that includes at least one of your hole cards, a straight draw or a flush draw, then you should always call. There are a number of other types of situations where calling is a must, but this covers a lot of them.

How to Win at Two Hand Hold’em

The bonus bet always has a payout rate of about 93.7 percent. That doesn’t change at any point because you don’t have any decisions that affect it.

With correct play, you can get a payout rate of more than 99 percent with the main ante wager. However, there’s a lot of strategy that goes into that, and your actual average payout rate will depend on a combination of luck and how many strategic mistakes you make in your play.

There’s really only one decision in this game, which is to call or fold after the hole cards and three community cards have been dealt. What you need to do is use the information in front of you to make the best decision you can on that particular front, but also understand that you will need to be calling a majority of the time (at least 70 percent of the time as a general minimum) to come anywhere near playing correctly.

This is anti-intuitive, especially if you’ve played poker against other people before, because the strategy that most people tend to go with is very conservative and only includes 20 to 25 percent of hands at the most.

Live dealer 2 Hand Hold’em is an excellent game for both recreational and more serious players. It includes enough strategy for it to be an interesting component of the experience, but it’s set up so that you don’t have to play perfectly to have a decent payout rate and a really good time. Add that to the social interactions of talking about hands with other players that you meet from all across, the globe, and you have a winning recipe to say the least.