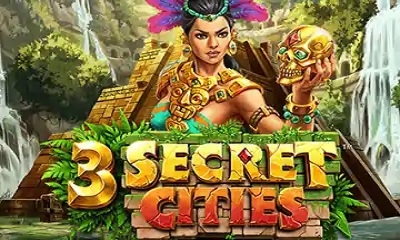 The 3 Secret Cities video slot from Relax Gaming offers players a lot of features. You can discover new cities for different levels of payouts. There are also free spins and a number of other ways to get paid in this title.

An Introduction to 3 Secret Cities

Something we really like is when a video slot gives you things to unlock and find. With the 3 Secret Cities online slot, you’ll get just that. Players are given the ability to unlock other play locations on top of other features.

This means that this title is best played with the longer term in mind.

The gameplay is top-notch with the feature set that’s available. However, the regular pay table offers a strong amount of value as well. It’s a good balance between the two that you get here with plenty of ways to earn sizable wins.

Visually, this is a great game as well. The presentation is something that Relax Gaming clearly took very seriously. Being off in the jungle while trying to discover secret cities is obviously the theme of the game. However, when it’s taken to this level, it looks and feels absolutely amazing. We love the graphics, soundtrack and overall way this game is presented to players.

The format of this game is set up in a way that it handles the volatility really well. With so many ways to win and so much value in the features, a solid layout was needed. Here’s what you can expect:

The volatility of this game is in the medium-high range. It’s definitely pretty high for a non-progressive jackpot slot. However, it’s because of all of the tremendous features and the value that comes from them. The hit-rate is in the medium range, however, which means you shouldn’t have too may long winless streaks.

With the 3 Secret Cities online slot, you’ll have a number of different features available. It’s important that you know what the features are before jumping in to play in this title. That’s because such a large amount of value comes from the features that you’ll want to know what you’re getting into when one of them triggers.

The wild symbol is a golden coin with a face on it with glowing red fiery eyes. This symbol appears on each of the reels, and it helps you to get extra payouts. However, it will not substitute for the scattered free spins symbol.

These symbols have their own payout for five of a kind, which is 5x. However, that’s the only wild-specific combination win used in this game.

The Bonus Up Feature is what allows you to discover new cities in this game. This all happens on a map with different stages between and different prize levels for getting there. You’ll trigger this as you play through the game, and we’ll get into how you progress below.

However, understand that this is a key feature mechanic that takes a while to get. Along these lines, you’ll have an incentive to play with longer sessions and to stick with this game on and off over the long run. The more you put in, the more you get chances to get rewards from advancing to the other cities. This is one reason why we suggest using a smaller bet size than usual in this title. However, we’ll get more into that later.

Scattered free spins symbols make an appearance on the first, third and fifth reels only. Getting all three of them will trigger a set of free spins. However, they also award one of two different extra prizes:

When you get these three scatters, you’re taken to the Temple Pick screen. You essentially pick one spot from the ones available starting from the bottom. This will give you numbers of free spins, multipliers, super stacked symbols and more. Overall, these all combine to give you more ways to get paid from the bonus feature.

It’s worth noting that you can add extra free spins to your total. If you get scatters on the first and last reels during the free spins mode, you’ll get a random number. These are added to your already existing free spins. Between five and 10 free spins will be added as a result.

How to Win at 3 Secret Cities

The volatility of the 3 Secret Cities video slot is way above average. We’d put it squarely in the medium-high range. That in and of itself suggests picking a smaller bet size than you would typically use on average. We think that a decrease of about 33 to 50 percent is sufficient.

However, there’s another reason to choose smaller bet sizes in this game. That’s because you’re very much rewarded for your progress on the map. This takes a bit of play to achieve, so we really recommend using that smaller bet size so that you can make sure you have enough of an account balance to stay in it long enough to trigger the extra locations.

At the upper end of the pay table, you’ll have two stacked symbol. They’re the two women on each side of the game. The golden woman holding the golden skull gets you 5x for five of a kind. The woman with the machete in the jungle holding a map is worth 4x for five. Both of these are stacked four symbols high, which makes it much easier to get multi-line wins.

Just below that is the black panther symbol. This pays 3x for five of a kind combinations. Together with the two women symbols, these are the only three symbols in the game to pay for just two. All other symbols require winning combinations of at least three symbols for a win.

In the middle of the pay table are two symbols that pay 2.5x for five. Those are the ceremonial necklace and the golden snake. Things drop slightly to 2x for five of the A symbols. Finally, five of the K or Q symbols will get you 1.5x, and five of the J or Q are worth 1x.

Something slot players will really love about the 3 Secret Cities online slot is the value that the selection of features add to your account balance. On top of that, the presentation and aesthetic appeal of this video slot gives a lively look that’s comparable with some of the best that the industry as a whole has to offer.

Additionally, as a part of this company’s offering of titles overall, this is a game that serves an important job because it is a strong fit to a whole lot of people. The play style is something that is action-centric with a ton of ways to win, and the driving theme used as the center for this online slot is a strong springboard for the gameplay experience and action.