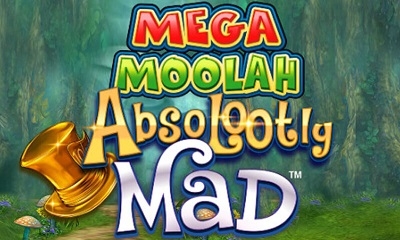 The Absolootly Mad Mega Moolah online slot is loosely based on the Through the Looking-Glass novels, including its more well-known prequel Alice’s Adventures in Wonderland. Players can win a minimum of €1,000,000 thanks to the Mega Moolah jackpot as well as free spins, multipliers and more.

When you first bring up the Absolootly Mad Mega Moolah video slot, you’ll notice that the background is a purple-on-purple chessboard with cards and clocks and butterflies all over the place. That alone could clue you into what the theme is since it’s based on Alice’s Adventures in Wonderland and the sequel Through the Looking-Glass.

This game really brings the characters and concepts of these novels to life with a visual presentation that’s up there with the best that the industry has to offer.

We can’t say enough about how great this game looks. It fits the theme perfectly, and even the low-tier card suit symbols are handled in a way that look tremendous.

In terms of gameplay, you won’t have to worry about going too far down the rabbit hole, so to speak. Everything is set up to offer a high hit-rate and a good amount of action without it getting too crazy. It’s a good balance between hitting often enough to keep the action going non-stop while still offering chances for some pretty huge payouts thanks to the tie-in with the Mega Moolah progressive jackpots.

One of the things that makes this game easy to jump right into and start playing is that the layout is pretty familiar while still facilitating the action and reasonably high hit-rate for such a big progressive. Here’s what to expect:

The volatility of this game is pretty substantial because of the progressive jackpots. However, the hit-rate is pretty solid with the 243 ways format and the way the features work. It’s going to be something that you’ll want to adjust to by lowering your bet size a bit, but we’ll get into that down below.

With the Absolootly Mad Mega Moolah online slot, the feature set is pretty cool because it offers a fair amount of other ways to get serious action outside of the progressives. We often see progressive slots offer up little other than the big jackpot, but that’s not the case here, and there’s plenty to get excited about.

The Rolling Reels feature is used in this game, which is Microgaming’s version of an avalanche-style feature. Essentially, when you get a win, it is paid normally. However, after it’s paid, the winning symbols disappear to allow new symbols to fall down into the space left behind. This gives you another free opportunity to pick up wins, and the whole thing can happen over and over again until you have no new wins available.

Multipliers are offered in this game for each Rolling Reels trigger during a paid spin. The multiplier increases to 2x for the first time, 3x for the second and 5x for every time after that. This leads to some pretty substantial increases in the sizes of your wins with this feature.

The gold coin with a hat on it is the wild symbol in this game. While it substitutes for every symbol in the game, it also only appears on the middle three reels. In any event, with the all ways format in place, this means that it gives plenty of opportunities to get payouts that you would have otherwise missed out on, so it’s worth getting excited about.

The magical door is the free spins symbol, and three of them on the board gives you a free spins bonus round. Wilds can count for these, making it easier to get into this feature.

You’ll have eight free spins, and they can be re-triggered to add eight more each time you get at least three of them on the game board. There’s not much that’s special about this spins other than they don’t cost you anything, which is always welcomed.

Each spin, the number of wilds that show up (including those that disappear because of the Rolling Reels) increases your chances of triggering the progressive feature. When you get to this feature, you’ll spin a wheel that guarantees one of the four progressive Mega Moolah jackpots. In the Absolootly Mad Mega Moolah video slot, the top prize is €1 million at a minimum, and can reach pretty high on up into the eight figure range if no one has won it in a while.

How to Win at Absolootly Mad Mega Moolah

The key to maximizing your experience in this game is to adjust your bet size to account for the huge volatility. If you have a given range of bet sizes that you’re typically comfortable with, we suggest using a size that’s between 50 and 80 percent of the average size that you’d be comfortable with.

This allows you to play faster or longer sessions to get in the same total amount in wagers without the swings having such an opportunity to completely wipe you out.

At the lower end of the pay table, you have the red spade that gives 2.4x for five of a kind. Five of the green heart gets you 2x, and 1.6x is yours for five of the blue club. Finally, the orange diamond gets you 0.8x when you line up five.

Keep in mind that these wins are multiplied by your total bet size. During the free spins, the same bet size will be used that triggered the feature in the first place.

The presentation of this video slot is top-notch and boosts the whole gameplay style, and what slot fans will absolutely enjoy about this title is the extra padding that the range of features add to your account balance. As a portion of this developer’s portfolio overall, this is a video slot that holds a critical job since it appeals to a lot of players.

In comparison to other video slots that use related concepts, this title differentiates itself in a number of ways instead of just being one of the sub-genre. Additionally, if fun is exactly what you’re looking for in your slots, then you’ll 100 percent fall in love with the gameplay style that this video slot gives to the table.