Age of the Gods: Apollo Power 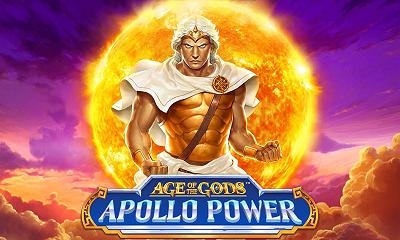 Playtech’s Age of the Gods: Apollo Power progressive slot gives you chances to win six figures on any given spin. This six-reel title also offers multiple wilds and a special re-spin feature that allows extra trailed wilds to appear on the screen to give you even more opportunities to get paid than the regular game mode.

Casinos with Age of the Gods: Apollo Power

An Introduction to Age of the Gods: Apollo Power

The Age of the Gods series by Playtech was created to take over from a now defunct set of progressive jackpot titles based on the Marvel comic book characters. They definitely had a high standard to live up to, and you can see that with how well the Age of the Gods: Apollo Power online slot looks and plays.

If you’re looking for a game with a strong aesthetic appeal, smooth gameplay and chances to give you a life-changing sum of money no matter how much you wager, then this is a title you’ll love.

At the most basic level, this game centers around Apollo, one of the most important Greek gods. He’s the god of the Sun primarily but also of music, healing and archery. The sun motif is what’s focused on the most for this game, which can easily be seen from the graphics chosen for certain symbols.

Apollo is a major player in Greek mythology, so Playtech honored the importance of his stories with a larger than usual format and tons of ways to get paid on each turn. You can see that with the following layout:

The volatility of this game is pretty high because of the combination of the features, the pay table and the progressive slots, so make sure that you’re prepared for that when you sit down to play. Thankfully, Playtech made this game in a way that allows players to enjoy it at all stakes, so there’s no issue with anyone being unable to play due to any minimum bet size issues.

The features of this title are set up in a way that they concentrate a lot of value into a narrow amount of time. As a result, they help to increase the volatility, and that contributes to the overall style of play that Playtech was going for in this game.

Players will notice two different wild symbols in this game. They both have a gold and red sun-like motif, which ties into the Apollo references we noted earlier.

The wilds in the Age of the Gods: Apollo Power video slot pay out as follows no matter what kind of combination they create of the two in any order:

One of the wilds says “Wild” and is only a wild symbol. The other has a sun shape in front of a white circle border with a large golden W on a red background, and it doubles as a bonus symbol for a feature that we’ll look at below.

If you get any of the W wild symbols on the game board, then you’ll trigger the Apollo Power Re-spin Feature. After paying out any winning combinations normally, the sun symbols will move one position in a random direction.

This path the sun makes will come back around to the original position of the W sun symbol to end the feature after a number of turns.

These turns are all free, but each position that the sun lands in will turn wild for the remainder of the feature. This is a really cool spin on a type of feature that has been done before in a lot of games, but we’ve never seen something quite like this done before. It’s especially interesting because it really plays into the sun motif of the game, which is something we mentioned earlier when talking about the theme of Apollo.

Something that’s really great about this game is that it has four progressive jackpots that you can win on any given spin. Their current values are listed at the top of the main game screen, and the main jackpot is always worth at least six figures.

Here are the minimum values for the four jackpots:

Note that the smallest two of these jackpots actually pay out several times each day, so they hit pretty often even though they are on the smaller end of the set.

To win one of these jackpots, you get a random chance of triggering a second screen bonus feature after each turn. It doesn’t matter how much you wager since you’ll always be qualified to win one of these prizes, but your chances of winning them increase with the size of your bet proportionately. For example, a wager of €1 would have half the chance of winning a progressive compared to a bet size of €2.

How to Win at Age of the Gods: Apollo Power

Games that have an extremely high volatility are known for their big swings that can wipe out your account balance over just a few sessions if you aren’t careful. Since this game gives you proportionate chances to win the progressives with smaller wagers, out advice is to use smaller bet sizes than you normally would.

You can even pair this with longer sessions at the same game, but the end result is that it will smooth out a lot of the swings that come with the high variance that this progressive jackpot slot offers.

Payout Structure for Age of the Gods: Apollo Power

After the top pays from the wild symbol, the next highest symbol is Apollo himself. He’ll pay 600x for six, 250x for five, 100x for four and 40x for three of a kind combinations.

At the low end of the pay table, you’ll have the red A, green K, blue Q and purple J symbols. They each pay 50x for five of a kind combinations.

What you can clearly see from the Age of the Gods: Apollo Power video slot is that Playtech wasn’t just looking to slap something together and expect people to play it. Instead, they made sure that the motif of the game with Apollo ran deep into every aspect of the theme and gameplay.

The level of immersion given by how cohesive the different parts of the games are is only something you really see from experienced software developers, and it helps to create a smooth type of experience that players come back to over and over again.

Which online casinos have Age of the Gods: Apollo Power?