Age of the Gods: Fate Sisters 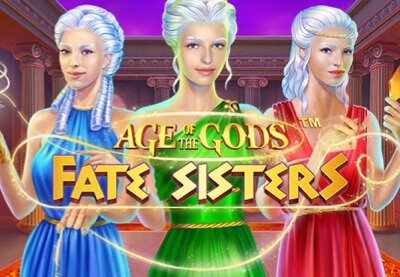 The Age of the Gods: Fate Sisters slot by Playtech has their Ultimate Power progressive jackpot with four different prizes available on each and every spin. This game centers around the three sisters of fate, and each of them has a different free spins mode that you can get in on. On top of that, other features make it easier to get wins on the reels than you would otherwise have, which means a ton of extra action. Compare online casinos with the Fate Sisters slot below and play with a welcome bonus.

Casinos with Age of the Gods: Fate Sisters

Introduction to Age of the Gods: Fate Sisters

The first thing that players will see when they load up the Age of the Gods: Fate Sisters progressive slot is a bright temple in the background with purple reels in the foreground with symbols over them. This is the perfect color scheme for this game considering who it’s centered around: the three sisters of fate, also known as the Moirai, who controlled the destiny of all beings.

Even Zeus had to bow to the Moirai, and that shows just how important they are in Greek mythology.

With that having been said, we have the gameplay aspect of this title as well. In any game with big progressives, they will obviously be a major source of the focus, but this slot goes beyond that with multiple free spins bonus rounds and other features to keep the sessions fresh and exciting each time you play.

In any progressive title, the betting options and how the game is laid out will both be of importance. Consider the following:

A critical piece of information to know is that all bet sizes all eligible for the progressive jackpots because of how they’re set up in the Age of the Gods: Fate Sisters video slot, and that’s something that’s particularly friendly to small stakes players.

The gameplay of this title is based largely around a set of bonus features. Some of these are different free spins modes, but others dictate your chances to win during the regular game mode. Both sides of this coin are important because both add to your bottom line, and neither should be ignored because of this.

There’s a wild symbol that looks like a golden coin. This will helps to get wins with all symbols except for the scattered bonus symbol. You can get winning combinations with these wilds since they appear on all five reels, and those wins look like the following:

In particular, the payout for five of the wild on an activated payline is larger than the top jackpot in most online slots in general, and it’s not even the largest prize in this game because of the progressives, which makes it even more impressive.

A glowing, floating blue pool of energy is the scatter, and like the wild, it makes an appearance on every reel. It’s a bonus symbol in the Age of the Gods: Fate of Sisters online slot, but it also gives you payouts based on a multiple of your entire wager. Here we’ll show you the wins for these combinations along with what the equivalent payout would be in terms of line bet wins with all lines activated:

Keep in mind that these payouts are actually better than they might initially seem since you don’t have to land them on any certain reels or paylines to get paid.

Lachesis, Clotho and Atropos are the three sisters from the title of the game, and each of them has a dedicated free spins mode. If you pick up at least three of the scattered bonus symbol at once, then you’ll get to pick between the following three free spins modes.

Lachesis’ Temple – In this mode, you get 10 free spins to start. You’ll have wilds that stay sticky for three reels, and any scatters that land behind these locked wilds will count towards your totals. Moreover, you can get three extra free spins for a Lachesis symbol anywhere on the third reel.

Clotho’s Temple – With this mode, you get three randomly placed wilds on the reels for each spin, but this is compensated for by the fact that you only get eight free turns, which is the fewest for any of the three modes. A Clotho symbol on the third reel adds three free spins, and scatters that land behind the random wilds will count for your payouts.

Atropos’ Temple – Finally, players can get 15 free spins with random multipliers on each spin for 2x to 5x that apply to everything but the progressive wins. Each time you get Atropos on the first, second, fourth or fifth reel, the multiplier increases by one. If she doesn’t appear on any of those reels, it decreases by one. Additionally, if she shows up on the third reel, three more free spins are added to your total.

We think this is a cool variety of bonus modes with players getting a choice between the three so that they can choose the gameplay style they want for their free spins.

If you get Lachesis on the first reel, Clotho on the third reel and Atropos on the fifth reel, then you’ll activate the Age of the Gods: Fate Sisters slot’s Sisters’ Gift bonus round. All three of these sisters will be locked in place for one re-spin, and all of the sisters’ payouts become based on scatter wins during that spin. What’s more is that you can also get paid for just two of a kind for these symbols during this bonus round, which is normally not the case.

The main draw of this game is the set of four progressive jackpots. In order from largest to smallest (as well as hardest to win and easiest to win), they are as follows:

The smallest two jackpots, Extra Power and Power, will pay out several times a day most of the time with the Power often paying out every other hour or so.

After each spin, regardless of how the symbols fall on the game board, players get a chance to randomly trigger the Ultimate Power bonus feature. This brings up a 5×4 grid of golden symbols, and you’ll pick from them until you get a matching set for one of the jackpots. This is the jackpot that you will win.

We want to point out that there’s no betting limit required to qualify for these progressives. That means that you can win them in their full value no matter how much you wager or if you have all paylines activated.

How to Win at Age of the Gods: Fate Sisters

In most slots, you don’t get many options that can actually change your chances of winning. However, in this title, there are some things that will manipulate those odds, and players should be aware of them.

First and foremost, if you play with fewer than 25 paylines, then you will have a worse payout rate than if you play with all of them activated. It doesn’t matter what your coin size is for this either because it affects things in terms of a percentage by dropping your RTP or return to player percentage.

Payout Structure for Age of the Gods: Fate Sisters

The payout structure for this game heavily centers around balanced payouts at the medium and low levels while it uses the progressives to fill things in at the upper end. The three sisters themselves pay from 500x to 100x for five of a kind, which are all solid mid-level wins, but they are the highest-paying non-wild and non-scatter symbols in the slot as well.

Two other symbols with shears and a magical candle pay out 90x apiece for five on an activated payline, and then things drop down the card rank symbols.

We think it’s critical that we offer both the good and the bad when it comes to looking at games like what Playtech has to offer here. This gives players a more accurate idea of what to expect, and it helps to make it easier for them to find titles that better fit what they are looking for.

Here are some pros of the Age of the Gods: Fate Sisters online slot along these lines:

Likewise, we have a couple of things that might be negatives for some players:

While we don’t think these disadvantages are big deals at all, we still want to point them out because some players might care a lot about them.

The Age of the Gods: Fate Sisters is a good example of Playtech using some figures from Greek mythology, that we don’t think have ever been used in an online slot before. While this title has been around for years, it keeps a pretty solid interest level from players just because of its gameplay and because it has a style of graphics that holds up well over time.

If you’re the type of player who likes having a chance to win a life-changing sum of money without having to sacrifice high-action gameplay with a reasonable hit-rate and a lot of features, then this is a title to check out.

Which online casinos have Age of the Gods: Fate Sisters?