Age of the Gods: Furious 4 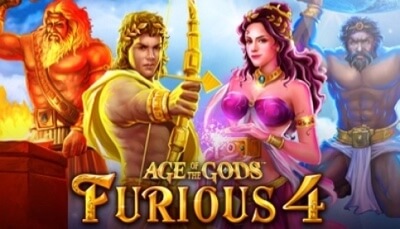 The Age of the Gods: Furious 4 online slot by Playtech centers around four important figures from Greek mythology: Apollo, Pandora, Hephaestus and Atlas. They come to the reels to give you lots of strong payouts and four different free spins game modes. There are also four progressive jackpots available in this game with the top one paying out a minimum of six figures.

Casinos with Age of the Gods: Furious 4

Introduction to Age of the Gods: Furious 4

Greek mythology is full of tons of interesting stories and figures, but unfortunately, only a handful of them tend to get much attention. Playtech’s Age of the Gods: Furious 4 video slot gives you a chance to get in on the action with four figures who aren’t always talked about that much.

There’s Apollo, the god of music; Pandora, the woman who brings evil into the world; Hephaestus, the blacksmith to the gods and Atlas, the titan who holds up the world on his shoulders.

These four figures are involved in various stories with each other, and they’re tied together in important ways because of those narratives. Playtech has taken a little bit of liberty with this in this game without going into too much depth on how those stories combine to instead focus on gameplay. Strong features, a top-heavy pay table and a ton of action are waiting on you when you enjoy this title as a result.

What you can see pretty clearly is that Playtech has this game set up in a way that allows for players at all stakes to enjoy it. No matter if you’re a low stakes player or a high roller, you can get in on the action with chances to win the progressive jackpots and everything else that this title has to offer.

The features are what drive the majority of this title, though the pay table itself is pretty solid. We’re going to walk you through each important feature to show you how it pays, when you can expect it and how you can activate it. We’ll also look at the features that happen in the regular game as well to show you how they work and anything else you need to know about them.

On every one of the five reels in this game, you can see a golden coin with a “4” on it. This is the wild symbol for the game, and they will help you to get winning combinations that you would have otherwise missed out on.

The one thing to note about this symbol is that it does not substitute for the golden throne scatter, which we’ll talk more about below.

There’s a golden throne symbol on a blue background with a gold trim and a red cushion. This symbol is the scatter for this title, and it earns players 200x for five of a kind located anywhere on the game board. The wins for four of a kind and three of a kind are 25x and 5x, respectively.

However, note that these are multiplied by the total bet size. That means that a five of a kind win is actually worth the same as a 4,000x payline prize (assuming that all 20 paylines are activated), which makes it the second-highest payout in the whole game.

When you get at least three of the scatter symbol on the board, you’ll be taken to a free spins mode with 12 total spins. These spins are broken up across four different game modes based on the four figures from Greek mythology used as the basis of this slot. The modes are as follows:

Three free spins are had on each mode before advancing to the next one. You cannot re-trigger the feature during this mode, but there’s enough value given here that it’s not really that big of a deal in the grand scheme of things.

The real thing that draws most players to this title is the set of four big progressive jackpots that can be seen in tickers at the top of the screen. The four jackpots along with their seed values (ie: the minimum amount you can win on them) are as follows:

The smaller jackpots hit the most often, but it’s worth noting that the big six-figure Ultimate Power jackpot averages paying out about half a million euros, so that’s definitely a life-changing sum of money that you can win on any given spin.

It’s also worth noting that you don’t have to hit any particular winning combination or play above certain levels of stakes to cash in on these jackpots.

How to Win at Age of the Gods: Furious 4

To maximize the chances of you winning at this game, it’s really important that you keep the number of paylines at 20. Even if that means you have to choose a lower bet size per line, your return to player percentage will be the highest if you keep the paylines maxed out.

From there, you can counter some of the variance by picking smaller bet sizes and playing with sessions that are longer than usual. Your chances of winning a jackpot over the course of a session is proportionate to the total amount in bets that you put in during that session, so you can have a lower variance with the same chances to win a jackpot in this game by following this type of strategy.

Payout Structure for Age of the Gods: Furious 4

A critical part of understanding how gameplay goes in this title is having a feel for the pay table. Aside from the wins for the wilds and scatters, there are four primary symbols based on the four figures from the name of the game.

Six card rank symbols make up the bottom tier of payouts, but the prizes they give are bigger than you might expect. Five of the A or K will get you 250x, and you can make it 150x for five of the Q or J symbols. A win for five of the 10 or 9 gets you 100x also.

We always try to provide as objective of a view as we can of the games we review, and this one is no exception. Here are the highlights of what we like the most about this title:

We also have a couple of disadvantages for this slot:

These aren’t things that many players will care about, but we want to point them out to give a balanced view of the Age of the Gods: Furious 4 progressive slot.

With the Age of the Gods: Furious 4 online slot, you’ll get a lot of action through the four-phase free spins mode, the big progressives and the top-heavy payout table. It’s definitely not a game for players who prefer a low-volatility experience, but if you want real chances at some serious payouts, it’s a title that will give you that in a big way.

Which online casinos have Age of the Gods: Furious 4?