Age of the Gods: Goddess of Wisdom 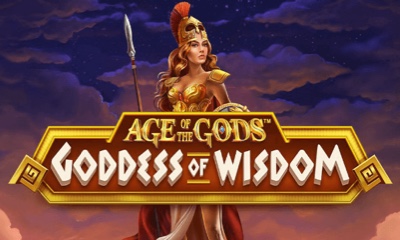 In Greek mythology, Athena is the goddess of wisdom and military strategy, and she’s at the center of the Age of the Gods: Goddess of Wisdom progressive slot produced by Playtech. This title is tied into their Ultimate Power jackpot link with a top prize that always pays at least €100,000. On top of that, there is a free spins mode based around defending a city that’s being attacked, and that ties into the strategic warfare side of this goddess.

Casinos with Age of the Gods: Goddess of Wisdom

Introduction to Age of the Gods: Goddess of Wisdom

When Zeus swallowed her mother, who was pregnant at the time, Athena came forth from his forehead. She had the wisdom of her mother, who was so crafty that Zeus decided to eat her to prevent her from challenging him, but Athena also got the strategic understanding from Zeus as a result.

This concept is at the heart of the Age of Gods: Goddess of Wisdom video slot, and you’ll see it tied through both the visual and gameplay motifs of this title.

The graphics of this game include lots of different symbols that tie into various aspects of Greek mythology that directly tie into Athena. Aside from that, she also makes appearances on the reels to help you with features. It’s a pretty big deal that this game is tied into one of Playtech’s biggest and most popular jackpot links as well.

Something really cool that Playtech has done with the entries to their series of games based around the Ultimate Power jackpots is that they have all kinds of different formats and gameplay types. Here are the things you should know about the layout and betting for Age of the Gods: Goddess of Wisdom:

Playtech has clearly put some effort into arranging everything on the screen in a way that keeps it organized without making it feel crowded as well.

Gameplay in the Age of the Gods: Goddess of Wisdom progressive video slot centers largely around a set of really notable top wins for the highest-ranking symbols. These are impressive given that there are four progressives already available in the game. A few other important features can be found in this title as well.

The wild symbols are Athena in this title, and that’s not all that surprising considering she’s the center of the entire theme of the game. You’ll find her on the second, third and fourth reels only, so she’s not going to give you winning combinations without the help of other symbols.

The white owl is a symbol that is tied to Athena in Greek mythology, and here it’s one of the two most important symbols in the game. She would often take this form in various stories, and you’ll get payouts for two or more on the game board along these lines:

These wins are multiples of your total wager. To give an idea of how they compare to line bet wins, a 100x win by your whole wager is like a 2,000x line bet win with all paylines activated.

Three or more of the owls (not two, which only gets a 2x payout) will trigger the Battle Game bonus feature. Here you’ll get three options with expanding wild symbols no matter which of the three options you choose. The option you choose is based on the three highest-paying symbols in the game, and that’s worth noting because the one you pick will replace the other two on the game board during the free spins mode for easier chances to get top-tier payouts.

The reason the first one is an option like it is has to do with the fact that the payouts for the Medusa head symbol are several times larger than the other two. With the high symbol replacement aspect of this bonus round, it gives you some extra consideration about which one you should pick that maybe you wouldn’t have had before.

With the Ultimate Power network progressive jackpot set, you get four ways to get paid a pretty substantial amount. This chance is basically random on every single spin, so no matter how much you’ve wagered or how many paylines you have activated, you’ll still have a non-zero chance to win each of the jackpots.

We want to point out that with the Power and Super Power jackpots, while they are fairly small overall, they hit several times each and every day, which means things are balanced out pretty well with them in terms of the overall value they provide to the game.

On any random spin, with chances proportionate to your total bet size, players can get a chance to be taken to the jackpot bonus round. When you go here, you’ll pick between various coins until you get a number of matching jackpot symbols. The symbols you get determine, at random, the jackpot that you’re awarded. Your prize is paid, and then you go back to the regular gameplay.

How to Win at Age of the Gods: Goddess of Wisdom

Another way to maximize the RTP is to only choose to play this game when the Ultimate Power jackpot is relatively large. If it’s less than €200,000, then picking another game wouldn’t be a terrible idea so that you can wait to get the most out of your winning chances.

On top of that, another strategy that can manipulate the swings you get while playing is to keep your bet size relatively low while playing longer sessions than you might normally. You end up with chances to win a jackpot that are similar to playing as usual, but the swings are lowered in exchange for playing for longer periods of time.

Payout Structure for Age of the Gods: Goddess of Wisdom

Because of the way the Battle Game bonus feature works with players having one top symbol replace others, the structure of the pay table is incredibly important in this game. Here are the highest tier symbols and their top payouts:

There are a few things to note here. First, all five of these symbols pay for just two of a kind or more, which is something that increases the overall hit-rate with some small wins to help keep you afloat while you shoot for the big jackpots. Second, the top wins are pretty substantial considering that this is also a title that has four progressive jackpots.

At the bottom end of the pay table, this slot has A, K, Q, J, 10 and 9 card rank symbols in different colors. They pay 200x to 150x for five of a kind combinations, and they all require at least three of a kind for a win.

There are a lot of things about the Age of Gods: Goddess of Wisdom online slot that we like, but here are a few highlights that stand out the most:

Here are a couple of things some players may not like about this game as well:

We don’t personally think that these are that big of a deal, but we want to put them out there so that you can decide if this is a game that’s a good fit for you as an individual.

There’s nothing quite like taking down a big progressive jackpot, and you’ll have that chance on all spins at all stakes with the Age of Gods: Goddess of Wisdom title from Playtech. From the guaranteed six-figure top prize even at the smallest bet sizes to the multiple static wins in the four-figure range and the smaller progressives that hit very often, players will have plenty to look forward to in this game, and that’s not even considering the multiple bonus features.

Which online casinos have Age of the Gods: Goddess of Wisdom?