Age of the Gods: Ruler of the Sky 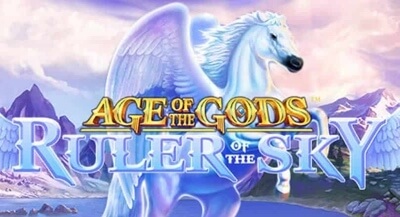 The Ruler of the Sky entry into Playtech’s Age of the Gods progressive jackpot slot series has four different progressives, and the top prize is always worth at least €100,000. With a theme based on Pegasus from Greek mythology and a value-packed free spins bonus round, this is a game that gives players a lot of sources of value.

Casinos with Age of the Gods: Ruler of the Sky

Introduction to Age of the Gods: Ruler of the Sky

If you’re the type of player who loves Greek mythology, then the Age of the Gods: Ruler of the Sky online slot from Playtech is the kind of title that will be right up your alley. It has a theme based completely around Pegasus, the winged horse who is usually an afterthought in many of the Greek myths. Here, he gets to hog the spotlight with a game centered around this beautiful beast.

The theme of Pegasus being the Ruler of the Sky stands out as being one of the only times this character gets the focus in a popular online slot.

In terms of gameplay, there’s a lot going on here as well that’s worth noting. The action is very fast-paced, but it’s not just the progressives that are important here. Strong features and a balanced pay table with lots of upper-end and mid-level pays give you more ways to end your sessions on a strong note.

One thing that Playtech has done with this series of games is give them all somewhat different formats and degrees of wagering. This helps to keep them from seeming too similar to each other. Along those lines, here’s what you can expect in the Age of the Gods: Ruler of the Sky online slot:

What’s really great here is that there’s such a huge range of bet sizes available while you can fully quality for the progressives no matter how much you’re wagering per spin.

A good mix of features and a balanced pay table create the backdrop you play on while shooting for one of the top progressives. In what follows, we’ll look at all of the major features and what you need to know about how they appear and what they pay.

The wild symbols in this game are Pegasus, which isn’t surprising considering he’s the focus of the entire slot. Wilds appear on all five reels, and they will substitute for everything but the scattered bonus symbol that we’ll look at down below.

Here are the payouts for the wilds:

No matter how many wilds you get on a reel, you will always get paid the best individual prize available for the symbols located on each individual payline. That helps to make sure that you get the most value you can out of each and every spin, and it’s the most fair way to handle that sort of thing.

On the second, third and fourth reels, you’ll sometimes see an Age of the Gods/Pegasus logo symbol with a golden sunset background. This is the scatter, and it pays out a 3x win (multiplied by your entire wager) whenever you get all three on the reels at the same time.

This symbol is also responsible for triggering the free spins bonus feature that we’ll look at below. However, we want to note two things. First, the wild symbols do not substitute for the scattered logo symbols. Second, it doesn’t matter which positions the logo scatters fall in; they will trigger the payout no matter what as long as they show up anywhere on the game board at the same time.

When you get all three of the scatters across the second, third and fourth reels as we described above, then you’ll have a set of five free spins to play through. There are a few key things to know about this feature:

While this feature is pretty straightforward, it brings value in a serious way because of the extra wilds, and it’s pretty easy to see how that could translate to a nice run of significant wins, especially when you see the distribution of the regular pay table.

At the top of the reels, you’ll see tickers for four different progressive jackpots. The Age of the Gods: Ruler of the Sky progressive slot gives you four ways to win a random prize that’s pretty sizable, and it comes in the form of these four jackpots.

The seed values for these jackpots are as follows:

It’s important to note that while the minimum value for the Ultimate Power jackpot is €100,000, it actually hits around €500,000 on average and has made people into millionaires in the past.

To win this jackpot, you’ll actually just be awarded one of the jackpots at random on any given spin. You don’t have to bet a certain minimum amount to have a chance to win, and that means that even low stakes players have opportunities to win a life-changing sum of money in this game.

How to Win at Age of the Gods: Ruler of the Sky

You really get two options that change the betting that can affect your chances of winning. The first is the number of paylines, and the maximum is 40. You should keep this at the maximum because that’s what maximizes your overall payout rate (ie: your return to player percentage). Refusing to do this will mean you win less over time, on average, no matter what stakes you play.

The second betting option is the size of your actual bet. If you want a smaller bet size, change this instead of changing how many paylines are active. Because this title has such a serious volatility, we recommend that players choose a bet size on the lower end of what they’re used to so that it can eat some of the swings that come along with a game with this much variance.

Payout Structure for Age of the Gods: Ruler of the Sky

We mentioned up above that five of the wild gets you a 1,000x win, and three of the scatters on the middle three reels pays 3x your entire bet, which is like a 120x line bet win. However, there are some other mid-level and low-end wins that are pretty important to note because of how balanced the pay table is for this game.

In the middle levels, you can get 400x for five of the temple. From there, there are three symbols that pay 250x for five of a kind: the vase, the harp and the helmet.

We like this game for a variety of reasons, and we want to make sure that we show players both the pros and cons of what this title has to offer so that they can go into it with their eyes wide open. Here are the highlights of what makes this title great:

Additionally, there are some things that some players may not like about this slot:

Those things aside, the pay table does a good job of giving you a great value as well.

With so many games out there in the online slots world that have Greek mythology-based themes, we think that Age of the Gods: Ruler of the Sky is a good example of Playtech making a game stand out both in terms of gameplay with the big progressive top prize and with the theme itself being just a little off of what’s usual.

Which online casinos have Age of the Gods: Ruler of the Sky?