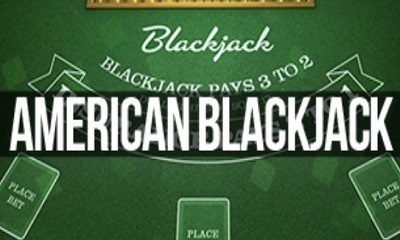 The American Blackjack games from Betsoft offer players a North American style of the game. With forced dealer peeking, limited doubling and an overall rule set that lends itself to more simple strategies, this is the perfect game for both recreational and more serious blackjack fans.

An Introduction to American Blackjack

You’ll find no shortage of multi-deck blackjack games out there online. However, Betsoft’s known for making sure the individual games in their selection stand out. That’s exactly what they aimed for with their American Blackjack tables. We have to say that they were very successful in that aim.

What makes this type of blackjack stand out so much is the specific style of gameplay and great presentation.

The way the board is laid out is excellent with three positions the player can play. This means up to three hands can be played simultaneously for even more action. On top of that, they went with a traditional full style of card instead of the miniature versions. This makes the game come across as more professional and upscale. Additionally, the sleek style of the tables with the green felt and brown leather cushions doesn’t hurt the situation to say the least.

As for the rule set and gameplay, it’s pretty strong as well. The action moves along at a quick pace on the default setting. However, Betsoft has given players two additional speed options. You can make the game go faster if you want, or you can slow things down and enjoy the experience that way. For strategic fans, you’ll enjoy how the rule set offers a fairly high payout percentage of 99.35 percent for correct play. However, recreational players will enjoy how they aren’t punished that much for small mistakes thanks to the way the rule set was put together.

We’re going to start off by looking at the gameplay procedure and basic rules. From there, we’ll get into the more advanced rules and what you’ll need to know about specific types of situations that can come up.

To start things off, this game is based on having hands that are worth different numbers of points. Additionally, the points are based on the cards in your hand. If you have cards that range from 2 to 10, they’re worth the amount shown on the card itself. However, jacks, queens and kings are also all worth 10 points. With the aces, they can be worth 1 or 11 at the player’s discretion, and you can switch between the two at will during a hand with no penalty. In fact, the game’s calculations do this for you automatically based on whichever will give you the best possible result.

Note also that hands with an ace that is counted as 11 are called “soft” hands. Additionally, based on this scoring system, you should also know that having a total of 22 or more is called busting. When you bust out, you immediately lose the hand regardless of the rest of the action.

With the basics of the scoring system out of the way, let’s look at how a hand can play out.

How Hands Are Dealt and Played

When it’s your hand’s turn, you’ll have a few different options on how you can play it. However, we’ll explain those options further down. With that said, here’s what you can expect for a single round of play:

If you’ve never played before, this can seem like a lot. However, it actually goes really quickly and isn’t that much to learn once you’ve played a few rounds.

When it’s each of your hand’s turn to play, you’ll make your choices for that hand until the turn is over. From there, you’ll proceed to the next hand. This repeats until all of your hands have made their decisions.

Here is a quick look at the different options you have available at this time and when they can be used:

Surrendering, switching and other non-standard options are not available in this title.

The Insurance Side Bet

If the dealer is showing an ace or a card worth 10 points, you’ll be prompted for the insurance side bet. You win at a rate of 2:1 if the dealer has blackjack when you make this wager. However, you’ll still lose your original bet.

Generally speaking, you should never take insurance in this game as it’s not profitable to do so. However, some players like to play it like an extra side bet just for fun.

Other Rules and Special Cases

At Betsoft’s American Blackjack tables, you’ll have a few other rules that are important to point out. This is because these tend to regard specific, uncommon situations that vary from game to game.

For most players, the specifics of these rules don’t change much. However, they can affect small issues if you’re really deep into blackjack strategy, which is why we have them listed here.

How to Win at American Blackjack

The best approach to American Blackjack is to start off with a basic multi-deck strategy. From there, you have to compensate and adjust for the very strict doubling rule. This rules out a lot of doubling situations with soft hands and hard 9s. However, this actually makes the game easier to play because there is less to remember.

Overall, this is title with strategies that are on the easier and less complicated end of the blackjack spectrum.

We really like how Betsoft handles their American Blackjack game. It has the more simplistic strategic standpoint with the limited doubling that makes it a great choice for both recreational and serious players. Additionally, it puts you in a position where you can triple your action by playing up to three hands at a time. It’s really the kind of representation the sub-genre needs in terms of variety without just adding side bets mindlessly like what we see with a lot of the competition.

Which online casinos have American Blackjack?